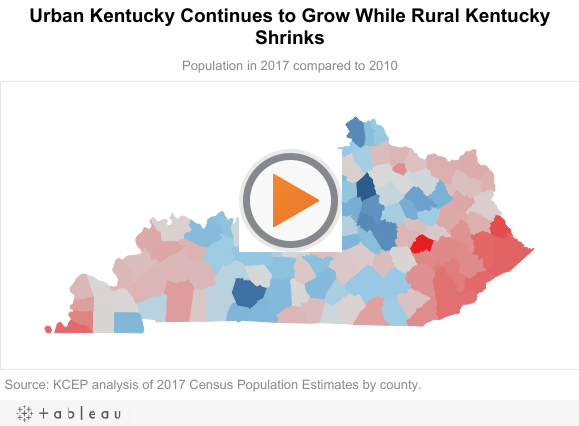 Recently released population estimates from the Census document how much Kentucky has continued to urbanize over the last seven years. Not surprisingly, rural eastern and western counties’ populations have dropped while the “golden triangle” and the area around Bowling Green grew. Overall, between 2010 and 2017, Kentucky grew by an estimated 106,240 people or 2.4 percent. But that growth was dramatically lopsided toward growth in urban areas.

By percent, the counties (all rural) that saw the largest loss of population between 2010 and 2017 were:

The counties (all urban) that saw the largest percent growth were:

When looking at the number of people who left counties, Pike had by far the greatest decline with 6,190 fewer residents. Unsurprisingly, Jefferson and Fayette counties saw the largest growth with 29,140 and 25,260 more people respectively. 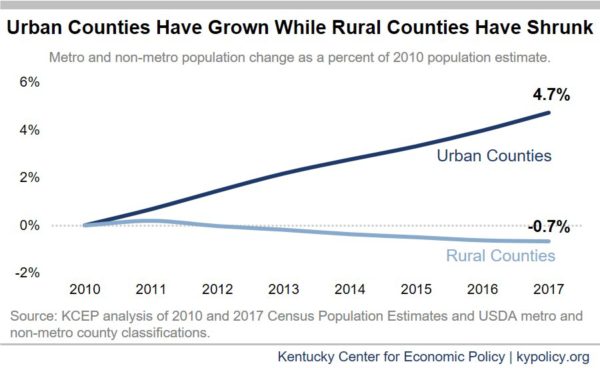 The national trend of urbanization is longstanding, but the hastening decline of coal and certain types of manufacturing jobs in Kentucky are almost certainly contributing to the decline in some rural counties’ populations. In fact, since the Great Recession, job gains have been concentrated almost exclusively in urban and suburban areas, the same areas that have seen the lion’s share of Kentucky’s population growth.

These trends raise concerns about the impending requirement that Medicaid enrollees meet a certain number of hours of work activities or else lose coverage and the similar requirement for food assistance that is currently being reinstated. As distressed rural economies shrink, job opportunities also contract leaving people unable to fulfill these requirements and keep health care and food assistance. In turn, fewer people with health coverage and help at the grocery store will take important resources out of these communities, very likely causing job losses in health care and grocery stores but also in other sectors.

The shrinking population in rural counties also presents a problem for local governments for whom the tax base dwindles even as the need to invest in good schools and roads remains.