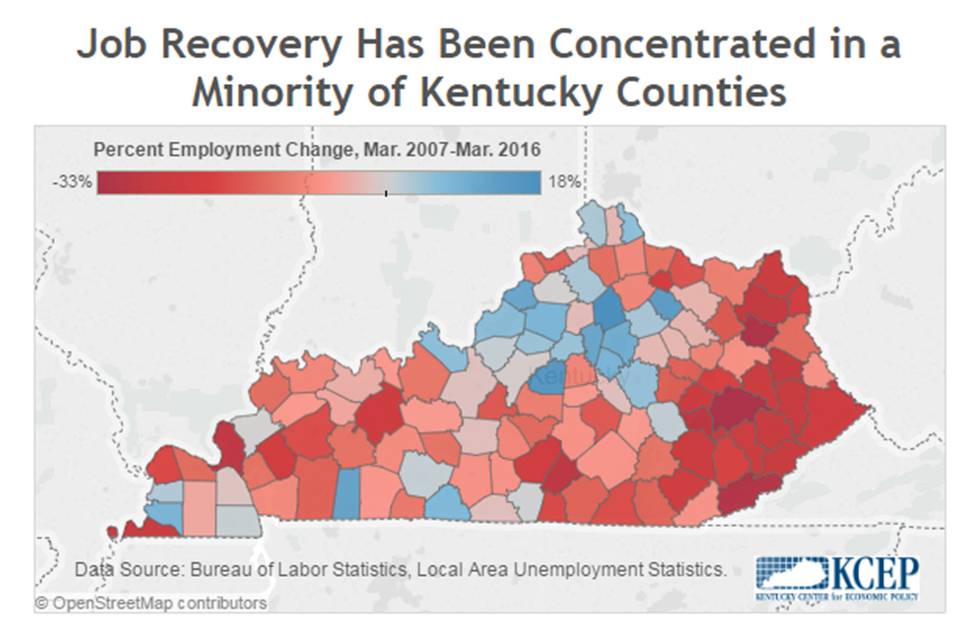 Job growth in Kentucky’s recovery continues to be concentrated in a minority of counties located in more prosperous parts of the state while many rural Kentucky counties face employment conditions that are much worse than before the Great Recession — and in some instances are worsening.

As was the case a year ago, only 28 of Kentucky’s 120 counties had more people employed in March 2016 (the latest month available) than in March 2007, according to Bureau of Labor Statistics data that looks at employment by county of residence (see map below). Five central Kentucky counties — Scott, Washington, Nicholas, Oldham and Woodford — have experienced employment growth above 10 percent over that time period (as has Todd County). In raw numbers, employment increases are by far the highest in Jefferson County (19,592) and Fayette County (13,195), with job growth of 6 percent and 9 percent respectively since 2007.

In contrast, 24 counties have seen a 20 percent or greater decline in employment since 2007. Most of these steep job losses are in eastern and northeastern Kentucky counties or parts of western Kentucky. Employment declines exceed 30 percent in Breathitt, Elliott and Harlan counties. Five counties have at least 4,000 fewer people employed — Pike, Boyd, Christian, Greenup and McCracken — an increase from 2 such counties a year ago.

Gaps between some growing and declining counties appear to be getting larger. A total of 51 counties have fewer people employed in March 2016 than in March 2015. Five counties have at least 3 percent fewer jobs than last year, with Harlan County seeing the biggest drop at 3.9 percent.

While Kentucky’s economy overall shows improvement, the economic well-being of regions of the state are diverging. Industry trends play an important role. Certain manufacturing sectors like the auto industry have bounced back as have industries like warehousing and logistics, all of which rely on areas of the state with access to markets and infrastructure. Construction has begun to rebound recently and the health care sector has also grown. Job losses reflect in large part a decline in coal employment and specific manufacturing industries like computer and electronic products, steel, clothing, and wood and paper products.

Federal and state policymakers should be putting much greater emphasis on economic relief and job creation strategies in hard-hit areas of the state. That means expanded investment rather than more budget cuts in infrastructure, education and human services; fairer trade policies than those that have harmed Kentucky manufacturing and no more deals designed to benefit powerful interests; expansions of the safety net rather than a weakening of it; and specific development strategies for regions like the coalfields experiencing fundamental economic transition. That will require Congress to pass laws like the RECLAIM Act, which would release $1 billion to restore abandoned mine lands in coalfield communities.

To view a larger version of this map, click here.