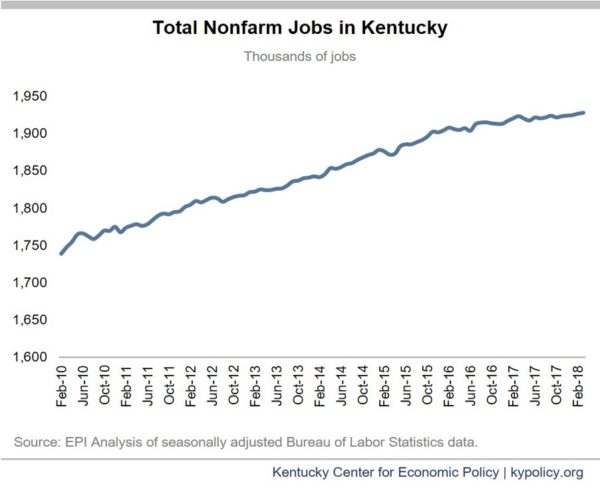 New data released last week showed that Kentucky’s unemployment rate has now reached 4 percent, the lowest level since 1976. Continued overall economic recovery is good for the commonwealth, but the state is far from “mission accomplished” and the wrong conclusions should not be drawn from this indicator alone.

The primary contributor to the condition of Kentucky’s economy is the state of the U. S. economy, which is experiencing one of the longest economic recoveries on record. As shown in the graph below, job growth in Kentucky is not a new phenomenon brought about by any change in political leadership or adoption of a new policies, but a gradual climb since February 2010 when employment hit its trough from the Great Recession. 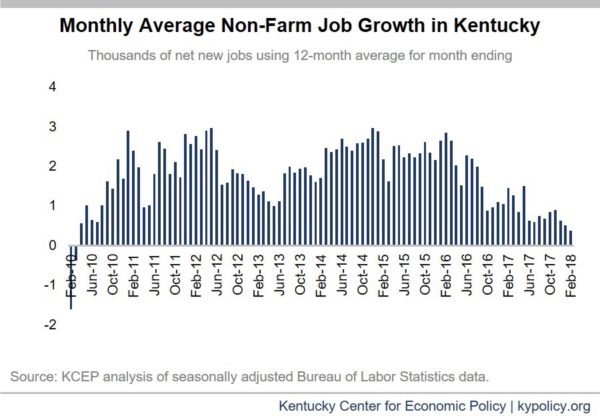 Nevertheless, continued growth in jobs and reduction in the unemployment rate is beneficial because it puts more people to work who need jobs. In addition, the closer the state gets to full employment, the more pressure there is for employers to increase wages at the bottom and middle of the labor force to attract scarce workers. There is some indication that the low unemployment rate is resulting in modest pressure on employers to raise wages, though significant slack clearly remains.

That’s because the overall unemployment rate doesn’t tell the full story of the job situation for a few reasons. First, it only counts people as unemployed who have looked for work in the last four weeks. Because of a weak economy for much of the last decade and problems facing certain parts of the state and populations, there remains an elevated number of Kentuckians who are considered discouraged workers—not employed and not currently (within the last four weeks) seeking employment. The best measure to understand the overall employment situation is simply the percent of the working age population that is employed (EPOP). Despite our low unemployment rate, the EPOP is still not back to pre-recession levels and is far below where it was in the stronger economy of 2000. 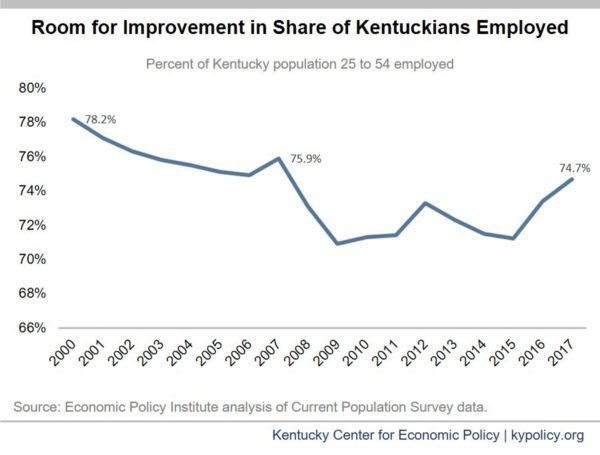 Parts of the state still face a big shortage of jobs, especially in rural areas like eastern Kentucky. And some people face barriers to employment including discrimination based on race, having a felony on record, and lack of access to affordable child care and transportation made harder by the fact too many jobs pay low wages.

Continued progress is good, but should not be overstated. Kentucky isn’t experiencing a jobs bonanza as some claim, but rather a slow pace of job growth that is cause for concern. And the persistent lack of good jobs for certain places and groups of Kentuckians should spur a conversation about how to create opportunity for all Kentuckians. We need greater federal and state public investment in infrastructure and public service provision to spur more jobs today, and not additional budget and benefit cuts that take dollars out of communities and make life harder for those struggling to get by.