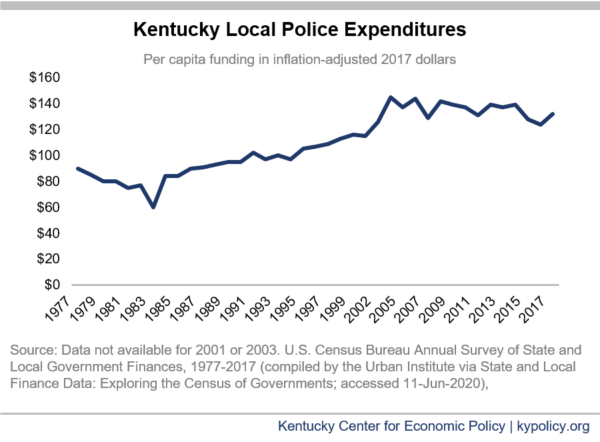 With the recent police killings of Breonna Taylor, George Floyd and David McAtee – in a long history of state-sanctioned violence against Americans who are Black – protests are occurring in the commonwealth and across the nation. Conventional reforms such as the use of body cameras have been inadequate in stopping police violence and there is a growing discussion about reallocating public resources toward more effective investments that address the root causes of challenges facing communities. In addition to immediate justice for the victims of police violence, their families and communities, Kentucky must make policy changes that prevent future harm and invest in the systems that all communities rely on to thrive.

Sparked by recent police killings, since May 28, communities across Kentucky and nationally have seen daily rallies, events and protests in response to the failures of a justice system that disproportionately polices communities of color. Louisville is the site of two of the high-profile recent police killings. Breonna Taylor was killed on March 13 when police entered her home with a “no-knock” warrant. On June 1, as communities across the country were protesting such violence, David McAtee was killed by the National Guard in his restaurant in Louisville.

These killings are not isolated incidents. According to the Mapping Police Violence Project, 1,098 people in the US were killed due to police use of force in 2019. Between 2013-2019, out of the 120 police killings of civilians in Kentucky, 19 were Black Kentuckians. At 15.8%, that’s nearly twice the share of Kentucky’s population who are Black (8.3%).

Across the state, protestors are seeking changes to prevent violence. Though the legislature is not in session, some members are seeking to pre-file legislation in the interim addressing police issues including no-knock warrants – a practice that ACLU Policy Strategist Keturah Herron said is used to “terrorize and harm black and brown communities.” The response in Louisville to protestors’ policy demands has included the suspension of no-knock warrants, creation of a Civilian Review Board Work Group and removal of Chief Conrad as the Chief of Police by the Louisville Metro Government. A Metro Council committee has moved forward an ordinance that would permanently limit the use of no-knock warrants and ensure the use of body cameras, scheduled to go before the full Council for a vote tonight.

In addition to enduring a disproportionate share of police violence, Black Kentuckians are more likely than white Kentuckians to be incarcerated, and also face barriers to education and employment and receive lower pay on average. State Representative Attica Scott recently described “inequities we experience every single day” in an interview on NPR: “You can see it when you drive through the neighborhoods – abandoned and vacant properties, boarded up buildings, the lack of economic development and investment.”

For these and other reasons that are rooted in historical, structural barriers to educational opportunity, economic security, wealth accumulation and health and well-being, Black Kentuckians are dying at a higher rate from COVID-19 and are being laid off from work at higher rates due to the pandemic. The toll of the crisis, and widespread awareness of police brutality as a result of cell phone cameras and social media, may be factors that have contributed to a tipping point for concerted calls for change.

Historian Dr. Ibram X. Kendi wrote in his 2019 book How To Be An Antiracist that “Racism is a powerful collection of racist policies that lead to racial inequity and are substantiated by racist ideas. Antiracism is a powerful collection of antiracist policies that lead to racial equity and are substantiated by antiracist ideas.” Applying this lens to the over-policing of and violence towards communities of color shifts the focus from the ideas substantiating these outcomes to the systems and policies shaping them.

Why do people want to shift resources to non-policing approaches?

A lack of public safety is often a result of social conditions, and policing responds to the symptom but not the root cause. In fact, criminalization of social inequities can inhibit public safety. Strong evidence supports putting resources toward solutions for housing, mental health, food insecurity, unemployment and other factors known as social determinants of health – and targeting those resources to communities that have faced systematic underinvestment. As NAACP Legal Defense and Educational Fund President Sherrilyn Ifill explains, “movements to drastically reduce police funding are at the core of a revised vision of public safety that prioritizes social services, youth development, mental health, re-entry support, and meaningful provisions for homeless individuals that strengthen community resources to proactively address underlying factors that can contribute to public safety concerns.”

Some communities are beginning to question whether police are being given too many responsibilities, and are taking steps to redirect funding to community services. Localities like Nashville Metro Council have seen proposals in the last week to reduce their police department budget in order to pay for a chronically underfunded education system and to increase government and teacher salaries. LA City has proposed an ordinance reducing the police department’s budget by $100-150 million and diverting a total of $250 million to jobs, education, health and healing focused in the city’s Black community. And the Minneapolis City Council plans to replace their existing police department with a more community-based approach to public safety.

There is growing rethinking about the role of policing in other institutions as well. School leadership in Portland, Oregon has announced the removal of School Resource Officers in the city’s public schools. A proposal from Superintendent Guerrero would redirect those resources to counselors, social workers and culturally-specific partnerships throughout the education system. While there is no evidence that school violence has been reduced by the presence of school resource officers, the implementation of restorative justice in school settings is associated with reduced suspensions, expulsions and referrals to law enforcement.

What other changes are being called for?

Other more incremental policy changes are also being explored. Many of these are based on ending practices that disproportionately target communities of color and on restricting use of force – and are thus in sync with shifting resources away from policing and toward community-based services.

For example, many are calling for a halt to stop-and-frisk policing, which allows police to intervene based on suspicion, leading to profiling on the basis of race, immigration status, housing status, religion, gender, sexual orientation, etc. Examples include being stopped, questioned or arrested for furtive movements (such as reaching for waistband or acting nervous), for being in a high crime area or matching generalized description of a suspect. Many advocates are also calling for the end of broken windows policing – a term used to describe criminalizing activities shaped by poverty, structural racism, homelessness and other social inequities. That would include decriminalizing non-violent acts such as disorderly conduct, trespassing, loitering, disturbing the peace, jaywalking, bicycling on the sidewalk, possession and substance use.

Other such changes include ending ticket and arrest quotas, banning officers from taking or destroying phones or other recording devices without a warrant or consent, banning chokeholds and strangleholds, requiring officers to establish an objective justification for making a stop, ending the use of data and software that may enable profiling, prohibiting local police involvement in immigration enforcement, requiring officers to attempt to stop a colleague in an inappropriate use of force situation, banning shooting at moving vehicles and eliminating the use of no-knock warrants. Many legal experts say these practices violate people’s rights, with the most well-known current example being that no-knock warrants violate the constitutional right to reasonable search and seizure.

Harmful practices such as these – in the context of profiling people and criminalizing activities based on race and income – are made even more dangerous by the militarization of police departments, which precipitates greater use of violence by law enforcement. Through the weakening of the Posse Comitatus Act, the passage of the National Defense Authorization Act and the U.S. Department of Defense 1033 program, which distributes surplus military equipment to state and local police departments, localities have access to more military equipment and training than ever before. According to the Marshall Project, Kentucky received over $46 million in military-grade equipment between 1995 and 2014 through the 1033 program. The Kentucky State Police Department alone has received $12 million in equipment, with the remainder going to county-level sheriff and police departments. Ending the flow of military equipment to state and local departments, the deployment of SWAT teams, no-knock warrants, military-style raids and use of force against protestors are important de-militarization efforts.

Other policy changes focus on police accountability for excessive use of force. Currently, police departments across the nation investigate their own complaints on use of force and determine what, if any, disciplinary action should be taken. Nationally, according to the Department of Justice, only 1 in 12 complaints of police use of force results in any disciplinary action, and much use of force goes unreported. So that more complaints are sustained through investigation, some are calling for more independent, transparent and accountable investigative processes such as community review boards to create a mechanism for community members to provide input to police departments through investigation, review and disciplinary recommendations.

States could also require independent investigation and prosecution in cases of police violence. Local prosecutors and police typically work together, making it difficult for prosecutors to bring charges against and conduct investigations on officers. A permanent special office at the state level could be established to investigate and prosecute such cases.

The standards of police union contracts could also be changed, as research suggests those containing barriers to misconduct investigations are more likely to be associated with the killing of unarmed civilians. Sherrilyn Ifill notes that these contracts “often contain provisions that shield officers from accountability… [and] any obligation to report or intervene.’” Kentucky’s Police Bill of Rights results in more disqualified complaints, delays in interrogations and limited oversight. Louisville’s police contracts include the full array of measures that make it more difficult to hold police accountable for misconduct.

Federal intervention has helped reduce violence somewhat in the past. Before the current administration’s Department of Justice announced in 2017 its intent to scale back federal intervention, police departments that received intervention resulting in either collaborative policy change or order by a judge – in which the federal government requires states to make a policy change – had 25-30% fewer police shootings than those that did not.

Unfortunately, evidence is mounting that some reform interventions that have become more common in recent years are not working. For instance, a recent study shows body cameras do not meaningfully affect police behavior, including misconduct or use of force (the use of body cameras has played a role in increasing public awareness about police brutality and through additional policy changes can help hold police accountable). Similarly, providing law enforcement with implicit bias training has generally been shown to be ineffective when not accompanied by other policy changes. According to social psychologist Dr. Calvin Lai, who studies the efficacy of implicit bias training, “changing social environments may be more effective in reducing discrimination than attempting to change individual attitudes within a setting.”