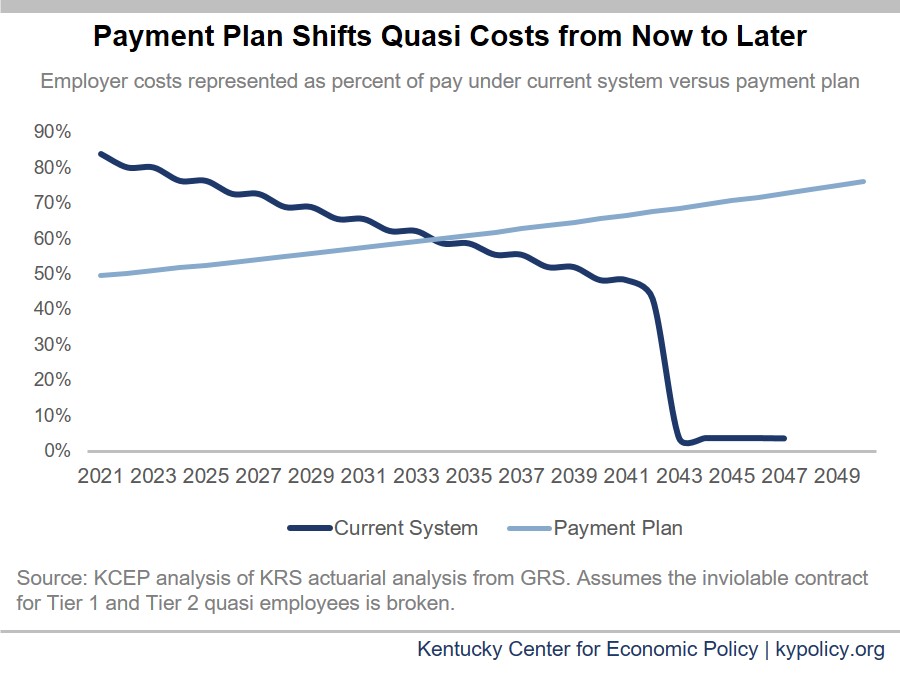 A new pension proposal from the governor’s office pushes quasi-governmental organizations to leave the retirement system in ways that are still very expensive to them, and even less affordable if they would like to keep their current employees who are protected by the inviolable contract in the system.

The proposal is expected to add costs of over $800 million to the underfunded retirement system without identifying any way to pay them.

As in prior versions of the bill, the proposal gives quasi-governmental organizations that want to leave the retirement system the option of paying their liabilities as a lump sum or through a payment plan. The payment plan option starts with an initial payment amount equal to the current quasi contribution rate of 49% of employees’ pay and then increases the payment by 1.5% a year each year thereafter.

According to the actuary, 52% of quasi agencies would not be able to pay off their liabilities in 30 years under those terms, including 80% of health departments. The bill gives those agencies with bigger liabilities relief only if they immediately freeze the pension benefits of their Tier 1 and Tier 2 employees protected by the inviolable contract. Under the bill, those that do so can stop making payments after 30 years with language stating “it is the intent of the General Assembly to pay the additional funding needed by appropriation in the biennial executive branch budget.”

While agencies taking this installment option will have smaller payments initially, they will pay progressively more in the future since their cost increases by 1.5% a year. In contrast, the employer contribution they would pay by staying in the pension system is expected to decrease in the future, as illustrated in the graph below.

If a quasi wants to keep its Tier 1 and Tier 2 employees in the system, it will have to pay even more, and the additional cost is not just related to those employees remaining in the system. First, the costs are substantially higher because the discount rate used to calculate what they owe will make the liabilities bigger — a penalty for protecting their current employees. Second, quasi agencies keeping their Tier 1 and Tier 2 employees in the system will not receive relief on payments still owed after 30 years. Instead, those that cannot otherwise pay their liabilities in 30 years will have to make payments higher than the initial 49% of pay to ensure the debts are fully paid in that time frame.

Under this option, only 25% of quasis will start with a payment at 49% of pay. A full 38% of the quasis will have payments starting at more than 70% of pay, and 6% will see payments of more than 100% of pay (see graph below). From these very high starting points, payments will grow by 1.5% a year until paid off at 30 years—representing an astronomical cost to many of these organizations.

Quasi organizations paying their liabilities in a lump sum rather than in installment payments—which universities are expected to do by issuing bonds —also get a worse deal if they keep their Tier 1 and Tier 2 employees in the system. Total added costs for universities using the lump sum option is $426 million more if they protect the inviolable contract.

Tier 1 and Tier 2 employees stand to lose a massive amount of retirement income if they are taken out of the system and their pensions are frozen, as we reported here and as shown in the graph below. There are 6,700 Tier 1 and Tier 2 employees at the quasi agencies. Employees with 10-20 years of service will lose the majority of their defined benefit pension and many will be out well over $100,000 in net lifetime income.

While the options presented in the proposal for the quasis are still expensive for them, the already-underfunded retirement system will also need more money as a result. The total amount needed depends on how many quasis take the installment payment option versus how many pay off their liabilities in a lump sum, as well as whether pensions are frozen for Tier 1 and Tier 2 employees.

If the universities get out immediately and the other quasis take the installment plan, and all quasis freeze benefits for current employees as the bill pressures them to do, the cost to the retirement system is $827 million, according to the actuary. That’s an added annual cost of $66 million. The proposal does not identify any revenue source that will pay for these costs in future budgets.