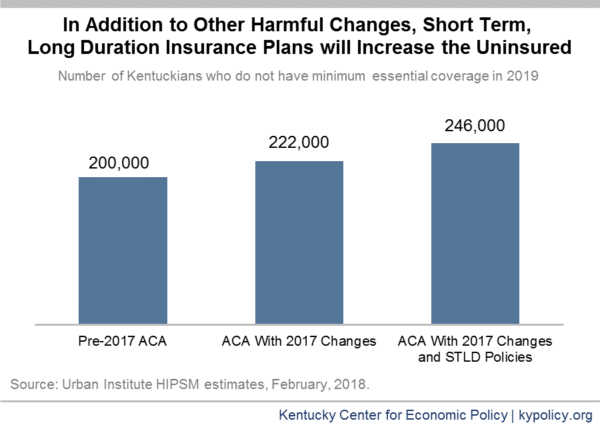 Federal officials recently proposed to allow insurance companies to offer health insurance policies that don’t cover much and can last for just under a year at a time. These Short-Term Long Duration (STLD) plans, in combination with other harmful healthcare changes enacted last year, would be dangerous for those who buy them and for those who buy their insurance on the Affordable Care Act (ACA) exchanges.

Under current law, short-term plans can be used to fill gaps in coverage while people are between jobs or other types of coverage, but only for up to three months. The proposed rule would change that by allowing people to use these plans for up to one day less than a year. In this way, the rule creates a parallel insurance market to the ACA compliant plans.

Unlike almost every other insurance plan, SLTD plans are not subject to the guardrails in place by the ACA. For example, these plans:

Allowing SLTDs would compound other changes made in 2017 that weakened the individual insurance market such as ending cost sharing subsidy payments to insurers, slashing the marketing and outreach budgets for healthcare.gov, and ending the requirement that individuals have insurance or else pay a penalty.

If STLD plans are allowed, healthier people, especially those who don’t receive help to pay for insurance, would likely purchase them because they would have less expensive premiums. This would, in turn, shrink and make less healthy the pool of people insured on the ACA exchanges, increasing premiums by an estimated 18.7 percent. It would also lead to fewer people being insured – primarily those for whom the premium increases on the exchange are cost-prohibitive.

In Kentucky, the Urban Institute estimates that as many as 38,000 Kentuckians would move into an STLD policy. As a result, and in combination with the previous changes described above, the rate of uninsured would increase 23 percent in 2019 when compared to what it would have been under pre-2017 law – when the Affordable Care Act was largely intact.

Some of the predicted increase in the number of uninsured Kentuckians is simply because STLD plans would only cover approximately half of someone’s health care costs, well below the minimum essential coverage, leaving enrollees uninsured according to standards used by the Congressional Budget Office. Nationally, the uninsured would rise by 9 million – 53 percent without any coverage and 47 percent opting for STLD plans.

Allowing STDL plans would create a separate insurance market that competes with the ACA exchanges for healthier people, leaving people who have a medical history with cost-prohibitive premiums. Higher per-person health care costs would also end up increasing public costs. For people below 400 percent of the poverty level ($48,560 for an individual), the tax credit subsidy they receive to offset the cost of premiums would also increase. In turn, the federal government would spend $33.2 billion more in 2019 nationally, $742 million of which would be spent in Kentucky.

For insurance companies, short-term changes in risk pools would make it difficult to predict claims cost. Because of this difficulty, it is likely some insurers would leave the exchanges altogether, opting to focus on other kinds of coverage, instead. As more insurers leave the exchanges, costs will continue to rise – a vicious cycle that will make it harder for Kentuckians to get the medical care and coverage they need.