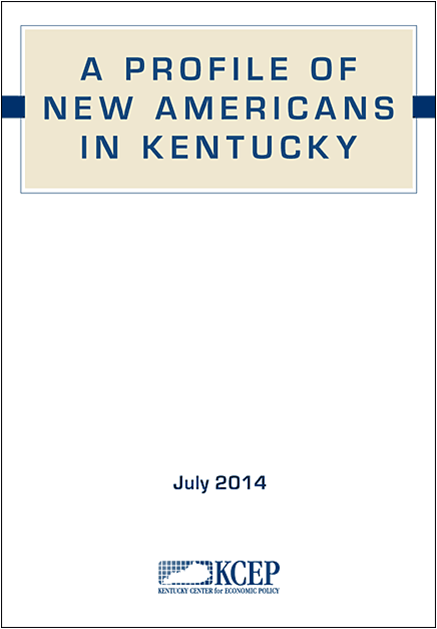 Kentucky’s immigrants are a diverse, rapidly growing population that contributes to the state’s economy at a rate consistent with or even exceeding their share of the state’s overall population, according to a new report by the Kentucky Center for Economic Policy. But in the absence of immigration reform, these Kentuckians face barriers that have implications for the entire state economy.

The report, “A Profile of New Americans in Kentucky,” uses data primarily from the U.S. Census Bureau to paint a picture of immigrants in Kentucky and their role in the workforce and economy. Among the report’s findings are:

“Our public dialogue tends to cast immigrants as a separate, homogenous group but in fact they are people from all walks of life who are already at home in our Kentucky communities, who already contribute significantly to our economy and pay taxes to support the public good,” said Anna Baumann, policy associate at KCEP. “We need to better understand the diversity of Kentucky’s immigrants and the barriers they face in order to create policies that benefit us all.”

Compared to U.S. born Kentuckians, immigrants are overrepresented among those with less than a high school diploma as well as those with a bachelor’s degree or higher. Immigrants are more likely than other Kentuckians to be small business owners—one in 33 Kentuckians are immigrants, but one in 20 small business owners are. However, the overall poverty rate for immigrants is higher than U.S. born Kentuckians. Low-income immigrants are paid less than U.S. born citizens in the same income category as a result of many factors including their overrepresentation in occupations where wage theft is common and in sectors where employers are more likely to pay unauthorized immigrants low wages, including under the table.

“A level playing field between employers who pay illegal wages and those who play by the rules is just one example of how immigration reform would make our economy fairer and stronger,” said Baumann. “When our neighbors are paid fairly and can spend to meet their families’ needs—and when unscrupulous employers can no longer suppress wages and avoid paying taxes by exploiting a particular group–our local economies and communities benefit.”

About one in three Kentucky immigrants are Hispanic, yet the majority of Hispanic Kentuckians (60 percent) were born in the U.S. The top five most common countries of origin are Mexico, Germany, India, Cuba and Japan. More than half of Kentucky’s immigrants speak English very well or speak only English, and there are 116 languages spoken by “Limited English Proficient” public school students in Kentucky.

For more information about immigrants in Kentucky, the full profile is accessible here: “A Profile of New Americans in Kentucky.”