The so-called “Meadows-MacArthur” amendment to the Affordable Care Act repeal bill does nothing to protect Kentuckians from the bill’s harmful changes, but makes things worse by jeopardizing coverage for people with pre-existing conditions. There are 1.8 million people in Kentucky under 65 who have some kind of pre-existing condition, which is 50 percent of the non-elderly population.

The amendment does not repeal what is called “guaranteed issue” (the requirement that insurers offer coverage to everyone, regardless of their medical history), but allows states to waive certain requirements, effectively gutting that guarantee. The bill would allow states to opt-out of ACA requirements such as:

Proponents suggest it would allow insurers to charge less in premiums on average. But insurers would be able to charge lower premiums on average exactly because they would charge prohibitively high premiums for people with pre-existing conditions and offer skimpy plans that don’t cover the kinds of care really needed.

According to CAP, many of the 1.8 million Kentuckians with pre-existing conditions are over 45, but most are younger as shown in the graph below. 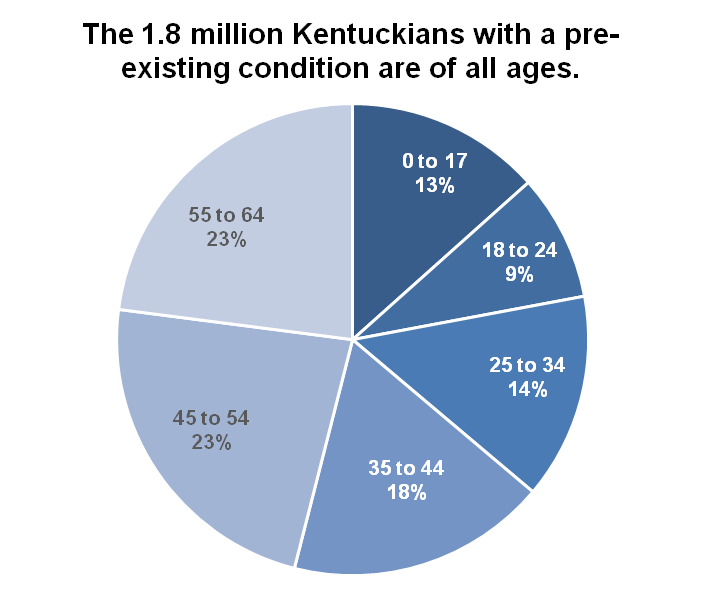 The ACA allowed cancer survivors, pregnant women, diabetics, and many others to get affordable, quality insurance, many for the first time. Since then, we’ve seen dramatic increases in screenings for diseases like diabetes and cancer screenings, more chronic disease management, and greater use of preventive care that keeps some people from developing pre-existing conditions. With this latest iteration of an Obamacare repeal bill, that coverage and subsequent care could be ripped away from even more people.