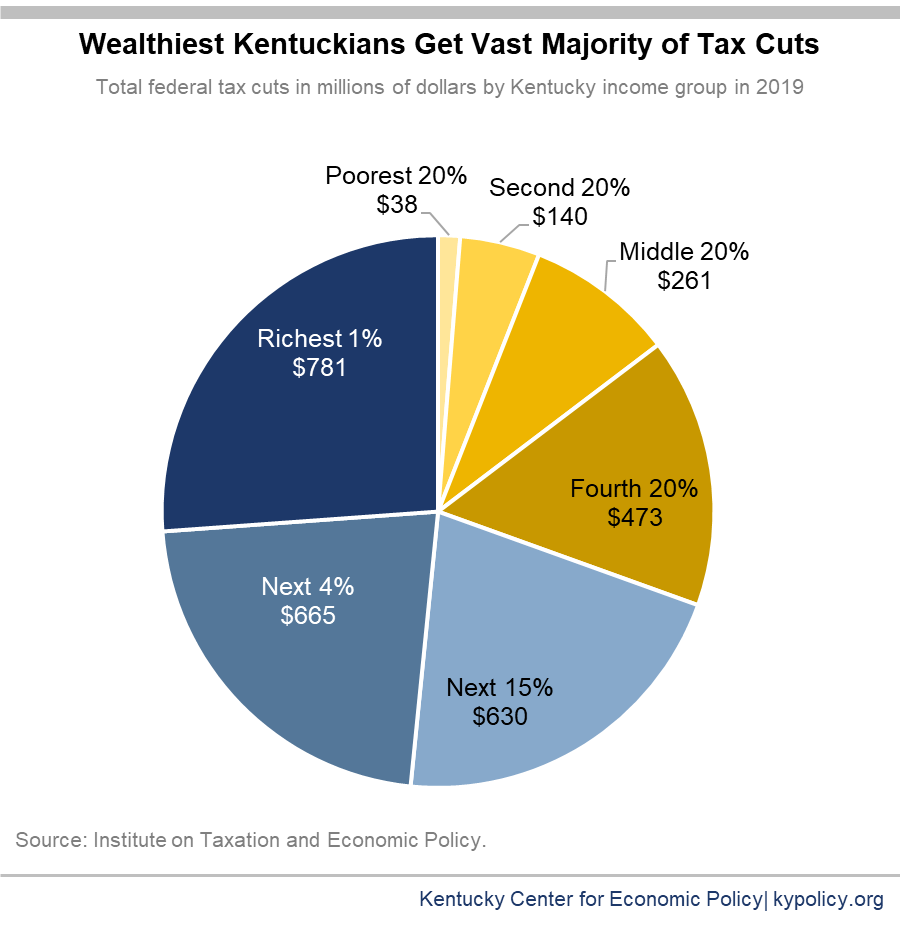 Kentucky is facing a major gap in its next two-year state budget that could mean unprecedented cuts to education and other services. But the General Assembly could look to the money coming from huge new federal tax cuts for the wealthy to help bridge that gap.

The richest 20 percent of Kentuckians are expected to receive $2.1 billion in federal tax cuts in 2019 because of the bill that passed Congress and was signed into law by President Donald Trump in December. Those high-income individuals will receive 69 percent of the total tax cuts in 2019, with $781 million of the cuts going just to the wealthiest 1 percent of Kentuckians — whose incomes already average $1.3 million a year (see graph below).

Kentucky lawmakers could secure at least a portion of this unanticipated windfall to shore up state public investments that benefit all Kentuckians. Diverting just one-fourth of the federal tax cuts for the top 20 percent of income earners would raise $519 million, helping to prevent further damaging budget cuts.

The state could redirect the unexpected dollars through a few different options. For example, we could create a special income tax surcharge that applies above a certain income level for individuals and corporations. Additionally, since legislative action is required to conform Kentucky’s tax code to the recent federal changes (Kentucky is one of the states that does not automatically conform), lawmakers could choose which changes to accept and which to reject. We could incorporate into the state tax code some of the base broadening, revenue-raising measures contained in the new federal law while leaving out those federal changes that would result in lost state tax revenue.

Already, those at the top pay less of their income in state and local taxes than do low- and middle-income Kentuckians. And under the new law, the bottom 60 percent of Kentuckians will see their federal taxes go up over the next decade, while high-income people will continue receiving a tax cut.

We have options that would allow us to better protect vital state services — options that include utilizing some of the huge new federal giveaways that would otherwise benefit the wealthiest among us.