Since the end of March, when Kentucky began making Pandemic Unemployment Compensation (PUC) payments – the $600 per week enhancement to benefits – Kentucky has received at least $1.5 billion through the federally-funded program. This aid has been critical to keeping Kentuckians afloat during COVID-19-related business closures and layoffs, and in reducing further economic harm.

Yet that aid is scheduled to end in in exactly one month, on July 25, despite the continued severe weakness of the economy. The U. S. Senate must agree to extend PUC and preserve its protections for families and the economy. 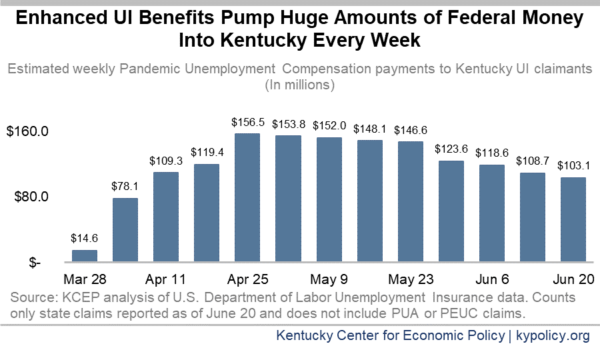 The graph above shows the extra $600 week in Kentucky is a major boost to Kentucky’s economy, but the graph actually underestimates the impact. All Kentuckians who receive either unemployment insurance (UI), Pandemic Unemployment Assistance (PUA, jobless benefits for workers not traditionally covered by UI) or Pandemic Emergency Unemployment Compensation (PEUC, or jobless benefits for those who have exhausted the traditional 26 weeks of benefits) receive the extra $600 PUC payments. Because Kentucky has not consistently reported PUA or PEUC payments, and because the state is still working to process claims to which back payments of PUC will be owed, $1.5 billion is a low estimate.

Having this extra federal funding in Kentucky helps individuals and families make ends meet, and continue to buy the things they need while being out of a job. In fact, during the same time frame when enhanced UI benefits began to be paid out in Kentucky, consumer spending stopped its steep decline, and began to tick up again.

As Kentuckians have resumed making necessary purchases with the help of PUC, those benefits have also preserved other Kentuckians’ jobs by propping up demand for the goods and services they produce. During the Great Recession, UI generated $2 in economic activity for every $1 that was spent through it, ultimately reducing the decline in Gross Domestic Product (GDP) by 18% and preserving as many as 1.8 million jobs nationwide. That “multiplier” would suggest PUC payments in Kentucky may have generated at least $3 billion in economic activity, equal to 1.4% of Kentucky’s total 2019 GDP. According to an estimate from the Economic Policy Institute, extending PUC through July 2021 would boost personal income in the state by $5.8 billion, representing 4% of Kentucky’s GDP and supporting nearly 50,000 jobs.

The CARES Act set an arbitrary expiration date for PUC of July 25, creating a cliff the economy will fall over unless Congress acts to extend it. Yet the employment situation has only slightly improved, and surging COVID-19 cases in some states create a new threat to business reopening. The U. S. House passed the HEROES Act, which would continue expanded benefits for another 6 months. Unless the Senate agrees quickly to extend PUC benefits, Kentucky families will face severe new struggles to make ends meet starting in August and the deep recession will be longer and more painful.