A fund for employees’ health insurance that Kentucky has drained of increasingly large amounts of money in order to balance the state budget is very unlikely to be able to play that same role in the next budget. Limited resources in the fund create more pressure for legislators to find other ways to address a growing budget gap in the coming legislative session.

The Kentucky Employees’ Health Plan provides health coverage to nearly 300,000 public employees and retirees. It is funded through employer contributions and employee premiums.

The plan began to build up balances in its trust fund after claims started falling in 2014 because of changes that shifted more costs to employees. The balance of the trust fund (subtracting amounts set aside for individual employees’ health savings accounts and flexible spending accounts) climbed as high as $726 million in March of 2018 (see graph below).

But because of insufficient tax revenues, the General Assembly began raiding the trust fund, using the monies to shore up the General Fund and balance the budget to prevent even deeper cuts to services. The state has taken about $1 billion from the fund over the last three budget cycles — $157 million in the 2015-2016 biennium, $502 million in 2017-2018 and $310 million in 2019-2020.

These successive transfers have caused the balance of the trust fund to fall, as shown in the graph below. The balance of $407 million in September 2019 will fall further when an additional $175 million transfer from the trust fund happens in June 2020 to shore up this fiscal year’s budget. 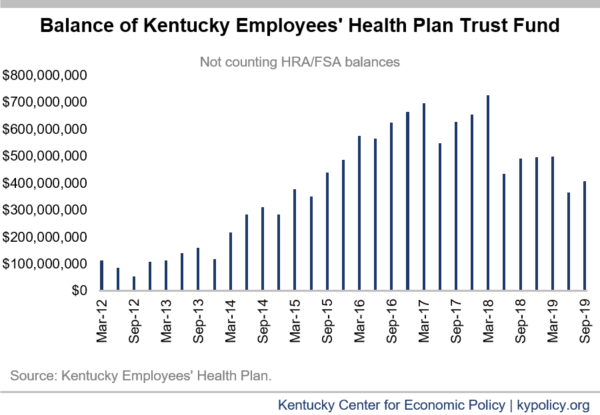 Looking forward, reduced trust fund balances will make it harder to sweep. Furthermore, healthcare claims which the fund pays for have begun creeping back up due in part to inflation for pharmaceuticals and other medical procedures. The board that oversees the plan is now asking for a reserve recommended by its actuaries equal to 10% of claims to better protect against a shortfall in available dollars.

What all of this means is that the time may have run out for using funds built up for employee healthcare to help fill the gap between Kentucky’s tax revenues and budget expenses. The lack of these funds as a resource and the critical funding needs the legislature will face in crafting the next budget — due in large part to recent tax cuts going into effect — are likely to force deep cuts unless new revenue is raised.