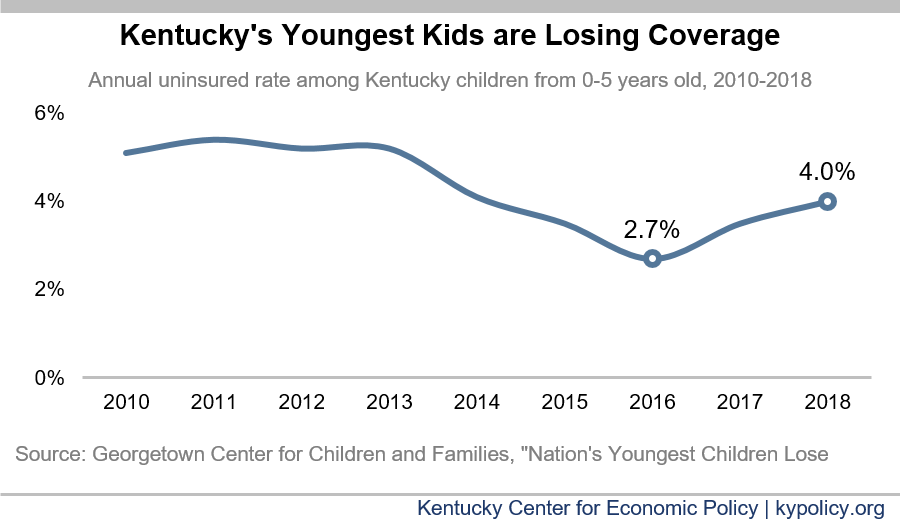 Kentucky is 3rd-worst in the nation in its alarming recent rise in uninsured children below the age of 6. According to an analysis of the most recent census data by the Georgetown Center for Children and Families, the number of uninsured children in Kentucky rose from 8,608 in 2016 to 12,973 in 2018 — meaning 4,365 more young kids don’t have health coverage. The rate of uninsured grew from 2.7% to 4%. 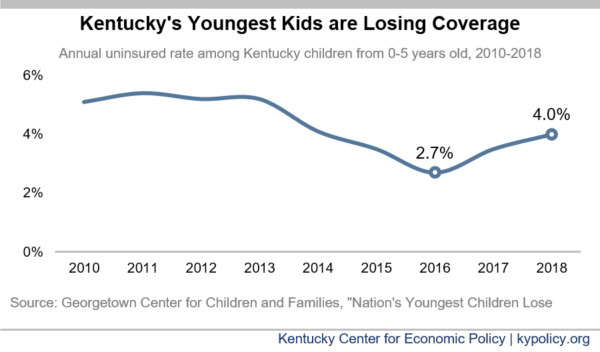 When parents began signing up for insurance through Medicaid and the exchanges after the coverage provisions of the Affordable Care Act went into place, many kids who were already eligible for coverage but uninsured also gained coverage – this phenomenon was known as the “welcome mat” effect. It is not immediately clear if the recent decline in insured children is specific to any one type of coverage. Recent policy choices may have contributed to an “unwelcome mat” effect, when families of children eligible for coverage, particularly Medicaid and KCHIP, do not apply because they are led to believe they’re not eligible or lose coverage because of paperwork requirements. Several recent policy changes may have contributed to this unwelcome mat effect:

Health coverage is important for all of us, but it has outsized benefits for young children, whose early development sets the trajectory for their lifelong well-being. The American Academy of Pediatrics recommends 15 check-ups in the first 2 years of life to immunize children and catch conditions and developmental delays early while they’re more easily treatable and before they cause problems later in life. Medicaid especially has a suite of screenings and treatments known as Early and Periodic Screening, Diagnostic and Treatment (EPSDT), which is associated with a long list of immediate and lasting health benefits.

The children losing coverage will not have access to these and other important health benefits. With a new state administration, Kentucky has the opportunity to ramp up its efforts to get all Kentucky children covered, especially our youngest who are quickly being left behind.