Amid growing attention to harmful overpolicing of Black communities, many are calling on cities to begin shifting public resources away from policing toward social services, mental health, affordable housing and other underfunded services that address social inequities and build safe, healthy communities. As evidence of existing priorities, Kentucky’s 5 largest city governments – home to 58.3% of all Black Kentuckians – spend roughly 25% of their General Fund budgets on police, or $277 per resident on an annual basis. Those same cities spend an average of 4.8% on a variety of social services, or just $52 per resident. 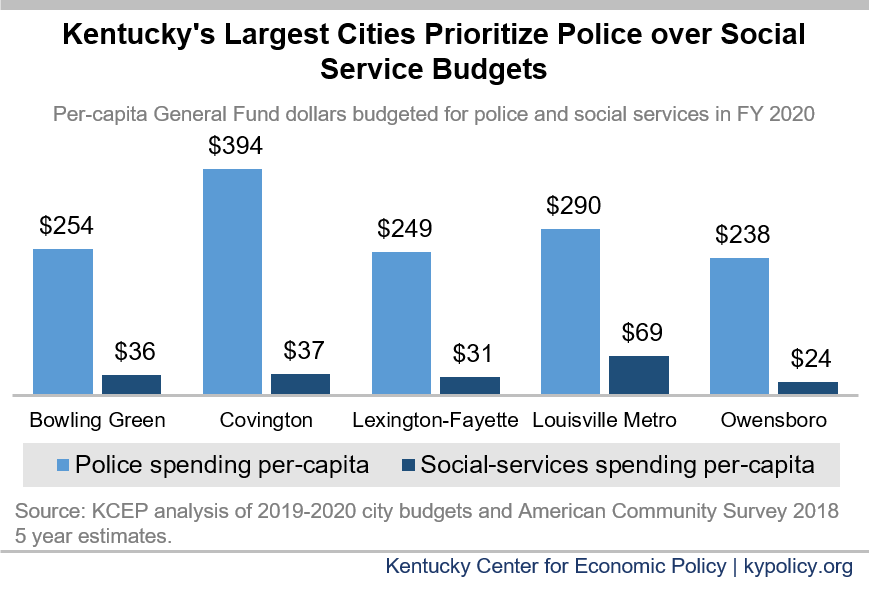 The per-capita spending depicted above only represent what was budgeted from city revenue sources for police, and does not include the monies to operate the local jail or the millions in asset forfeitures, fines and fees, and intergovernmental grants that police departments use to augment their budgets. In total, these 5 cities sustain 2,249 police officers and an additional 638 non-officer, police department employees.

Nor do the data above include a special program run by the U.S. Department of Defense to transfer surplus military property to state and local police departments. Kentucky law enforcement agencies (including the Kentucky State Police) have received $46 million in various military items including clothing, vehicles, computers, night vision equipment, pistols, rifles, gun parts and specialized rifle scopes.

To see what various law enforcement agencies in the commonwealth have received through this program, select Kentucky in the drop-down box below:

By comparison, these cities spend very little on proactive community development and social service programs – investments in youth supports, homelessness, mental and public health and more — which can reduce the need for policing. These include programs like the Office of Resilience and Community Service and the Office of Public Health and Wellness in Louisville; the Department for Social Services or the Division of Family Services in Lexington; and Neighborhood and Community Services in Bowling Green and Covington.

In the absence of robust community investments, police essentially become responsible for challenges they are not actually trained to address. Reallocating funds to upstream solutions would be an important step toward ending police violence and addressing community problems.