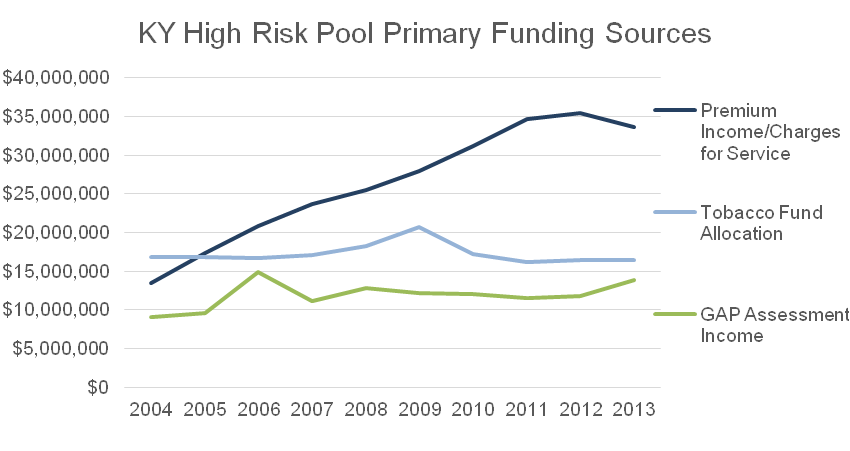 Repeal of the Affordable Care Act (ACA) means going back in time to before the law existed or to some as yet undefined “replacement” plan. Some in favor of repeal suggest a new plan should contain what are called high risk pools, including in the recent “Obamacare Repeal and Replace” policy brief circulated by Republican lawmakers in Washington. But evidence from Kentucky’s former high risk pool called Kentucky Access shows how such ideas fall short of the protections and coverage in the ACA.

What is a High Risk Pool?

Kentucky Access and other high risk pools across the country were created pre-ACA as a way to try assisting some people with serious conditions that made them too expensive to insure. States decided to “pool” people who couldn’t otherwise access coverage into their own insurance group and provide public funds to cover any cost of care above what member premiums paid for.  In theory this made insurance cheaper for healthy people and gave people with preexisting conditions a chance at getting insurance coverage.

How did it work in Kentucky?

Kentucky operated its high risk pool Kentucky Access from 2001 until 2013 when it was no longer needed thanks to provisions in the ACA. Applicants had to meet one of two criteria to participate in Kentucky Access:

This pool was paid for by premiums from members, state tobacco settlement funds and the Guaranteed Acceptance Program (GAP) assessment, which is a fee charged to insurance policies as well as to financial protection products (called stop-loss insurance or reinsurance) purchased by insurance companies. Whereas most other insurance pools’ premiums are enough to cover the cost of its members’ health care, those in high risk pools had conditions so expensive that in order to cover them, revenue beyond premiums was needed.

The original idea was people who would otherwise have been denied coverage could pay premiums with a cost capped at 75 percent above the price of comparable private plans. In 2001, annual premiums for Kentucky Access ranged from $1,798 to $11,056 and were meant to make up a small portion of the cost of the program. What happened over time, however, was the average premium rose 22 percent when adjusted for medical inflation between 2004 and 2013, and comprised over half of the total revenue for Kentucky Access by 2012. 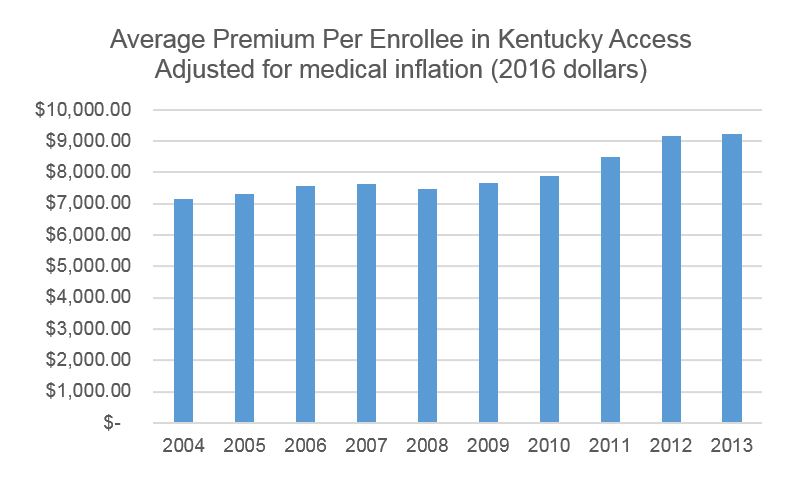 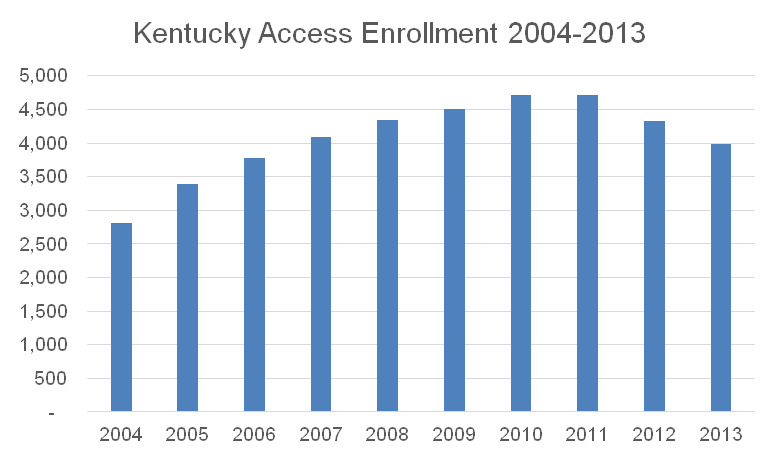 Source: enrollment data from the Cabinet for Health and Family Services.

Coverage was expensive for Kentuckians and covered few people

If the goal was to offer a form of coverage to people who wouldn’t have otherwise been insurable, Kentucky Access worked for a few thousand people. According to the Commonwealth Fund, the coverage it offered was also similar to private plans available to the rest of the public:

However, premiums could cost up to 75 percent more than the average comparable plans, making them out of reach for many low-income Kentuckians. Also, Kentucky’s high risk pool didn’t cover treatment for the conditions that made its members ineligible for private coverage in the first place until they had been enrolled for a full year. This meant that members were on their own dime for treatment to address their preexisting conditions until 12 months after their initial enrollment. Obviously, this was a financial hardship that could contribute to worsened health conditions. Finally, there was a $2 million lifetime cap placed on enrollees. When it comes to expensive, chronic conditions, such caps can leave people right back where they started – uninsured and uninsurable.

Expanding Medicaid to cover more low-income people, offering premium subsidies to others and requiring individuals to have insurance or else face a penalty all eliminated the need for Kentucky Access. Instead, with the ACA, people got insurance coverage to a historic degree, immediately becoming eligible for the treatment of conditions that would have made them uninsurable before.

The ACA also contains a popular provision that requires insurers to offer insurance to everyone, regardless of whether or not he or she has a preexisting condition, known as “guaranteed issue.” One estimate puts the number of Kentuckians with a preexisting condition protected by the guaranteed issue provision at 1.9 million, which far exceeds the 4,700 people covered through Kentucky Access at its peak.

The ACA not only covered more people, but also required insurers to offer free preventative services. This measure is helping prevent ailments from worsening over time, and in some cases preventing them from becoming chronic. This saves money over the long run. So while there was an initial jump in costs for insurers as people started utilizing their coverage for conditions that had not been treated adequately, over time shocks like that won’t be as large.

When the health insurance market relied solely on premiums to pay out benefits, insurers were unwilling to cover people who required costly care. But under the ACA, since everyone is required to get health insurance (particularly young and healthy people) insurance pools can once again balance the costs across enrollees. Further, expanding Medicaid and subsidizing insurance for low-income Kentuckians, many of whom had not been insured for years prior, helps people get and stay healthy, lessening the population’s need for costly care over time.

Some of the proposals to “replace” the Affordable Care Act include high risk pools as one component. However, experience has shown that Kentucky Access was expensive and offered insufficient coverage to very few people compared to how the ACA currently operates. Segregating people who need care the most into inadequate insurance plans is not an acceptable alternative to the many ways Kentucky benefits from the ACA.