Amid lawsuits, health coverage losses and high administrative costs, four of the ten states that have gained federal approval to take Medicaid coverage from people who don’t meet a work reporting requirement have halted their implementation. Two additional states, including Kentucky, have been forced to suspend implementation by court order. Kentucky should join the states that abandon their plans by fully withdrawing its own, which the state estimates would cause about 100,000 people to lose Medicaid coverage and would be especially expensive to implement.

Indiana is the most recent state to stop implementing its plan to take away health coverage through a voluntary suspension citing a pending lawsuit over its plan, which is very similar to Kentucky’s. Arizona voluntarily withdrew its Medicaid plan earlier this month and Maine withdrew its request in January. Arkansas’ and New Hampshire’s plans were struck down by the same judge that shelved Kentucky’s plan twice (New Hampshire had already suspended its policy prior to the court ruling). Citing coverage losses and administrative complexity, health officials in Michigan are also contemplating a suspension of their plan. 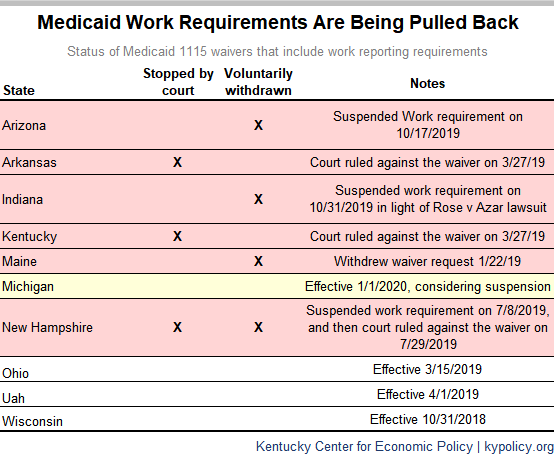 States also face the enormous cost of implementation. A recent GAO report highlighted the administrative cost of implementing a Medicaid work requirement in five states. It found that the Centers for Medicare and Medicaid Services should have done a better job making sure resources were spent appropriately, and should have counted these administrative costs against the requirement for budget neutrality when approving waivers.

Kentucky stood out among the five states both in its inclusion of spending that violated CMS guidance and in the amount it would spend. The $271.6 million Kentucky expected to spend implementing the new barriers to coverage was more than the other four states combined. 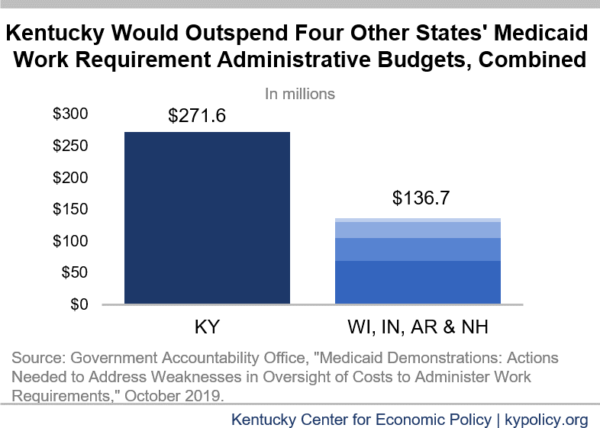 Evidence shows work reporting requirements don’t work to improve employment or wages, and can even drive people deeper into poverty. They have a 20-year track record of taking basic cash and food assistance from people who need help making ends meet, and evidence out of Arkansas shows the same would be true for health assistance through Medicaid. Indiana, Arizona and New Hampshire realized this and withdrew their plans.

With Kentucky’s long-term struggle to improve health and reduce poverty, the best thing for us to do is to follow suit by revoking our own plan to erect barriers to Medicaid coverage. We don’t need another court ruling to tell us that spending more money to cover fewer people will leave us worse off as a state.