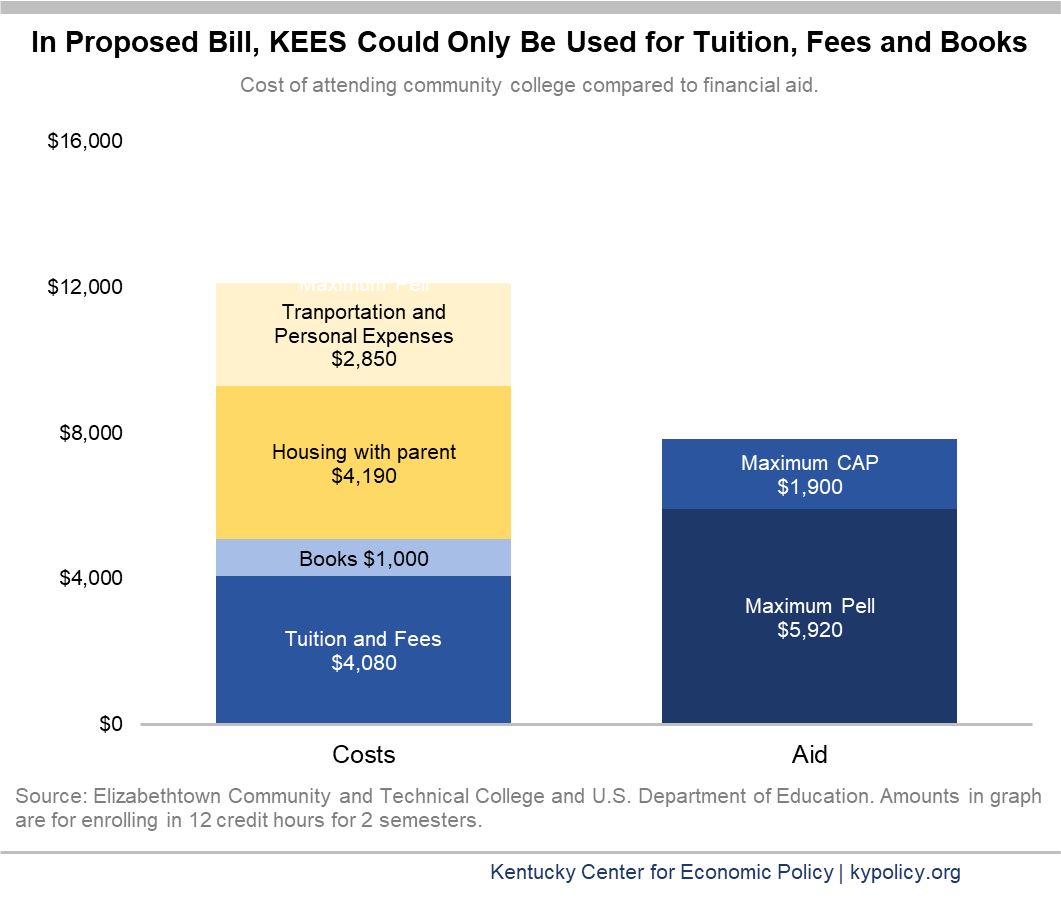 Our state needs to prioritize making college more affordable for low-income Kentuckians and House Bill 247, which would radically alter the Kentucky Educational Excellence Scholarship (KEES), falls short of this goal in several ways.

While KEES — which has historically been a merit-based scholarship program — currently serves primarily higher income students, it also helps some low-income students meet the growing costs of college. HB 247 would reduce its ability to do so.

Currently if a low-income student receives a Pell grant and other need-based state scholarships such as the College Access Program (CAP) and/or the Kentucky Tuition Grant (KTG), he or she can also receive KEES funds (also CAP and KTG funds) beyond the cost of tuition, fees and books; this money helps many low-income Kentucky students afford food, housing and transportation, among other expenses. Such funds are especially important given the growing costs of college in Kentucky due to state budget cuts over the past decade.

Bill Does Expand KEES to More Students and More Classes

HB 247 expands KEES eligibility to students with a GPA below a 2.0 as long as they are successfully moving on to the next grade or graduating. The bill also proposes dual credit courses be eligible for KEES, which is when high school students enroll in college-level classes as early as their sophomore year in order to earn college credit. And the bill makes “qualified workforce training programs” eligible for KEES; the bill specifies that these programs must count toward postsecondary credit hours with a participating institution. Students enrolling in less than six credit hours would also become eligible for KEES as would students convicted of a felony offense. As a result of these changes, more low-income students may be able to earn dual credit and enter into an apprenticeship program or a qualified workforce training program.

However, other changes proposed by the bill would make the scholarship less beneficial for low-income students using their KEES money to enroll in college after high school graduation — for instance, to afford community college, as described below. It’s concerning that the bill’s focus on increasing access to short-term credentials for high school students could undermine college affordability after high school, particularly because in most cases a postsecondary degree — even an associate’s degree — has a much greater return on investment.

Would keep students from using KEES money to help pay for housing, groceries and other necessary expenses for college

HB 247 would change KEES so that it could only be applied to tuition, fees and books — and only after Pell, CAP and/or KTG (KTG can only be used at private colleges, which are typically more expensive) are applied to a student’s higher education bill. This change would make college substantially less affordable for the low-income students who are served by KEES. Currently KEES is designed to help pay for the total cost of attending college including food, housing, transportation and other costs but HB 247 would end this and would mean some low-income students would not be able to use earned KEES scholarships at all.

Kentucky lawmakers need to understand that food and housing are college costs. Research shows many community college students, for instance, are food and housing insecure, which creates major barriers to success in school. Food insecurity is strongly linked to lower graduation rates. And foster youth and students of color are at substantially increased risk, which should be a concern in Kentucky given the growing number of kids in foster care and the state’s lack of progress in addressing higher education achievement gaps.

While certainly students would have to pay for food and housing if they were not attending school, being successful in college requires that students work fewer hours than they would otherwise. So the loss of these work hours is a college cost. And many low-income students are already living in food and housing insecure households before enrolling in college. Already the estimates on the total cost of attendance published for colleges and universities are typically low, and many students work more than one job.

As noted by higher education scholar Sara Goldrick-Rab in a recent New York Times op-ed, “For decades, many students survived on little to afford college. But over time, the situation worsened to the point where now, hunger and homelessness routinely undermine students’ very ability to learn.”

The graph below shows how Pell, particularly combined with CAP, can help cover some college costs, but HB 247 would prevent low-income students with remaining KEES money from being able to use it to cover housing and other expenses. Keep in mind that while many low-income students may live with their parents, they are more likely to need to contribute financially to the household.

HB 247 requires students to fill out the Free Application for Federal Student Aid (FAFSA) in order to be receive KEES, which research shows can be a real barrier for low-income students in qualifying for financial aid. Currently KEES does not have the FAFSA as a requirement. This new requirement particularly hurts low income-students trying to utilize the scholarship for dual credit in advance of college.

Could Result in Less Funding for Need-Based Scholarships

Another important issue is that if these (and other) changes to KEES in the bill — including KEES scholarship amounts receiving inflation adjustments — lead to increased costs for the program, this would likely result in the further underfunding of the state’s need-based scholarships, which have traditionally taken a back seat to the merit-based KEES. By statute, CAP and KTG are to receive 55 percent of lottery funds (after $3 million goes to literacy programs) and KEES is to receive 45 percent of these funds; however, in practice KEES is fully funded and CAP and KTG continue to fall short in their full statutory amount. These scholarships need greater investment, not less, given the importance of need-based financial aid in promoting enrollment and success in college for low-income students. A 2015 bill to allow KEES to be used for dual credit had an estimated cost of $12 million the first year with just seniors eligible and then $23 million the second year with juniors and seniors eligible.

Even if the proposed changes to KEES are cost-neutral, as proponents of the bill suggest (a fiscal analysis of the bill is not currently available), the added costs of new uses for the program would come, in part, at the expense of low-income Kentuckians who would receive less KEES money than before.  While HB 247 enables unused KEES funds to be rolled over to subsequent years — for instance, a student could use remaining funds at a university after earning a two-year degree at a community college — many low-income students end up leaving community college when they are unable to afford the costs. Kentucky can improve on KEES, but it should not do so at the expense of students who need the opportunity that comes with higher education the most.