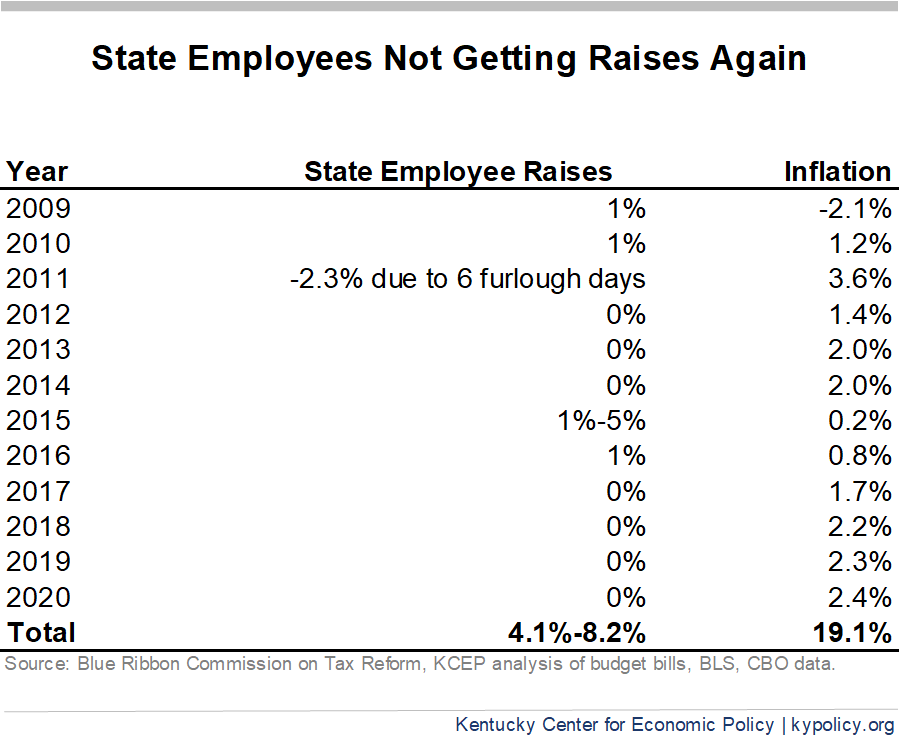 In their budget for 2019-2020, the House is proposing to raise some new revenue — mostly from an increase in the cigarette tax and a tax on opioid prescriptions — and to transfer a large additional amount of monies from the Kentucky Employees’ Health Plan. They use those dollars to prevent some of the cuts to K-12 education and other areas the governor proposed.[1] The House also maintains the boost in funding the governor included for social workers, the criminal justice system and the rainy day fund. The budget does, however, still include big cuts to a number of areas and again includes no across-the-board raises for state employees.

The House budget provides the full funding for active teachers’ health insurance, whereas the governor’s budget made school districts pay a portion of those costs. The budget provides a $5.2 million increase over the biennium for the Safe Schools program.

The House budget also restores the 6.25 percent cut to the state’s public postsecondary institutions included in the governor’s budget. Monies are provided for a number of university-housed programs not funded in the governor’s plan, including the Small Business Development Center, the Mesonet weather monitoring program and the Robinson Scholars program. However, the University Press of Kentucky and the Kentucky Center for Mathematics are not funded. In the Kentucky Higher Education Assistance Authority, the budget provides similar monies as the governor for the primary scholarship programs (known as the Kentucky Education Excellence Scholarship, the College Access Program and the Kentucky Tuition Grant program) but no funding for Early Childhood Development Scholarships, Work Study, the Teacher Scholarship Program and the Coal County College Completion Program.

Other areas that were spared from cuts or given a boost in the House version:

House keeps many of the funding improvements the governor proposed

Like the governor’s budget, the House includes additional monies to hire social workers and provide them raises. The proposed budget also includes monies to lift the moratorium on Kinship Care, the program that supports relatives raising children who are removed from their parents’ custody. Kinship Care enrollment has been frozen since 2013 due to lack of resources.

The House budget keeps and builds slightly upon additional funding proposed by the governor for the criminal justice system. The House would provide the same big increase to the Department of Corrections — an additional $94 million in 2019 and $22 million more in 2020. These increases are primarily to address projected inmate population increases, the cost of operating private prisons and to cover costs that were previously paid for separately as Necessary Government Expenses (NGEs). Additional funds are also provided to the Department of Public Advocacy (DPA), as the governor proposed. The House provides approximately $3 million less each year to the Commonwealth’s and County’s Attorneys than what the governor included.

The House budget is the same as the governor’s when it comes to pension funding. It provides full funding for the Kentucky Retirement System (KRS) plans, which is an increase in dollars contributed from the prior budget due to the KRS board adopting more conservative actuarial assumptions. The budget funds teacher pensions at the level proposed by the Teachers’ Retirement System (TRS).

The House provides $59.5 million from the General Fund in 2019 for the state’s portion of health insurance premiums of retired teachers who have not reached the Medicare eligibility age, which the governor’s budget did not fund. However, in 2020 the House budget requires TRS to make this contribution out of its medical fund. That fund is the result of contributions made by teachers and school districts, and a component of Senate Bill 1 would have teachers pay more into if its funded ratio declines in the future.

Most other areas of government are cut by 6.25 percent in the House budget, just as the governor proposed. The budget provides no funding to the Commission on Women and deeply reduces funding for the Kentucky Arts Council. It cuts $2.5 million in direct aid to local libraries. The House budget cuts in half the $1 million the governor proposed for the Executive Branch Ethics Commission.  It does not include the $100 million in workforce development bonds included in the governor’s budget. The K-12 education programs that are still zeroed out include:

State employees again do not receive raises over the next two-year period in the House budget, just as the governor proposed. As shown in the graph below, that will mean no raises for 8 of the last 10 years.

The House filed a separate revenue bill, HB 366. A fiscal note outlining the new revenue the bill generates is not yet available, though House leaders say it will raise $250 million on full implementation. Some of the increases do not go into full effect during the first year of the biennium. The bill:

Also like the governor, the House increases monies set aside in the rainy day fund, providing $60 million in 2019 and an additional $181 million in 2020. When combined with the estimated ending balance for fiscal year of 2018 of $8 million, that leaves a balance at the end of 2020 of $250 million. This balance is about 2 percent of the state’s General Fund revenues, lower than the statutory target of 5 percent.