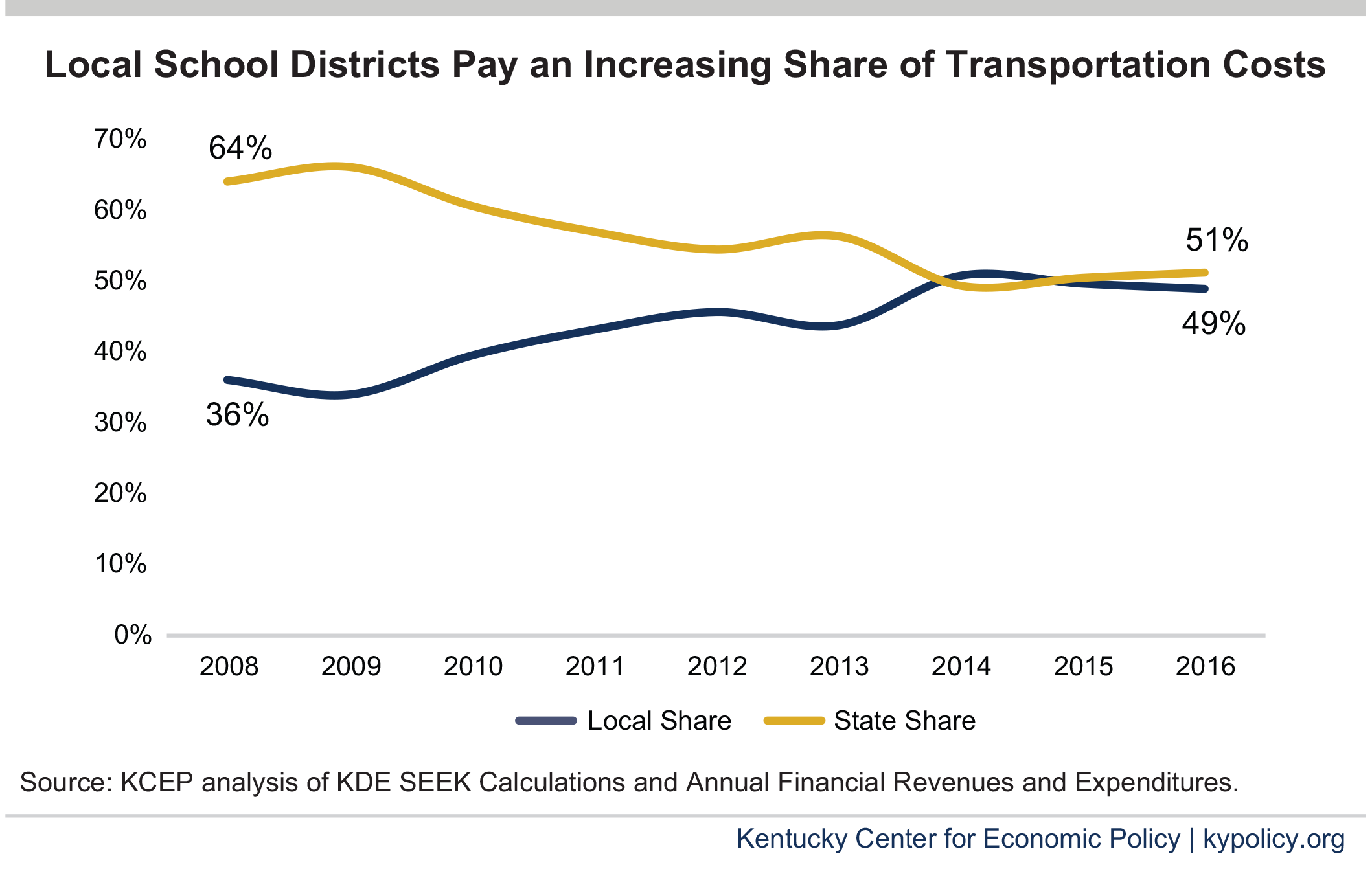 The governor’s proposed budget makes deep cuts to education, eliminates funding for 70 programs and makes cuts to a wide variety of services that have had funding reduced again and again over the last decade. It increases targeted funding for social workers, the criminal justice system and the rainy day fund. The budget does not include expensive level dollar funding for the Teachers’ Retirement System (TRS), which would have required even deeper cuts.

Budget cuts education and eliminates funding for some services

The budget cuts funding for K-12 education by $198 million or 4.8 percent. Especially hard hit is funding for transportation under the SEEK (Support Education Excellence in Kentucky) formula, which is reduced by 62 percent from $226 million in 2018 to $87 million in 2019. This cut comprises $139 million of the overall Department of Education reduction. The state was already shifting the cost of transportation to local school districts, as shown in the graph below – a trend which will be exacerbated by the additional cuts. The real reduction in SEEK funding over time is widening the funding gap between rich and poor school districts, which is now almost at the level it was before passage of the Kentucky Education Reform Act in 1990.1

Higher education is cut overall by $78 million in 2019, or 6.6 percent. Of this amount, $63 million, a 7.2 percent cut, is to direct state funding for public higher education institutions; this makes funding for those institutions 39 percent lower in 2020 than it was in 2008 after adjusting for inflation, as shown in the graph below. 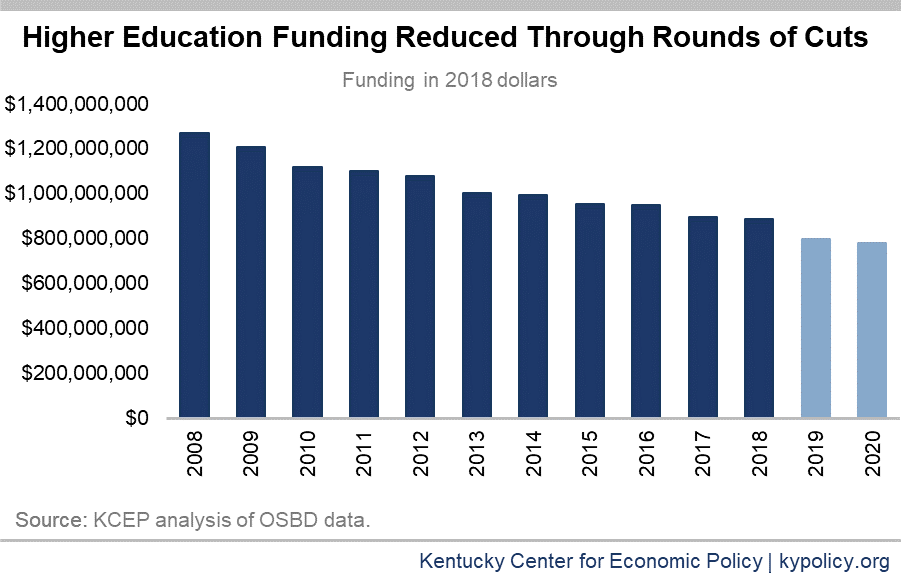 The proposal also provides no funding for the Research Challenge Trust Fund (previously $5.2 million). The budget does increase funding for the need-based financial aid programs known as the College Access Program and Kentucky Tuition Grant program from their levels in the last budget by $11 million in 2019 and $6 million in 2020, though after the increase available funds still only provide about 80 percent of what should be provided under statute.

The budget zeroes out funding for a total of 70 programs as identified in the table below. 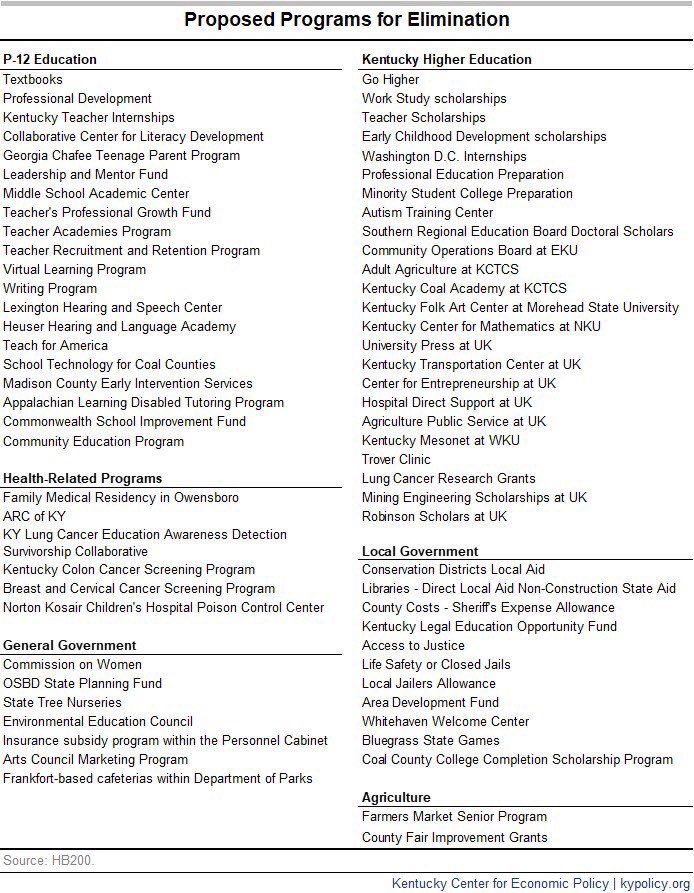 The fact sheet accompanying the governor’s budget reports 6.25 percent across the board cuts to many areas of government. Cumulatively, many agencies already have been cut since 2008 by 15 to 50 percent over 19 rounds of budget cuts.2

The budget also increases funding in some targeted areas. Social workers from the state’s Department for Community Based Services (DCBS) have faced well-publicized challenges with high turnover and unmanageable caseloads. Divided among the Departments of Family and Community Services, Family Services and Aging and Independent Living, there is a $46 million increase across the biennium to hire new social workers. Additionally, the Department of Family and Community Services would receive a $25 million increase to provide badly needed raises for social workers in an effort to increase retention.

The proposed budget also includes an increase of $5 million across the biennium to lift the moratorium on Kinship Care. This program supports relatives raising children who are removed from their parents’ custody, and enrollment has been frozen since 2013 due to lack of resources.

The governor’s budget proposes additional funding for the criminal justice system. A big increase would go to the Department of Corrections — an additional $94 million in 2019 and $22 million more in 2020. These increases are primarily to address projected inmate population increases, the cost of operating private prisons and to cover costs that were previously paid for separately as Necessary Government Expenses (NGEs). It includes more than $4 million over the biennium from the Kentucky Law Enforcement Foundation Program (KLEFP) Fund for the Kentucky State Police to replace aging vehicles.

Additional funds are also provided to the Department of Public Advocacy (DPA) and the Commonwealth’s and County’s Attorneys. The DPA receives a small amount of additional funding in 2018 and additional funds are provided over the biennium, with more than $12 million to support additional costs due to rising caseloads, and $2 million for the Alternative Sentencing Worker Program, which offers an alternative to incarceration for individuals who suffer from substance abuse and/or mental health disorders. Commonwealth’s Attorneys receive an additional $6 million and County’s Attorneys an additional $9 million over the biennium in order to add personnel to address increasing caseloads.

The budget also increases monies set aside in the rainy day fund, providing $62 million in 2019, and an additional $184 million in 2020. When combined with the estimated ending balance for fiscal year of 2018 of $8 million, that leaves a balance at the end of 2020 of $254 million. This balance is 2.3 percent of the General Fund revenue estimate. A large part of the monies for the rainy day fund come from a $150 million fund transfer from the Permanent Pension Fund, which was established in the 2016-18 budget using a transfer of funds from the Kentucky Employees’ Health Plan.

Proposal is less extreme than previously suggested on pension funding

The budget provides full funding for the Kentucky Retirement System (KRS) plans, which is an increase in dollars contributed from the prior budget due to the KRS board adopting more conservative actuarial assumptions. The budget wisely does not provide for “level dollar” funding for TRS, which would have added substantially more costs and is not necessary given the health of the TRS plan.3 If subsequent pension legislation requires level dollar funding for the teachers’ plan and closes the plan to new teachers by moving them to 401k-type plans, it will add around $700 million in new costs to the budget.4 As proposed, the budget funds teacher pensions at the level proposed by the Teachers’ Retirement System. However, the budget eliminates state funding for teacher retiree medical insurance, for which the state contributed $54 million in 2018, and also caps state funding for health insurance for current teachers at a level that is $44 million less than was provided in 2018.

As before, the governor’s budget relies on significant transfers of one-time monies — $472 million over the biennium of which the largest amount of $202 million comes from the Kentucky Employees’ Health Plan. This fund has been raided repeatedly over the past several years to help balance the budget.5 The second largest transfer of $150 million comes from the Permanent Pension Fund mentioned previously. Other large transfers come from the School Facilities Construction Commission Emergency and Targeted Investment Fund at $26 million and the Petroleum Underground Storage Tank Fund at $23 million. The only additional source of revenue for the budget comes from suspending the growing film tax credit program for 2019 and 2020.6