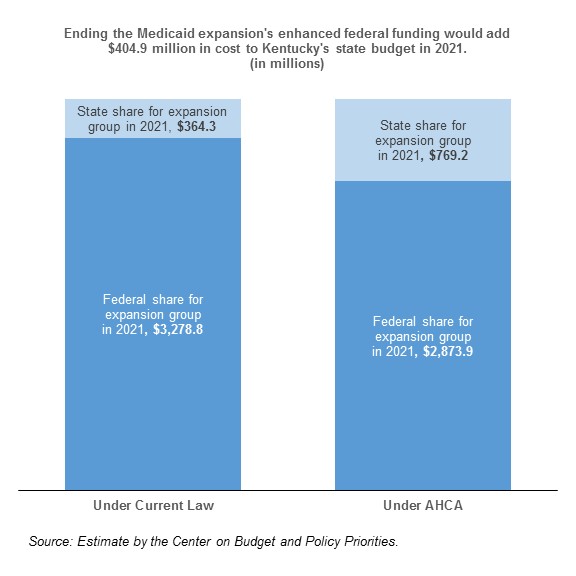 The American Health Care Act (AHCA) ends extra federal funding for states that expanded Medicaid eligibility, meaning Kentucky would have to increase its Medicaid expansion funding 111 percent to make up the difference. This $404.9 million increase in state spending would almost certainly lead to Kentucky ending coverage for the 472,000 Kentuckians insured through the expansion.

How Is Medicaid Paid for In Kentucky?

How Does the AHCA Change That?

The AHCA ends the extra funding for expanded Medicaid, meaning Kentucky would have to pay 30 percent of costs rather than 10 percent of costs for all new Medicaid enrollees starting in 2020. It is this increased responsibility that creates a $404.9 million hole in the state budget the following year.

What Does that Mean for Kentucky’s Budget?

Combined with other dangerous cuts to Medicaid like a per capita cap and those in the proposed Trump budget, a cut of this magnitude would force state lawmakers to cut other parts of the state budget to make up the difference or pull out of Medicaid expansion altogether. States had the option of expanding coverage to people with higher incomes before the Affordable Care Act (ACA), but would not have received the extra federal funding, so Kentucky never did. Given our pre-ACA decision not to expand coverage, our enormous unfunded pension liability and recent attempts to cut back on Medicaid spending through a waiver request, it is unlikely state officials will decide to make up the difference in cost, leaving close to half a million Kentuckians without coverage.