Nearly 1.8 million Kentuckians have a preexisting health condition that, if it were not for specific protections in the Affordable Care Act (ACA), could lead to them being denied coverage, having certain kinds of medical benefits withheld or having their cost-sharing portion increased. Now, with the ACA in jeopardy due to a federal court case, House Bill 21 (HB 21) sponsored by Rep. Patti Minter would ensure that should those federal protections in the ACA be struck down, Kentucky would keep some of the most important protections on the state level.

Half of non-elderly Kentuckians have a preexisting condition

These numbers are concerning overall should ACA protections be lost, but are especially concerning as Kentuckians age. The likelihood of having a pre-existing condition increases with age and 7 in 8 Kentuckians ages 55-64 had one in 2017. 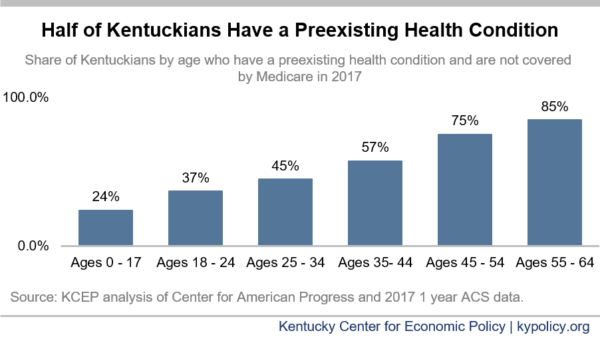 Preexisting conditions include a broad array of illnesses and chronic conditions, but also include past conditions from which people have recovered. They even include the potential of someone to need health coverage in the future – such as being a woman of child-bearing age. Prior to the ACA, people in these groups have been underinsured or uninsured altogether if their only coverage option was purchasing insurance directly from an insurance company, often called “individual insurance.” Besides turning people down for coverage, insurance companies increased premiums above their normal rates, excluded certain kinds of treatment for specific health conditions, increased deductibles or excluded certain benefits altogether (such as prescription drug coverage). Some insurance companies also practiced what is known as “rescission,” which is when coverage was revoked after an individual developed a condition the insurer decided was too expensive to cover – leaving a sick person without coverage when they needed it the most. 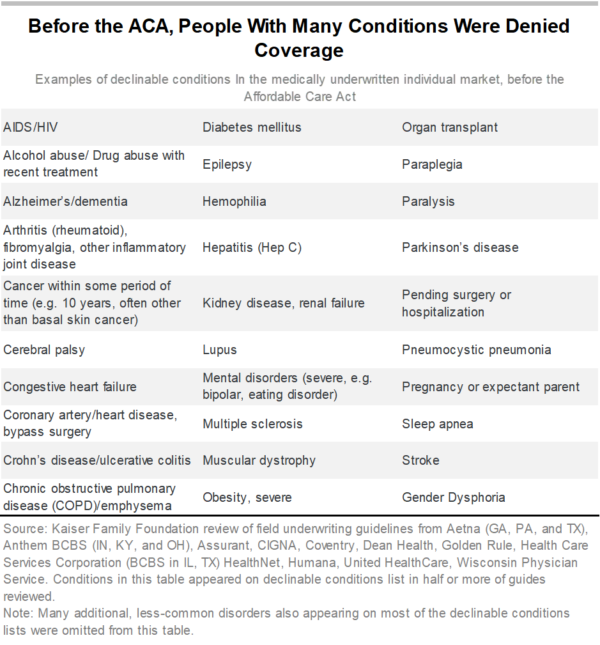 If passed, HB 21 would not change things for Kentuckians right now because the ACA remains federal law unless the Supreme Court decides otherwise. However, if the federal protections are struck down, HB 21 would step in to fill that role. It would prevent insurance companies that provided coverage through small group, large group, association or individual plans (including for public employees) from discriminating against Kentuckians with a preexisting condition in several ways. Kentuckians could not be denied coverage, have their coverage rescinded, face higher premiums or see increased cost sharing (including annual and lifetime caps on medical care spending) due to a current or prior health condition, disability, sex or genetic information.

If the ACA is struck down entirely, there will be a catastrophic loss of coverage as Medicaid expansion and subsidies on the health insurance exchange (as well as the exchange itself) will end, leaving half a million Kentuckians without coverage and tripling our number of uninsured. Passing protections for people with preexisting conditions wouldn’t fix that, but it would ensure that many could continue to be insurable if they could afford private coverage from remaining insurance companies. Since 2018, 13 other states have passed some form of protection for people with preexisting conditions, such as mental health conditions, chronic diseases like diabetes and even potential future parents. Kentucky should join them.