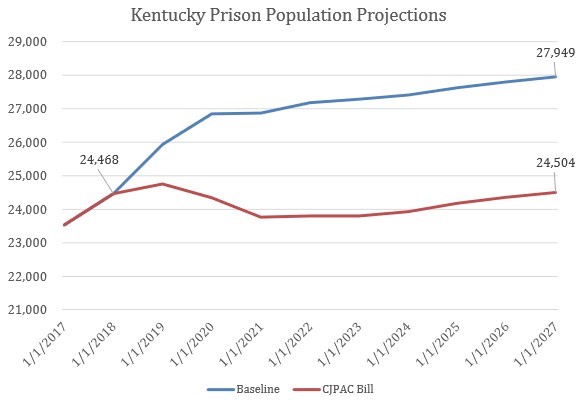 In January, lawmakers headed into the 2018 Kentucky General Assembly with information about and the need to address the state’s rapidly growing inmate population and corrections costs; our status as the state with the second highest female incarceration rate; and the inefficiency and ineffectiveness of investing so much to lock up Kentuckians struggling with addiction. However, the bills passed this session did not improve this critical situation and some even made it worse.

In advance of the session, the state’s CJPAC (Criminal Justice Policy Assessment Council) Justice Reinvestment Work Group released a report based on in-depth analysis of state data. It found that without significant legislative solutions, Kentucky’s inmate population — which has been increasing steadily in recent years — will grow an additional estimated 19 percent over the next decade, with a cost of $600 million.

The report pointed to low level drug-related offenses as being the primary drivers of this growth. For instance, low-level Class D felony drug possession charges alone increased 102 percent in just 5 years between 2012 and 2016. Rather than address the root cause of many of these crimes – addiction – incarceration can do more harm than good as it increases the likelihood of subsequent offenses for many committing low-level crimes. In order to address work group findings, the report laid out 22 recommendations that together would significantly reduce projected incarceration growth and related costs and allow more Kentuckians who become involved with the criminal justice system to receive substance abuse treatment.

Twenty of these policy recommendations were filed in session as House Bill 396 (HB 396). This criminal justice reform package would have reduced the prison population by nearly 3,500 inmates, averting 78 percent of the projected growth in the next 10 years as shown in the graph below. The resulting cost savings were estimated at more than $335 million through 2027. However, the bill was heard for discussion only in committee and never advanced beyond that.

Source: Graph is from a bill summary by the Crime and Justice Institute at Community Resources for Justice.

In addition to criminal justice reform, the state also missed opportunities to increase access to felony expungement and to require racial impact statements for bills — legislation that would help prevent recidivism and make decisions about future criminal justice bills with racial inequities in mind.

Gang Bill Instead Takes Us in Wrong Direction

While good bills did not pass, the “gang bill” HB 169 — which will actually accelerate growth in the state’s inmate population and increase costs by an estimated $19.5 million — did pass the legislature. Research based on the experience of other states passing similar laws shows the bill will not be effective at quelling gang activity or violent crime but will increase racial disparities in Kentucky’s criminal justice system.

The legislature also passed SB 133, which will improve conditions for incarcerated women, particularly those who are pregnant. The bill includes a provision for pregnancy release for some who have a substance use disorder if they enroll in a treatment program and expands jail credits for those incarcerated for misdemeanors, but with other offsetting provisions on net the bill does not address concerns about the state’s growing inmate population.

A number of other criminal justice bills passed this session increase criminal penalties, often in small ways, but that will add to the state’s inmate population even as the state has failed to pass common sense measures stemming growth. For example, bills like HB 22, HB 193 and SB 210 create new crimes or contain other measures that will result in more people in jail.

One bill could have a small positive impact on the problem. HB 207 newly allows jailers, deputy jailers, attorneys and their assistants to use cell phones in jails. The use of cell phones in jails could lead to significant improvements in the representation of defendants.

The 2018-2020 state budget that passed the General Assembly included some important investments in the criminal justice system. However, these investments need to be understood as modest given the continued strain the system will be under, especially given the increased complexity of some cases due to new legislation like the “gang bill.”

The additional funding for the Department of Public Advocacy (DPA) in the budget is helpful but is just the minimum amount necessary to enable the DPA to meet its court-ordered and ethically and constitutionally mandated responsibilities. Current funding levels and a resulting hiring freeze have not been enough for them to meet these obligations, with 518 staff doing the work of a minimum of 552 people. The additional attorneys funded in the budget would simply allow the DPA to hire the staff they need to operate. As seen in the graph below, even with these additional hires, all DPA offices in the state will continue to have caseloads above national standards, which are represented by the black line. 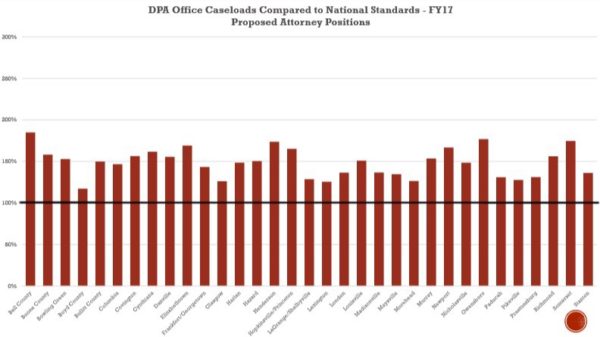 The additional funding for DPA in the budget will also help with a structural deficit moving forward. However, the budget does not address the need for more support staff or the low salaries of DPA attorneys, which leads to very high turnover; a 2015 report found Kentucky’s public defenders are paid 23 percent less than surrounding and comparative states.

The Commonwealth’s and County Attorneys also received only very modest funding increases, not enough to make up for the significant strain caused by past rounds of budget cuts that have had a negative impact on caseloads, salaries and other aspects of the system.

In addition, exempting the state police from cuts is still just “survival level funding,” as described in testimony by the Justice Cabinet. There are currently just 838 troopers when more than a 1,000 are needed for the state police to function at an optimal level.

Omission of Private Prison Funding in Budget Not a Fix

Additional funds for corrections in the budget are due to the projected increase in the inmate population. While the final budget does not include funds specifically for private prisons – a problematic response to overcrowded jails and prisons in its own right – the question about whether the state’s inmate population is outgrowing current capacity is left unresolved. Testimony from the Kentucky Jailer’s Association this session indicated local jails can manage the growth despite continued evidence of jail overcrowding. With the General Assembly’s failure to pass criminal justice reform and the passage of bills that will lead to more incarceration – including the costly, ineffective HB 169 – capacity may continue to be an issue over the biennium. Even if jails are able to house the growing inmate population, the lack of programming and supports for rehabilitation in jails and resulting higher recidivism rates could make a difficult situation worse. True criminal justice reform as was recommended by the Justice Reinvestment Work Group – not making more room in local jails — is what Kentucky ultimately needs.