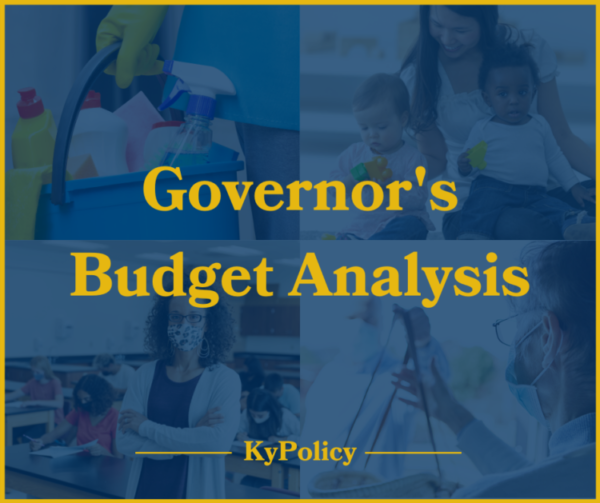 Governor Beshear proposed a budget that uses $613 million in extra revenues created because of federal stimulus to provide targeted relief to families and businesses hurting from the pandemic, protect and in some cases reinvest in vital public services, and make new investments in areas like “last mile” broadband access and school construction. The budget does so while fully funding pension liabilities and increasing the state’s rainy day fund.

The governor’s proposal contains relief measures to respond to the economic pain many are experiencing due to the COVID-19 recession. Importantly, it includes a separate $48 million in immediate aid from the CARES Act to help laid-off people who have been left out and left behind when it comes to unemployment benefits. The plan includes $1,000 payments to those who have waited over 2 months for assistance due to Kentucky’s understaffing and outdated technology, and a $400 payment to people who made too little to qualify for the Lost Wages Assistance Program (a program that provided $400 per week in supplemental unemployment benefits in the fall, but which, under federal rules, excluded people who made less than $100 in regular state unemployment benefits) as well as to people who are currently making less than $176 a week in unemployment benefits. Because this aid is provided with CARES Act money, it will go out now without needing the General Assembly’s approval.

The budget also includes $47.5 million to overhaul Kentucky’s severely outdated unemployment insurance system (a portion of which is from funds previously allocated). The limitations of the current 50-year-old computer system and 20-year-old website are a primary cause of the delays in processing unemployment benefits during this crisis. Another major barrier has been understaffing due to past budget cuts; the proposal includes $1.1 million this year and $8.4 million in the new budget to restore 90 staff to help with unemployment and other services at 12 local career centers.

The proposal includes $220 million for targeted grants to certain small businesses (under 50 employees) of up to $20,000 based on a business’s largest quarterly loss of revenue due to COVID-19, and $20 million to provide $10,000 grants to nonprofits. It includes another $101 million toward the state’s unemployment insurance loan repayment to the federal government on top of $152 million already allocated with CARES Act funds. These monies are to go toward paying interest on the loans in 2021 and then principal, with the suspension of an employer surcharge that would otherwise go into effect for this year. Both the unemployment loan money and the grants to small businesses and nonprofits are in a separate bill with an emergency clause so they are effective immediately.

In the area of K-12 education, the budget increases state funding for the Support Education Excellence in Kentucky (SEEK) formula for K-12 schools by $9 million or 0.3%. State SEEK funding per student coming into this budget was 16% below where it was in 2008 once inflation is taken into account. The budget adds another $103 million for a $1,000 raise for all teachers and classified employees. It includes $11 million for textbooks (funding for which had been zeroed out in recent budgets), $5 million for preschool (which had been cut 6.25% in the 2018 budget and flat-lined last year) and monies for loan forgiveness for teachers. Notably, school districts are also receiving $928 million from the new federal relief bill passed Congress in December.

In the area of postsecondary education, it adds $17 million or a 2% increase in General Fund dollars to state universities and community colleges. Half of those new dollars are allocated according to the state’s performance funding model, while the base is protected from that formula which tends to divert monies from institutions with more low-income students and students of color. Higher education was flat-funded in the last budget, and came into this budget being funded nearly 35% below 2008 levels once inflation is taken into account. The budget includes pension funding help for universities mentioned later in this brief. And there is money for 2,400 new need-based scholarships. The new federal relief bill also provides $261 million for the state’s higher education institutions.

The budget helps address high caseloads in human services by hiring 76 new social workers. More social workers are needed to address the crisis in child welfare exacerbated by the opioid crisis and other factors — Kentucky ranks first in the nation in its rate of abused and neglected children. These conditions have been made worse during COVID-19. Additional social workers had been proposed in the last budget, but were taken out when the legislature passed a continuation budget last spring.

The proposal fully funds Medicaid without cuts to services despite enrollment that will still be 7% higher than it was in 2020 due to the recession. Also included is $1 million for enrollment initiatives related to underrepresented populations. The budget provides funding for 250 more Michelle P. waiver slots and 50 additional slots for the Supports for Community Living waiver program, both of which provide services to individuals with disabilities. Health departments will receive $12 million in additional General Fund monies next year in recognition of their need to build clinical and epidemiologic capacity.

The budget fully funds the actuarially determined employer contribution (ADEC) for the Teachers’ Retirement System, including for the medical insurance portion. For Kentucky Retirement Systems, it provides the full ADEC for state employees. For quasi-governmental organizations, it uses the fixed allocation method proposed by Rep. Jim DuPlessis in House Bill 8 that differentiates contribution levels by agency and removes the incentive for agencies to outsource employment in order to cut pension costs. Importantly, it then provides the full contribution of the ADEC on behalf of health departments and community mental health centers, and 90% on behalf of universities and community colleges (and the contributions automatically decline dramatically for certain agencies like domestic violence centers under the fixed allocation method). This approach both protects these vital agencies from further cuts and puts more money into the underfunded pension systems. In the last two budgets, the contribution on behalf of these agencies equaled only approximately half of the ADEC.

Other aspects of the budget include:

The budget contains several new investments intended to jump-start an economic recovery from COVID-19. It includes $50 million for “last mile” broadband grants that will help localities without high-speed internet access. These grants will allow communities to get broadband directly to businesses and households such as the successful People’s Rural Telephone Cooperative in Jackson and Owsley counties. Grant programs are a key strategy many states are using to expand broadband, as research by Pew Trusts shows.

It includes $100 million for the construction, repair and renovation of schools (in addition to $105 million in offers of assistance to school systems for bonded construction). Kentucky has fewer people employed in construction than it did 20 years ago, and this investment will help generate jobs in that industry in addition to creating safer and more modern schools for the state’s children. The School Facilities Funding Construction Commission has identified over $7 billion in unmet facilities needs, and in a KyPolicy survey, 74% of school systems reported greater facilities needs now than in 2008.

The plan includes an expansion of the Work Ready Scholarship called the “Better Kentucky Promise Scholarship.” It expands eligibility to all new students pursuing associate degrees and certificates with $16 million, allowing it to serve 6,300 more students. The budget includes monies for new water and wastewater systems and flood control that allow the state to draw down federal funds. And it includes $22 million in an emerging industries fund.

The additional spending included in the budget can help families and businesses make ends meet in the remainder of the COVID-19 crisis, and will further stimulate a recovery from the recession by pumping dollars into a weak economy. At the same time, the proposed budget reduces debt and is able to protect reserves moving forward.

The pension contributions in the plan fully fund the actuarially determined employer contribution across all systems for the first time by allowing full contributions to the Kentucky Employees Retirement System non-hazardous plan for quasi-governmental organizations. And although using the rainy day fund is fully justified in a crisis like we are now facing, the budget does not tap the fund because it can rely on the resources created by federal aid to avoid cuts. The budget instead adds $100 million to the state’s rainy day fund, resulting in a rainy day fund of $566 million or 4.7% of the General Fund budget. The budget uses only $78 million in fund transfers compared to $167 million in the current year budget and much larger amounts in prior budgets.

Federal aid in this crisis has made it possible for the governor to propose a budget that does not contain new cuts and allows relief and reinvestment in various areas. The $19.5 billion the state received through the CARES Act and other federal legislation passed in the spring put money into the pockets of individuals and families, kept businesses open, protected public services and allowed new spending to fight the virus. In particular, the $4 billion in stimulus payments and $3.3 billion in an extra $600 per week in unemployment benefits made a big positive difference in sales tax receipts. And since Kentucky has an income tax that applies to unemployment benefits, and many people chose to have their income taxes withheld from their benefit checks, income tax receipts have not fallen like they otherwise would.

In general, the fact that Kentucky has an income tax has played an important role in a brighter revenue picture compared to many other states. It allowed us to continue collecting revenue from wealthier people who have been less likely to be laid off or lose income in this crisis compared to low-wage workers. In contrast, states without income taxes like Tennessee, Texas, Florida, Nevada and New Hampshire have had far deeper revenue troubles than Kentucky.

Importantly, the official revenue forecast upon which the budget is created assumed there would be no additional federal aid package. But in fact, Congress passed another aid package in December that will mean more than $5 billion in additional relief to Kentucky. The outcome of the U. S. Senate race in Georgia makes another aid package on top of that very likely as well. So the forecast will likely prove to be conservative, which would make more resources available.