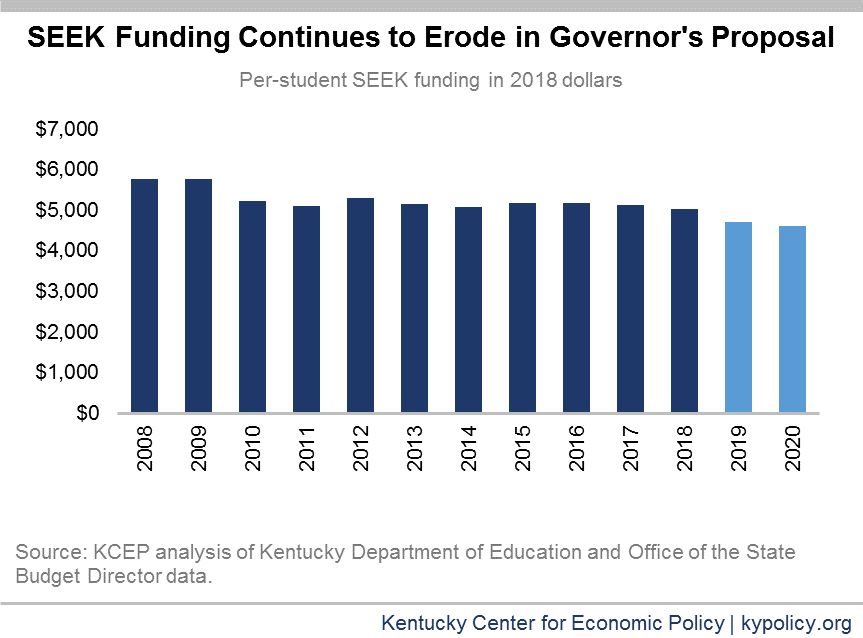 The Support for Education Excellence in Kentucky (SEEK) formula is the primary source of funding for the state’s local school districts. Despite the perception that SEEK funding is not cut in the governor’s budget proposal, a detailed look shows this is not the case.

One part of the SEEK formula is base funding, which comes from a combination of resources raised by the local district as well as state funding. This base funding amount is often referred to as the “per-pupil guarantee” and the level is established for each year in the budget. The governor’s budget proposal sets the level at $3,981 per student in both 2019 and 2020 – the same level as in the current biennium. However, as noted by the Prichard Committee, state funding for the base per-pupil guarantee under SEEK actually declines in 2019 and 2020, compared to 2018; the proposal includes an assumption that increases in local property values will result in more revenues from local districts in order to provide the same per-pupil guarantee.

In addition, the per-pupil guarantee is only one part of SEEK, which also includes additional state-funded components referred to as “SEEK add-ons.” These dollars increase the per-pupil allocation based on specific attributes of each school district. One of the areas funded as a SEEK add-on is student transportation. This portion of the formula has been underfunded for many years, requiring local districts to pick up the slack with local resources, and the governor’s recommended budget cuts transportation funding by an additional $139 million over the biennium.