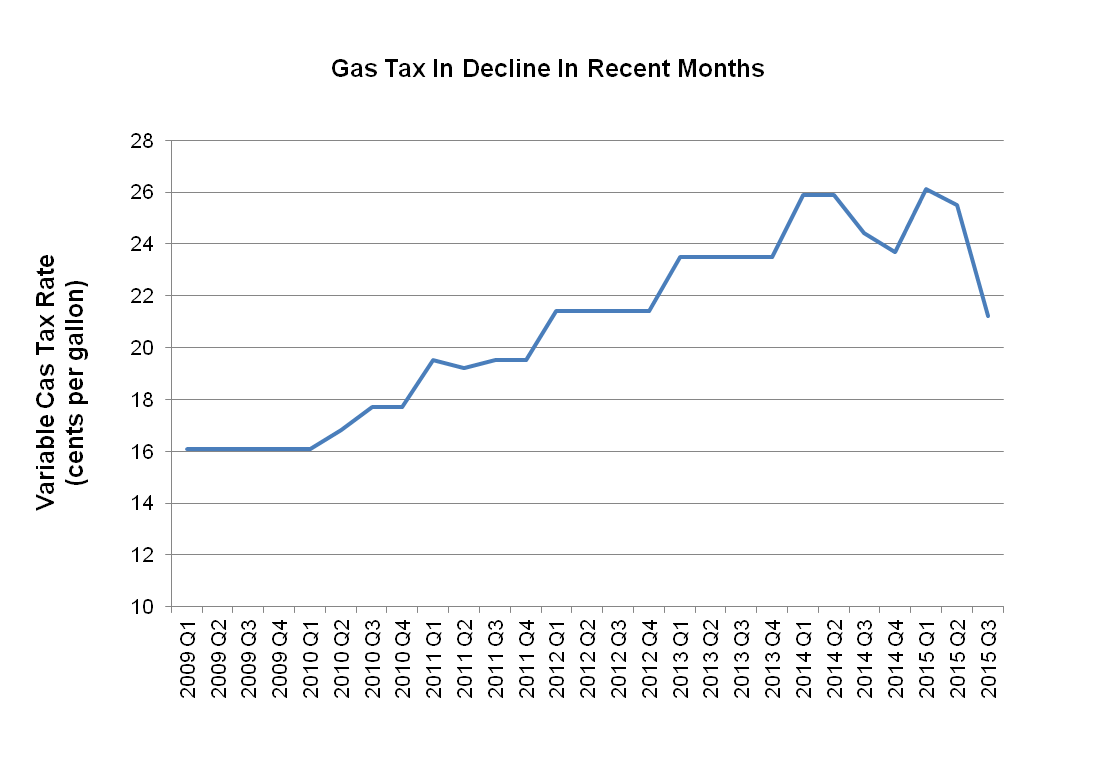 A drop in the price of gasoline means that, come January, Kentuckians will also pay 4.3 cents less per gallon in gas taxes. But while many drivers won’t even notice the tax decrease, the resulting $129 million loss to the state’s Road Fund could jeopardize the safety and efficiency of our transportation system and reduce construction jobs at a time Kentucky desperately needs them.

That’s because the gas tax is Kentucky’s primary source of revenue for the Road Fund, accounting for almost 60 percent of what the state collects to build, maintain and upgrade its roads and bridges. Half of state gas tax revenues are distributed back to local governments through the County Road Aid program (receiving 18.3 percent), the Rural Secondary Aid program (22.2 percent), and the Municipal Road Aid program (7.7 percent).

The estimated $129 million shortfall is 15 percent of the $883 million in gas taxes the state is officially estimated to collect in budget year 2015 and eight percent of the total projected revenue for the Road Fund. As a result, Kentucky’s “rapidly growing backlog” of roads that need resurfacing is likely to grow longer still, with traffic congestion, hazardous road conditions and fewer jobs improving infrastructure as potential consequences.

Kentucky’s gas tax is calculated at nine percent, per gallon, of the average wholesale price of gasoline (AWP). Drivers also pay a “supplemental highway tax” of five cents per gallon and a fee of 1.4 cents per gallon for the cleanup of underground petroleum storage tanks. Every quarter, the Department of Revenue assesses the AWP and adjusts the tax, such that taxes rise and fall with prices. In recent years, Road Fund revenue growth has been strong due to elevated gas prices. However, increased domestic production of crude oil and weak global demand, particularly in Asia and Europe, have made gas prices fall. As a result, Kentucky’s tax will drop from 25.5 to 21.2 cents in January.

In the last five quarters, this will be the fourth such drop. The total revenue decline for the current budget year from decreases—including the one set to go into effect in January—is $147 million. Transportation Cabinet spokesperson Chuck Wolfe explains that the general rule for calculating the impact of these drops is that the state loses $30 million on an annualized basis for each penny that the tax falls. 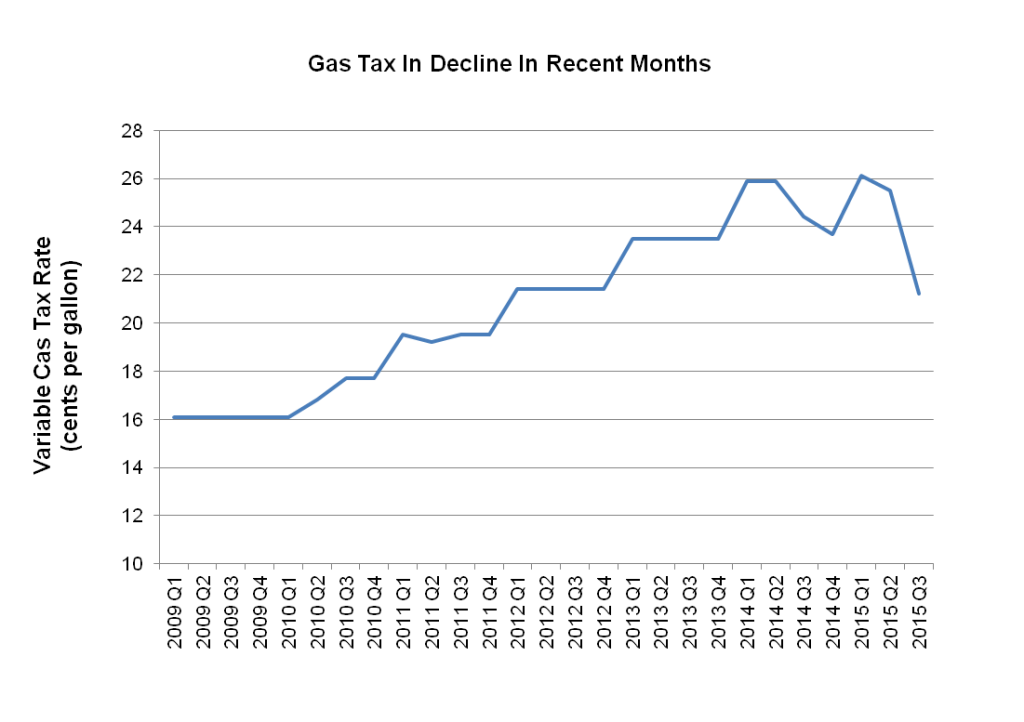 The state does provide some protection from fluctuating prices, but those protections are uneven: gas tax increases are capped at 10 percent but decreases are not capped. The floor for the AWP has not been lifted since 2009 when the price of gasoline was $1.786 and the recession had resulted in a steep drop in gas prices. It’s now far too low to protect the Road Fund from the pending 17 percent decline in the gas tax. And when gas prices do rise, the ceiling will limit revenue recovery, likely meaning more cuts to infrastructure projects in the future.

Governor Beshear’s 2012 Blue Ribbon Commission on Tax Reform proposed that the state safeguard the Road Fund by raising the floor to what was then the current AWP of $2.616 per gallon. And in his 2014-2016 executive budget, Beshear recommended freezing the AWP at $2.878, which would have raised the gas tax by 1.5 cents to 25.9 cents per gallon—its rate at the end of 2013—and allowed $107 million in Road Fund projects to move forward. The 2014 House-passed revenue bill that accompanied the budget took up that proposal, but the 2014 General Assembly ended with no action to raise the floor and protect against cuts.

To make things worse, the prior General Assembly in 2013 exacerbated Road Fund challenges by passing a bill with a $34 million Road Fund tax cut: as a part of the pension reform package, the legislature provided a trade-in credit against the motor vehicle license tax based on the value of a used car when purchasing a new car.

The money Kentucky has to build and maintain its roads and bridges is also hurt by Congressional inaction on the federal gas tax which has been frozen at 18.4 cents per gallon since 1993. States receive federal Road Fund dollars for infrastructure work, and the Institute on Taxation and Economic Policy estimates that gas tax erosion has cost the nation $215 billion over the last twenty years. To prevent event deeper cuts to infrastructure investments, the federal government has patched its transportation spending with general revenues which could have gone to other needed programs.

Kentucky lawmakers can take action on the state’s Road Fund by fixing the gas tax. To prevent the current pending $129 million loss, they could freeze the AWP floor at its current level of 25.5 cents per gallon (based on the July 2014 AWP survey). And to avert such deep drops in the future, the legislature should provide the same protection from a 10 percent price decrease that is provided for a 10 percent increase.

Guaranteeing we have what it takes to build and maintain a safe and efficient transportation system in the long-term will require a broader strategy that reflects inflation in construction costs. Strategies to sustain revenue for infrastructure involve indexing the gas tax to something other than gas prices or looking at other revenue sources entirely.

One way to strengthen the relationship between gas taxes and the rising cost of road construction (including asphalt, machinery, labor and other expenses) is to link the gas tax to a measure of inflation. In Florida, Maryland and Massachusetts, for example, gas taxes grow with the Consumer Price Index.

But even with protections against inflation, as fuel efficiency standards continue to increase and more people buy cars that use less gas including electric and hybrid vehicles, gas consumption and tax revenue will erode. In fact, taxable gallons of gas have declined an average of 1.3 percent per year over the past ten years. In recent years, elevated AWPs have offset this trend and kept revenue growth strong. With lower prices—which analysts forecast will continue at least through 2015–the Road Fund will feel the effect of declining consumption.

One strategy that some states have experimented with—including Oregon, Florida, Illinois, Idaho, Kansas, North Carolina and Texas—is to add a pay-per-mile or ”vehicle-miles-traveled” (VMT) tax to their Road Fund portfolios. The VMT allows drivers to contribute to transportation system costs in proportion to their actual usage, whether their vehicles run on gas, less gas, or alternative fuels. Two caveats: gas taxes are an important avenue through which drivers with less fuel efficient cars help pay for the environmental side-effects of gas consumption. VMT’s should complement rather than replace gas taxes for this reason. Also, like gas taxes, VMT’s must be indexed in some way to rising construction costs if they are to provide a sustainable source of revenue.

Future legislation on the gas tax could also consider its regressive nature, costing low-income residents a higher share of their income than the wealthy. Kentucky could address this problem by providing a refundable credit, tied to inflation, against state income taxes for those below a certain income threshold.

Kentuckians need safe and efficient roads and bridges to travel to work and school, and our businesses need a reliable system for the transport of goods. Problems with Road Fund revenues need addressing or we will continue to experience revenue shortfalls that hurt investments in needed infrastructure.