Kentucky collected $372 million more in FY 2016 than in FY 2015. And while this increase shows Kentucky’s economy is growing – with people earning and spending more, thus paying more income and sales taxes, for example – it is the norm for our economy, and therefore revenue, to grow.

After the Great Recession, revenue dropped two times in FYs 09 and 10, but in the 6 years since, has grown every year — 3 times at a rate higher than in FY 16. Over the last 20 years, revenue has declined only 3 times, and has grown at a higher rate than in FY 16 8 times.

Whether revenue is growing enough is a different matter (one we can say more about in August when the state publishes quarterly economic data). For a long time in Kentucky, revenue growth has not been keeping up with economic growth, meaning our ability to sustain a certain level of crucial investments is eroding. And given Kentucky’s large pension liabilities and pressure to reinvest in education, human services and other areas, the gap between what we are generating and what we need is substantial.

It will be another month before state officials reconcile expenditures with revenue and announce if there was a surplus in FY 16. This process will account for necessary governmental expenses – unbudgeted expenditures such as natural disasters like the recent flooding in western Kentucky – as well as how much was actually spent by various agencies of state government compared to what was budgeted. Governor Bevin announced cuts of 4.5 percent for many parts of state government in FY 2016 and 2 percent for higher education.

Relative to the original forecast on which the 2016 budget was built, revenue collections were $292 million higher than expected (or 2.9 percent). Part of that difference can be attributed to improvement in our economy since January  2014 when the forecast was created, and some is due to the difficulty of predicting receipts two years out.

Compared to the official revised forecast from January of this year, revenue was just $49 million higher (0.5 percent) – a small difference in the context of a $10.3 billion General Fund.

Experts have predicted that if Kentucky does not address the holes in our tax code – especially the billions in tax breaks inserted into our tax laws by powerful interests – we face a structural deficit that could grow to $1 billion by 2020. That means a growing challenge in finding the money we need to invest in public schools, affordable colleges and universities, health and human services, and other services essential for thriving communities. The most recent two-year budget reflects this growing crisis, which pitted our pension liabilities against higher education, services for vulnerable Kentuckians and many other areas that received their 16th round of budget cuts since 2008.

Sales and use tax growth outpaced individual income tax growth (IIT) by 0.8 percentage points in 2016 compared to 2015. But looking back over the years since the recession, the IIT has grown 41 percent or $1.2 billion while the sales tax has grown 23 percent or $645 million. Over the long term, income taxes grow more than sales taxes do. 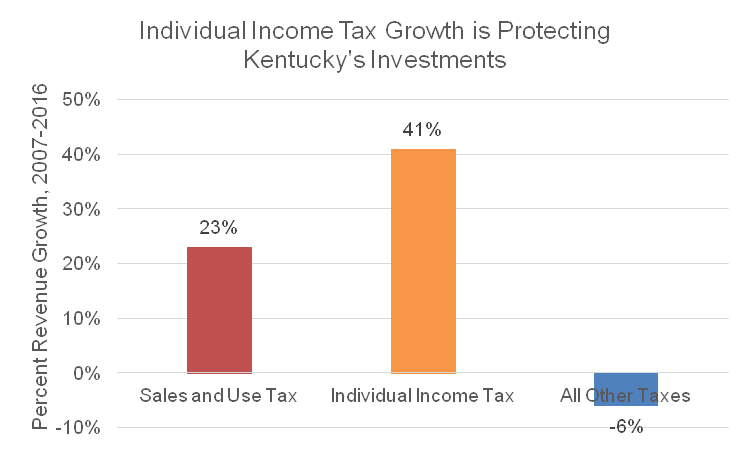 The kind of tax reform Kentucky needs strengthens both income and sales taxes and resists jumping onto the income-tax cutting bandwagon that has been popular (and devastating) in other states. Cutting income taxes would weaken the strongest source of revenue growth we have to invest. The idea that shifting to a more sales-tax reliant system would make up for these losses is misguided: not only does it increase income inequality by asking even less of those at the top and more of everyone else, but it also ignores the problem that, in the context of growing income inequality, sales tax-reliant states struggle to generate enough revenue. That’s because a shrinking middle class means weakening demand for the purchases that generate sales taxes.

Despite action in the 2015 session of the General Assembly to raise the gas tax floor and adjust the rate setting process going forward, Kentucky roads and bridges – and therefore our motorists and economy – were not sufficiently protected from falling gas prices over recent years. With the tax based on the wholesale price of gasoline, declining global oil prices have impacted Kentucky revenue. Even though the Road Fund’s second biggest source of revenue, the motor vehicle usage tax, grew by 11.9 percent or $52 million in 2016, the entire fund shrank by 2.9 percent or $44 million to $1.5 billion. The gas tax itself shrank $100 million in FY 2016.