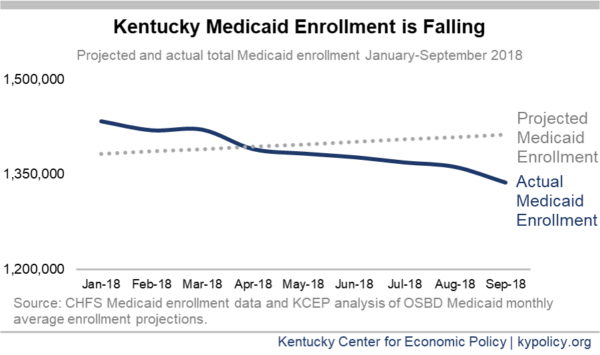 Recent claims of a “shortfall” in the budget for Medicaid benefits – an unwarranted alarm based on a misrepresentation of budget numbers – are further undercut by the fact that Medicaid enrollment is falling. Between January and September of 2018, total Medicaid enrollment fell by 96,634 people, or 6.7 percent.

Not only has enrollment been steadily dropping over the past eight months, but enrollment is below what the state had projected and used in its cost estimates. In the budget, the state thought Medicaid enrollment would average 1,427,045 in fiscal year (FY) 2019. As of September, there were 1,336,455 people enrolled in Medicaid – approximately 90,600 or 6.3 percent fewer than expected for an average month in FY 2019.

At a budget review committee meeting in August, the state argued that in addition to expected enrollment growth, projections of claims costs developed during the last budget cycle led them to believe that Medicaid benefit appropriations were not enough to cover their bills for the fiscal years 2019 and 2020. But looking at the recent past, per-person Medicaid benefits costs have actually decreased every year since 2015. No analysis has been shared to demonstrate whether costs claims are expected to rise or fall in the next two fiscal years. 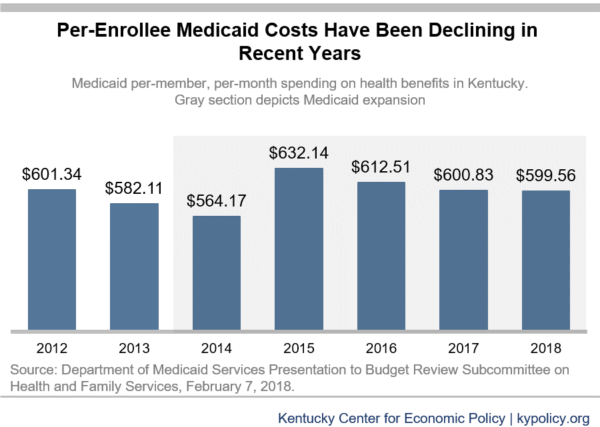 Using estimates for the growth of claim costs and enrollment is good budgeting practice. It was reasonable to expect at the end of 2017 that enrollment would continue rising as it had been prior to January 2018; indeed, enrollment was above previous projections at the time. But recent enrollment and benefit cost trends run counter to a narrative saying the Medicaid program faces a meaningful shortfall.