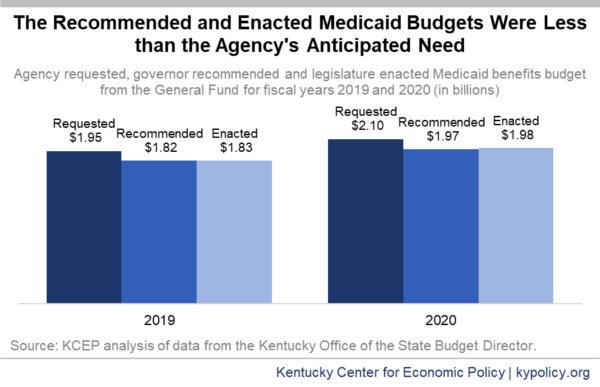 Recent testimony by Cabinet for Health and Family Services (CHFS) officials about a Medicaid “shortfall” over the next two fiscal years (just 1.3 percent of the total budget) left out important details, including that it was largely created by the executive branch in their January budget proposal to the legislature, causing unnecessary alarm.

More than 80 percent of the shortfall – $254.7 million of $311.2 million – would not exist had the governor’s recommended budget and ultimately the enacted budget simply reflected the official agency Medicaid request, as shown in the graph below. If Medicaid was funded according to agency projections, that would have also leveraged substantial additional federal dollars that may have closed any remaining shortfall.

Although every state agency requests a certain budget amount based on their anticipated need, the governor’s recommended budget proposal is the official starting point that the General Assembly uses to enact a final budget. It has been common for the governor’s proposed budget, and the following enacted budgets, to provide less than Kentucky’s Medicaid agency requested. But none of the recent cases have resulted in substantial cuts in benefits and spending has ended up at or below enacted amounts. Medicaid expenditures are ultimately hard to predict because they depend on conditions in the economy and health service utilization not precisely known 1-2 years ahead of time, which is when the state budget is created.

In addition to failing to explain the context for the “shortfall,” CHFS testimony overstated its extent by ignoring additional resources that were appropriated in the budget to deal with some costs. The spreadsheet detailing the deficit includes costs related to the reimbursement increase for the dispensing of medications to Medicaid enrollees, an increase in the provider rate for the Supports for Community Living (SCL) waivers and the extra Traumatic Brain Injury waiver slots without also showing that $91.1 million in funds were enacted to offset those costs. Had the General Assembly appropriated what the agency requested, and had CHFS reported the extra funding for the programs mentioned above, the total shortfall presented last week would have been non-existent.

Yet even at $311 million, the “shortfall” constitutes a very small portion of overall Medicaid benefits funding, and is known well in advance of the end of the budget period. Especially only two months into the first year of a two-year budget, it does not warrant drastic action to correct. 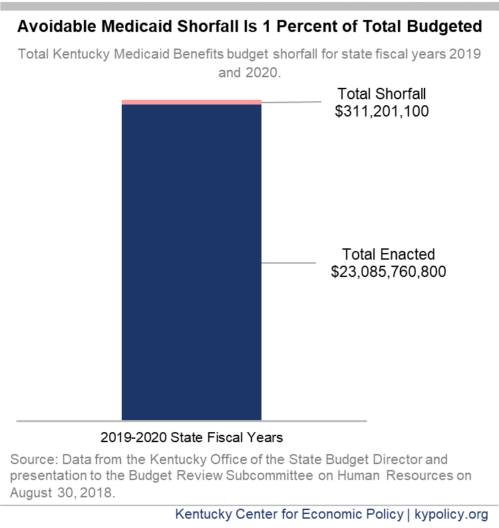 Using this claim as an excuse to cut Medicaid through barriers to coverage in Kentucky’s 1115 waiver request, ending vital benefits such as vision, dental and prescription drugs, or potentially ending the Medicaid expansion wholesale – as the administration has threatened to do – is reckless and would have devastating long-term costs. Taking away Kentuckians’ health care because of the way Medicaid was budgeted and information reported to the General Assembly is wrongheaded and will harm many of the 1.4 million Kentuckians covered by Medicaid.