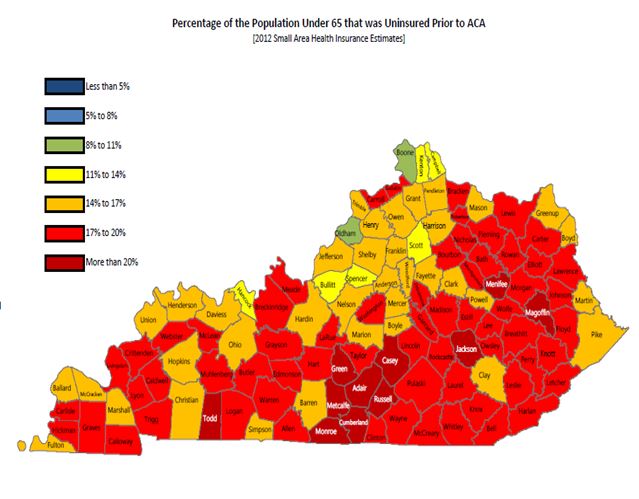 Kentucky is starting to see the benefits of its decision to expand Medicaid through the Affordable Care Act (ACA) in dramatic reductions in the number of uninsured across Kentucky counties and increased use of preventive care services, according to a recent presentation to the Interim Joint Committee on Health and Welfare by Kentucky Medicaid Commissioner Lawrence Kissner.

As seen in the maps below, the ACA has substantially increased the share of Kentuckians with insurance all across the state. In 2012, 75 Kentucky counties had uninsurance rates of at least 17 percent—with 11 of these counties greater than 20 percent. Now, according to Commissioner Kissner, there are potentially no counties with uninsurance rates above 17 percent—and just two counties that fall into the category of 14 to 17 percent of the population being uninsured. The maps indicate that in several southeast Kentucky counties where more than 17 percent of the population was previously uninsured, the uninsured rate may have fallen to less than 5 percent. 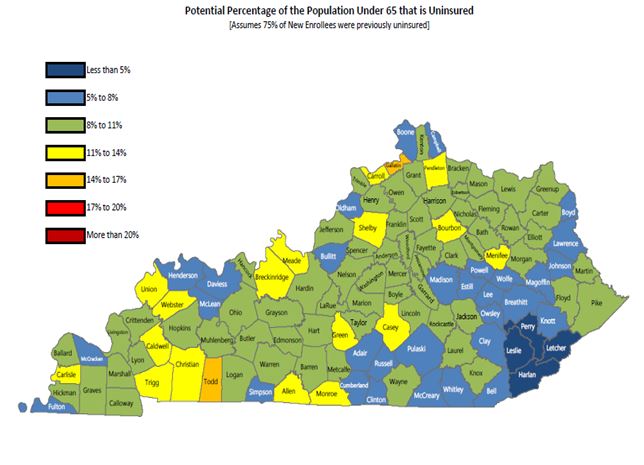 Commissioner Kissner’s presentation also helps make clear how important Medicaid is as an often temporary safety net for individuals and families in Kentucky struggling to make ends meet. His presentation notes that the state’s Medicaid program experiences a lot of “churn”—there is a consistent influx of new members but a roughly equivalent number who leave the program each year. For instance, only 81 percent of the individuals enrolled in Medicaid in Kentucky in June of 2012 were still enrolled in June of 2013. 151,424 persons had left the program and had been replaced by 153,822 new individuals. Going back to June 2011, only 70 percent of members were enrolled in Medicaid all three years. With Medicaid expansion, more Kentuckians will have the financial and health security that Medicaid provides when they fall on hard economic times, and as they struggle to get back on their feet.