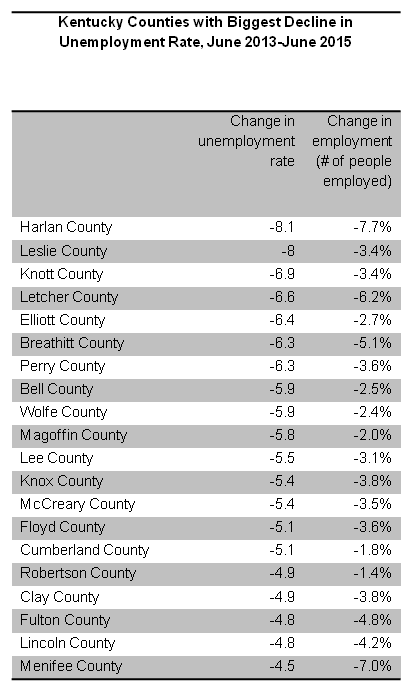 Kentucky is celebrating its drop in unemployment rate, which at 5.2 percent as of July is hovering at a level not seen since 2004.

But since the unemployment rate doesn’t count as unemployed those who aren’t currently seeking work, it overstates how good things are. This problem can be seen by looking at Kentucky’s coal counties, which have had among the state’s biggest declines in unemployment rates the last two years, even while facing a major economic crisis in the loss of coal jobs.

As seen in the table below, the 17 counties with the biggest decline in unemployment rate in the two years prior to June 2015 (the latest month available at the local level) are all in eastern Kentucky. The biggest drop was in Harlan County, which saw its unemployment rate drop from 19.2 percent to 11.1 percent, for an 8.1 percentage point drop.

But as the second column in the table shows, every one of those counties has fewer people employed than two years ago. Counties like Harlan and Letcher have seen among the biggest percentage decline in the number of people with jobs across Kentucky counties.

The reason is obvious: a big loss in coal jobs with few other local employment options for dislocated coal miners to move into.

Kentucky should be glad of the economic progress it has made in certain regions and sectors and continue to build on those successes. But we should temper that with a serious conversation about doing much more to create more jobs in rural areas, especially coal counties. Support for the Power+ Plan, which is gaining the endorsement of local governments in eastern Kentucky, is a great place to start.