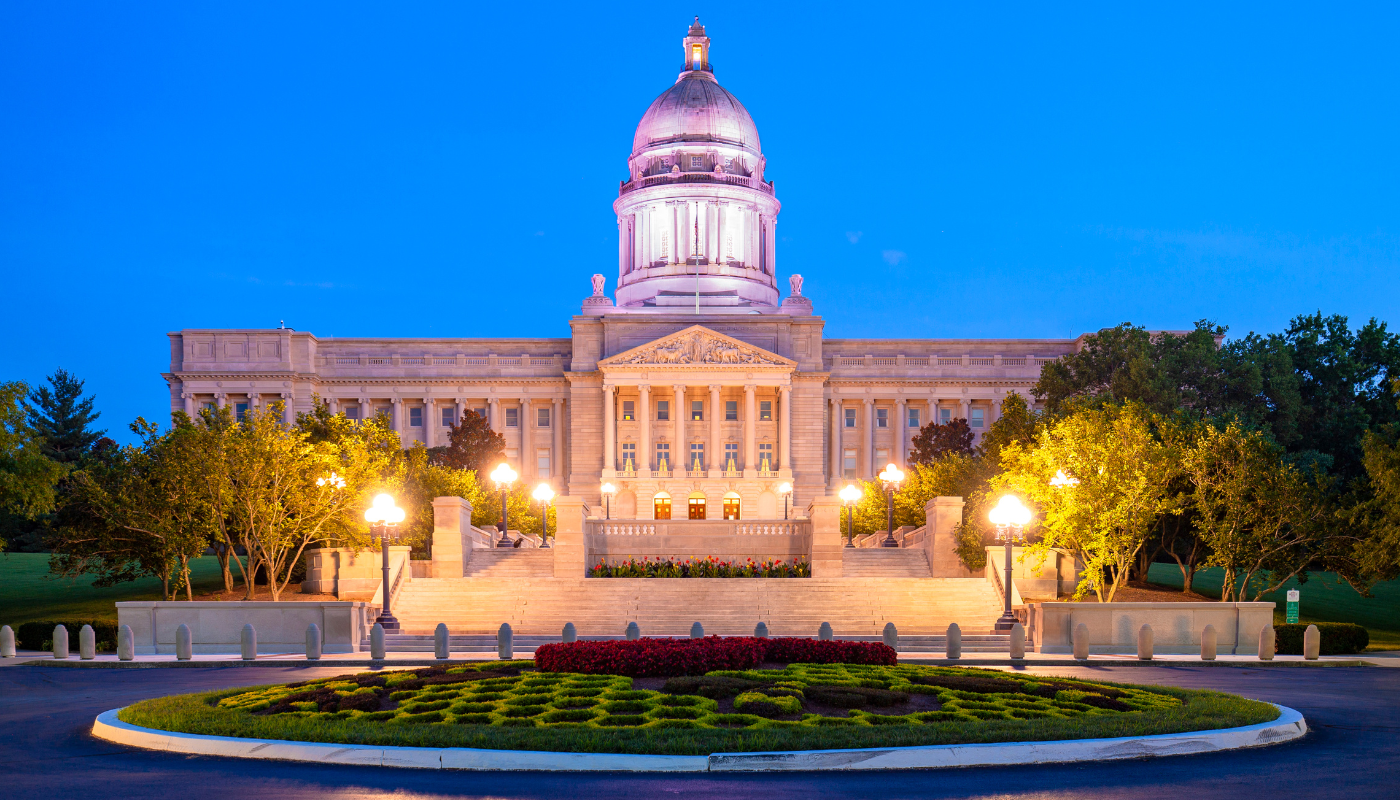 House Bill 1 in the 2022 Kentucky General Assembly is the next step in a legislative effort to phase down and even eliminate Kentucky’s income tax. This policy path is quite likely the most dangerous ever considered in the modern history of the commonwealth. It marches toward elimination of the source of 41% of state revenues with no plan — and no realistic options — to fill the massive budget hole that will result.

This move also provides the biggest tax breaks to those who need it least. The 0.5% income tax cut in HB 1 alone gives an average annual tax cut of $5,528 to the wealthiest 1%, while providing no help to an estimated 1.3 million low-income adults, seniors and kids — those most in need of financial assistance. The inevitable cuts to vital public services and increases in sales taxes will harm ordinary Kentuckians far more than the benefit from the tiny income tax cut they may receive.

HB 1 will damage services that Kentuckians rely on, and is fiscally irresponsible

While the existing rainy day fund balance is large and projected to grow further this year and potentially next year, those surpluses are the result of temporary factors not expected to continue. A total of 49 states reported a budget surplus last year according to the National Association of State Budget Directors (NASBO). State tax receipts for all states grew 16.6% in 2021 and 14.5% in 2022, similar to Kentucky’s 10.9% in 2021 and 14.6% in 2022.

The primary cause of these strong receipts is the short-lived economic effects of enormous federal pandemic aid. Kentucky’s economy received over $45 billion during the pandemic through stimulus checks, expanded unemployment benefits, a monthly child tax credit, state and local aid, and much more. Much of that assistance has already expired, and the remainder will be spent soon.

A second critical temporary factor boosting surpluses is the highest inflation in 40 years, which has increased sales and income tax receipts due to more expensive purchases and higher wages. But rising prices also affect the spending side of the budget, with increased state costs to hire and retain employees, construct buildings and buy supplies. Taking inflation into account, revenues grew by a less impressive 5.3% in 2021 and 5.6% in 2022, and are projected to decline in 2023 and 2024 with the reduction to a 4% income tax rate, as shown below.

It is also noteworthy that the individual income tax is the main source of recent surpluses. It is responsible for 47% of state tax receipts above forecast for 2021 and 2022.

Upon full implementation in 2025, the reduction of the income tax rate to 4%, on top of the cut to 4.5% under last year’s House Bill 8, will cost an estimated $1.2 billion annually. As shown in the graph below, that is more than the state spends on all of higher education — eight universities and 16 community colleges. It is half of what we spend on Medicaid, which provides health care to 1.5 million kids, seniors, low-income Kentuckians and people with disabilities.

That means if Kentucky were to rely on the rainy day fund to fill the budget gap created by HB 8/HB 1, it would deplete the current balance entirely in approximately three years. That assumes the economy hits no recession, but forecasters are increasingly concerned about the likelihood of a recession given Federal Reserve actions to quickly and aggressively raise interest rates.

Budget cuts down the road will particularly hurt low-income people, Kentuckians of color, children, seniors and people with disabilities and special needs. Cuts will hit rural Kentuckians especially hard because of the importance of state spending to local economies ravaged by the decline of coal, tobacco and other traditional industries. For example, whereas 33.5% of Anchorage Independent School District’s state/local public school funding comes from the state, 88.4% of Wolfe County’s come from the state. Similarly, the share of residents covered by the state-funded Medicaid program ranges as high as 78.6% in Owsley County compared to 21.2% in Spencer County. This state spending doesn’t just support rural schools and keep people healthy, it’s responsible for keeping many residents employed in schools, hospitals and health clinics.

Cuts will not pay for themselves, and future options are few and regressive

There is no evidence supporting the trickle-down theory that income tax cuts will grow Kentucky’s economy. Kansas famously had to roll its income tax rate reductions back after five years following credit downgrades, huge budget deficits, schools forced to end the year early and a state court ruling on the unconstitutionality of its education funding. Other states that reduced income taxes in recent years, including Arizona, Ohio, Maine, Wisconsin, North Carolina and Arizona, saw lower tax receipts as a result, not stronger economic growth. A total of 41 states have income taxes because they are the cornerstone of a revenue system that can adequately fund education, health, infrastructure and quality of life investments critical to economic growth. In fact the nine states with the highest top income tax rates are doing as well or better than the nine states lacking income taxes when it comes to measures like GDP growth, GDP growth per capita and average income growth.

The sales tax is Kentucky’s only revenue option that comes close to what we collect from the income tax, but the makeup of Kentucky’s economy makes fully replacing the income tax with a higher sales tax practically impossible. Of the nine states that lack an income tax, most either have a large tourist industry which allows them to rely on out-of-state consumer spending (Tennessee, Florida and Nevada) or a large natural resource industry they can tax (Texas, Alaska and Wyoming). Alaska is the only state that has ever eliminated its income tax, and it did so only after opening a major trans-state pipeline.

An eventual sales tax increase will hit low-income Kentucky families hardest. The Institute on Taxation and Economic Policy (ITEP) reports that the poorest 20% of Kentucky families spend 5.6% of their income on sales and excise taxes, while the richest 1% spend only 0.8% of their income on those taxes. Replacing the lost revenue of dropping the income tax rate from 5% to 4% would require Kentucky to raise its sales tax rate to 7.4%, according to ITEP. That would be the highest state sales tax rate in the country.

Sales taxes on services and other currently-exempt purchases are also a very limited and problematic option. The 35 new services taxed under HB 8 raise only about $1 in taxes for every $12 Kentucky will lose by reducing the income tax to 4%, as shown below.  With HB 8 and the changes made in 2018, the state has already expanded the sales tax to the low-hanging fruit in terms of taxing previously exempt purchases. Even applying the sales tax to groceries — which is highly regressive, and should not be under consideration — would raise only approximately half of the lost revenue from dropping the income tax rate from 5% to 4%.

HB 1 is unfair, with huge giveaways to the wealthiest and nothing to those most in need of aid

The total dollars will also flow overwhelmingly to the people at the top because of Kentucky’s substantial and growing income inequality. The 20% of people the highest incomes will get 65% of the tax cut, as shown below. The richest 1% of Kentuckians alone will get 20% of the tax cut, while the poorest 20% will get only 1%.

Because of prior Kentucky law, HB 1 will be no help to those Kentuckians most in need of aid. The state has a “family size tax credit” that entirely exempts people below the poverty line based on family size from the income tax. The credit also phases out between 100% and 133% of poverty, meaning those individuals have their income tax liability reduced between 10% and 90%. Thus a family of four with modified gross income below $27,750 pays no income tax already, and would not benefit from HB 1, while a family of four with a modified gross income between $27,750 and $36,908 already has their income tax reduced by the family size credit.

Census data shows that 728,596 Kentuckians, 30% of whom were children, lived under the poverty line in 2021. They will receive nothing from HB 1. We estimate another 283,657 Kentuckians earned between 100% and 133% of poverty and thus receive a partial family size tax credit, thereby benefitting little from HB 1.

HB 1 will disproportionately leave out the rural areas of our state, where incomes are substantially lower. The median household income in Oldham County is $99,128, with 16.5% of the population receiving more than $200,000 a year. In contrast, the median income in Wolfe County is only $24,623, with only 0.2% receiving more than $200,000 a year. In a number of eastern Kentucky counties, half of households receive less than $35,000 in income a year.

In addition, HB 1 widens racial inequities. A total of 92% of Kentuckians in the top 20% of tax filers are white, according to ITEP, while 86% of total tax filers are white. In contrast, only 4% of Black Kentuckians are in the top 20% of filers, despite being 8% of all filers. The Black poverty rate is 24.4% compared to the white poverty rate of 15%, meaning nearly a quarter of Black Kentuckians most in need of the help will receive nothing from HB 1.

HB 1 will harm Kentucky far into the future

The eventual harm from cutting or even eliminating the income tax is deep, and the repercussions will extend across generations. Stopping the damage now, before it worsens, is the wise, fair and prudent course for a state that calls itself a commonwealth.