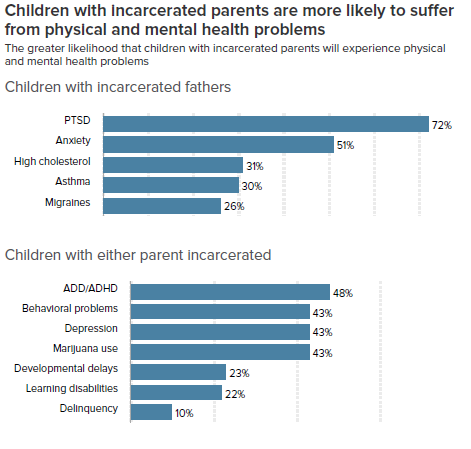 Criminal justice reform is important not just for adults but also for children, as highlighted in a new report from the Economic Policy Institute (EPI). This link is especially relevant in Kentucky given the large share of children with a parent who has been incarcerated as well as opportunity to make needed changes given the momentum around criminal justice reform in our state. If fewer parents are incarcerated — particularly to serve very long sentences — their kids could see improvements in education, better health and more economic opportunities, the report suggests.

Children with incarcerated parents are also more likely to:

In addition, children of incarcerated parents are more likely to experience economic instability and to become poor. Economic problems stem from the loss of a parent’s income — often the primary provider in the family — during incarceration as well as incarcerated parents’ difficulty finding a job after release with a criminal record. According to the report, “Income losses from incarceration and exclusion from post-incarceration employment cause multigenerational harm, because income mobility is rare.”

Given the fact there are racial and social class differences in children’s experiences with parental incarceration, at the national level African American children are more likely to experience these negative impacts — and also benefit from criminal justice reforms. We have previously described the racial disparities that also exist in Kentucky’s criminal justice system. The new report suggests  criminal justice reforms could be a way to help address achievement gaps like those that exist in Kentucky between African American and white children.

If Kentucky passes criminal justice reforms in 2017 that make a meaningful change in incarceration and recidivism rates — including through the efforts of the state’s Criminal Justice Policy Assessment Council (CJPAC) — it could make a big difference in the lives of Kentucky kids.