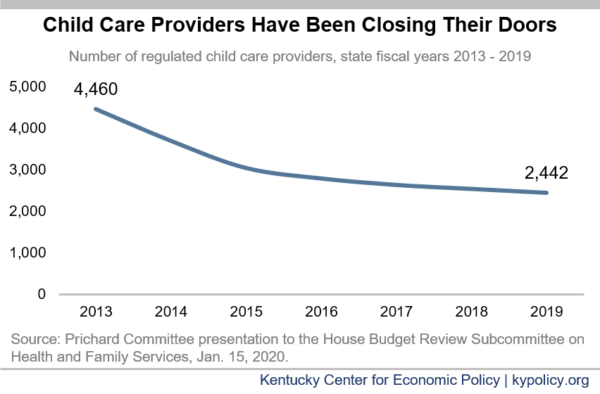 The most active and critical years for children’s physical, cognitive and social development are ages zero to three, so high-quality early child care settings are central to preparing the commonwealth’s kids for their future. Yet funding for Kentucky’s Child Care Assistance Program (CCAP) program is inadequate, compromising the quality, availability and affordability of child care in the state. During a recent Budget Review Subcommittee meeting, the Prichard Committee testified that in order to meet a modest but effective level of child care quality and make more children eligible for subsidies, the state would need to invest an additional $251 million by 2026.

Doing so would enable the state to provide quality child care for 23,000 more kids by increasing the eligibility limit to 200% of the federal poverty level (FPL) – or $52,400 for a family of four – and state reimbursements to child care providers to a weighted average reimbursement of $33 per child per day. Having access to any child care is important for both children and parents, but research has shown that high-quality child care has especially potent benefits for children both immediately, and far into adulthood. These benefits include economic and social wellbeing, but also better health outcomes than for similar peers who did not have quality child care including lower incidence of obesity, hypertension and metabolic syndrome later in life.

Approximately 28,700 Kentucky kids benefited from CCAP last year thanks in part to a $21 million increase in funding during the last budget cycle to raise the eligibility threshold for families to 160% of the current FPL, which is $41,920 for a family of four.

Additionally, an influx of $42 million in federal funds late in 2018 also helped to bolster the program by allowing the state to increase reimbursement rates for providers in counties receiving less than the 40th percentile of market rates. The federal funds also allowed Kentucky to raise the eligibility threshold at redetermination to 200% of FPL, meaning families can earn additional income while participating in the program and not be at risk of losing child care assistance until they hit a higher income than before. Although this was a meaningful step forward, reimbursement rates remain below average market rates for Kentucky child care providers, and below the 75th percentile of market rates – the standard set by the federal Administration for Children and Families.

There are not enough child care spots in Kentucky

Despite recent funding improvements, Kentucky has been losing child care centers for many years. In the wake of the Great Recession in fiscal year 2013 – the year the state placed a moratorium on CCAP enrollment (which lasted through August 2014) – there were 4,460 centers. By 2019, there were only 2,442 – a decline of 45%.

The result of this rapid decline in child care providers is that half of Kentuckians live in a “child care desert” where child care is either unavailable or there are far more children than child care openings. Increasing reimbursement rates further will help make child care centers more viable in areas where incomes are lower, child care is less affordable and CCAP eligibility is higher.

Higher CCAP reimbursements would also allow many of the 12,000 child care workers in Kentucky to get a raise. Early childhood educators, including child care workers, earn 38% less than their colleagues who teach grades K-8, which partially explains the fact that early childhood educators are 10 times more likely to earn at or below the poverty line ($25,750 for a family of four in 2019, for example). Improving teacher pay is not only important to help increase the standard of living for a critical part of our workforce, but would contribute to higher quality care, as well. 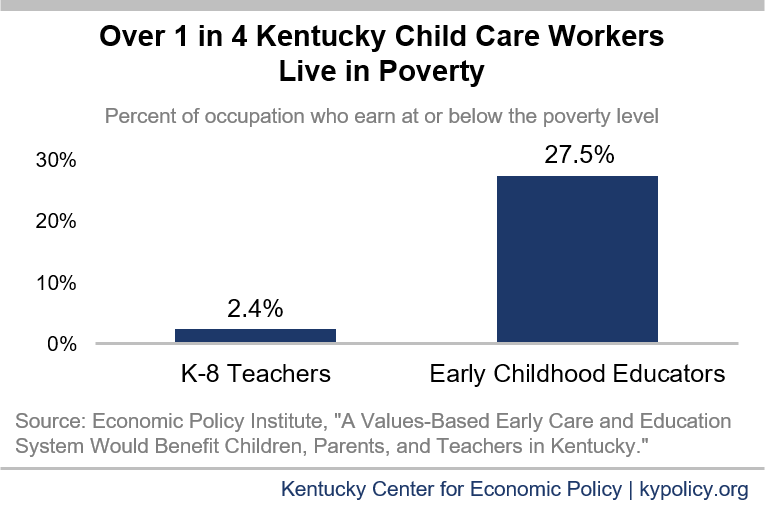 Despite typically low pay for child care workers, child care remains very expensive for Kentucky families. The average annual cost of full-time child care for an infant in Kentucky is $6,258, compared to Kentucky Community and Technical College full-time tuition of $4,176. Even families who qualify for subsidies under CCAP still have a daily copay ranging from $0 to $25 based on their monthly income, family size and the number of children they have enrolled. Additionally, families are responsible for paying the difference between the state reimbursement and what the child care center charges the general public, which is known as “overage.”

As lawmakers gather to discuss what the commonwealth values through the state budget, they should pursue greater investment in CCAP as well as opportunities to increase revenue to do so.