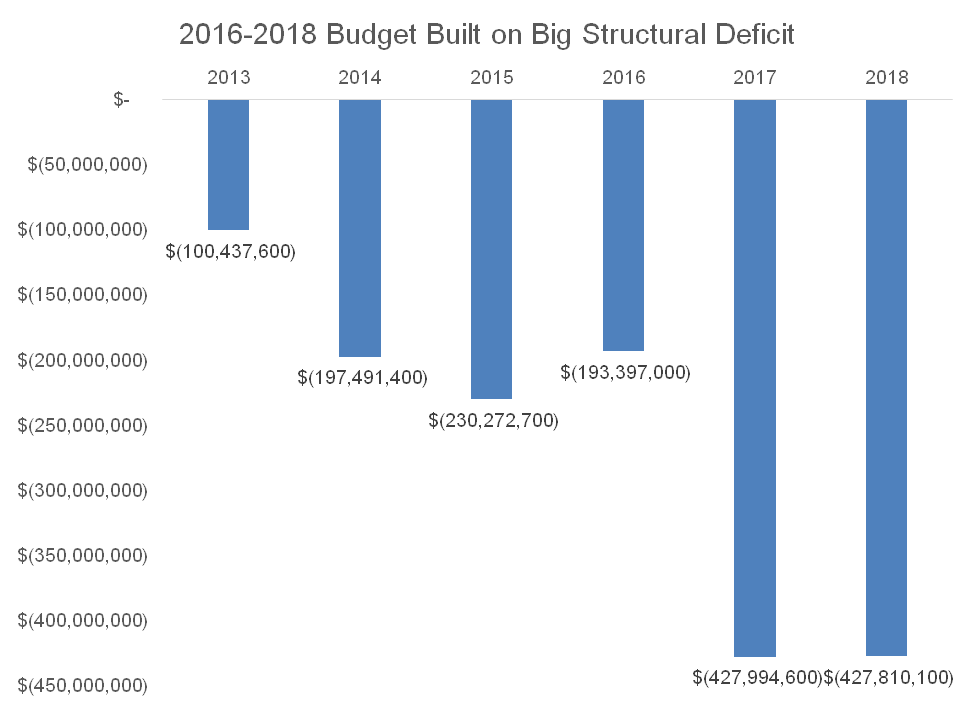 The new two-year state budget that began in July relies on a substantial amount of one-time monies to balance its books — more than twice as much as was used in each of the previous two budgets. That presents an extra challenge when the state comes back to develop a new budget in 17 months, as the Kentucky General Assembly must find those dollars again plus other money to deal with rising costs and the state’s many needs.

The gap in General Fund monies between what the new budget spends and what it brings in as far as recurring revenues — what’s called the structural deficit — amounts to $428 million a year in 2017 and in 2018. As seen in the graph below, the annual gap in the last two budgets ranged from only $100 to $230 million (although structural deficits as big as in 2017 and 2018 existed in some prior years).

Most of the gap is closed by $518 million in fund transfers over the biennium, which are monies intended for other purposes that are moved to the General Fund to help pay expenses. In particular, the state relied on $375 million pulled out of the Kentucky Employees’ Health Plan (another $125 million was also taken out of the fund and transferred to a so-called permanent pension fund to be used at a future date). The health plan had monies that could be transferred primarily because the state has shifted more of the cost of health insurance to public employees in recent years in the form of higher deductibles and co-insurance.

The remainder of one-time monies came from General Fund revenues exceeding what the state originally projected would come in both in 2015 and in 2016. Stronger than expected economic growth, and the resulting income and sales tax revenue, are the main cause. Those extra monies created a carry-forward and put more money into the rainy day fund. But the new state budget spends $281 million of that carry-forward money in 2017 and 2018 plus spends $57 million out of the rainy day fund.

The new budget includes major cuts — 9 percent to many parts of state government and 4.5 percent cuts to higher education, on top of 15 rounds of previous cuts since 2008. But it also puts a record amount of extra money into meeting our state’s pension obligations. Even worse cuts or continued underfunding of pensions would have occurred if the state hadn’t had access to the one-time monies used to plug the hole in the budget.

That fact presents a challenge as Kentucky approaches its next two-year budget. Although some amount of one-time monies will be found again (as they always are), if such dollars are difficult to identify next time it will make the already-severe budget challenge even harder, and the ongoing need to raise more revenue through ending tax breaks and loopholes that much more important.