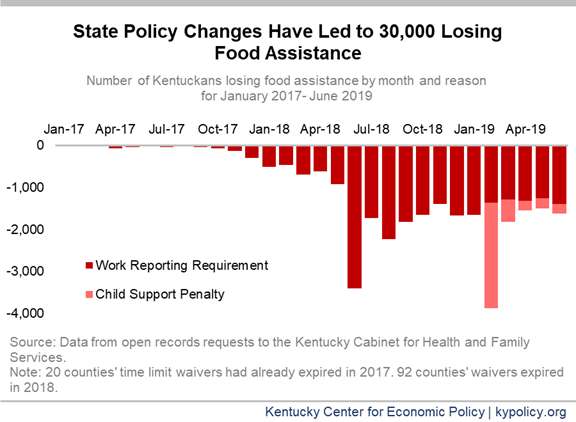 New state data shows that nearly 30,000 Kentuckians have had their food assistance taken away since January of 2018 due to barriers the state has recently erected. Less money for groceries worsens food security and can reduce health and weaken local economies due to fewer federal dollars being spent.

The total number of people who have been kicked off the Supplemental Nutrition Assistance Program (SNAP) in Kentucky from 2018 through August of this year is roughly equivalent to the entire student body at the University of Kentucky. Most of them (25,400) have been kicked off as the result of a 2018 decision by the state to require some adults to report work hours, sometimes referred to as the “20 hour rule.” Another 4,400 have lost food assistance due to the state’s decision to revoke participation in SNAP from non-custodial parents who are behind on child support payments.

Meanwhile, the Public Assistance Reform Task Force has convened during the interim to discuss SNAP and other forms of assistance for Kentuckians, as well as a set of draconian proposals introduced in House Bill 3, filed in the 2019 legislative session. The committee meets again today and then again on November 18 and will likely submit findings and possible recommendations to the Legislative Research Commission by the end of November.

“Making access to SNAP contingent on reporting work hours to the state misses the reality that too many Kentuckians face,” Kentucky Center for Economic Policy’s Policy Analyst Dustin Pugel, said. “Some parts of the state still lack an adequate number of jobs, and it’s not uncommon for folks to struggle to get enough work hours on a consistent basis due to irregular employer scheduling. It is also difficult to navigate the layers of red tape necessary to report hours in a state where too many people lack reliable transportation and internet access. Taking away food assistance has never gotten people more hours or created jobs in communities that don’t have them.”

Starting in January 2018, Kentucky rolled out a work reporting requirement as a condition of receiving SNAP. By May 2018, all but eight counties had the requirement in effect. A recent communication from CHFS announced that as of January 1, 2020, the waiver will expire in these remaining counties. It will be the first time since the requirement became an option for states in 1996 that no Kentucky county – regardless of the availability of steady employment – will be provided relief.

Only 200 of the people who lost SNAP as a result of the reporting requirement have regained benefits during the same period, according to the data.

A separate policy was enacted at the beginning of this year that cuts off food assistance from non-custodial parents who are behind on their child support payments. Through August, it resulted in 4,400 people losing food assistance, 90% of whom live with other people (including children) who now have less money to spend on groceries. About 1,300 of these individuals have regained SNAP, but it is not clear how many regained assistance because they made a child support payment versus those who received an exemption.

Kentucky Voices for Health Policy Analyst Jason Dunn said “Parents ordered to pay support should absolutely do so to the best of their ability. However, sometimes those parents face layoffs, illness, injury or other factors that reduce their incomes to the point of poverty and an inability to pay their court-ordered support. Programs like SNAP can help meet the needs of these parents until they are able to continue payments or have support orders changed to reflect their new circumstances.”