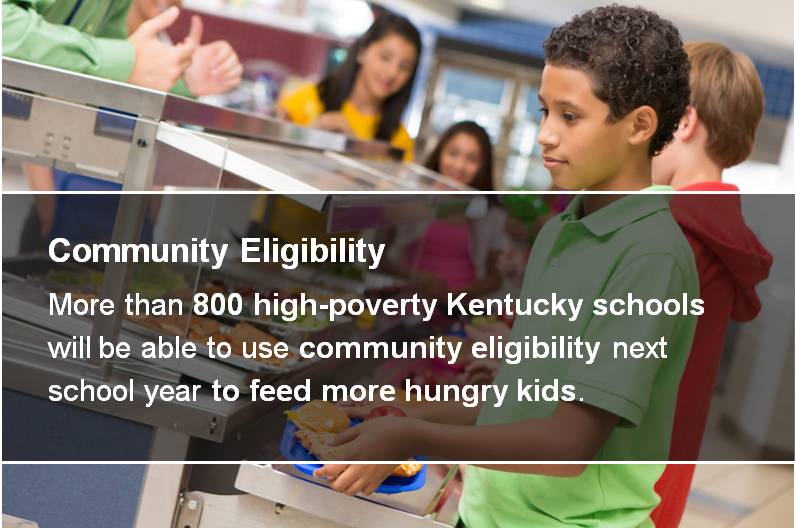 More than 800 Kentucky schools will qualify for the Community Eligibility Provision (CEP) this coming school year, a federal initiative that increases the number of children eating school meals and reduces administrative paperwork associated with meal programs by providing breakfast and lunch to all students at high poverty schools, free of charge.

Kentucky is one of eleven states that have participated in the program’s initial roll-out since 2011. In 2014-2015, eligible schools in all states will be able to join, as will those Kentucky schools that have not yet opted in. Eligible schools have until June 30, 2014 to decide whether or not they will participate in the 2014-2015 school year.

Early results show that CEP is leading to more children eating school meals in Kentucky, particularly breakfast. In the first two years of implementation, breakfast participation in CEP schools grew from 45 percent to 64 percent. By providing breakfast to all students, the program allows for alternative delivery methods and removes barriers to participation: breakfast in the classroom and “grab and go” kiosks in the hallways after first period, for instance, mean that late buses, crowded cafeterias and the stigma associated with free and reduced-price meals no longer keep students from getting a nutritious start to their day.

“Community eligibility has been successful in reaching Kentucky’s low-income children whose families may be struggling to put food on the table,” stated Anna Baumann, policy associate at the Kentucky Center for Economic Policy. “The more eligible Kentucky schools that take part in the program, the more Kentucky kids will have at least two good meals a day, helping them to succeed in the classroom and improving their health and long-term well-being.”

A majority of students at CEP eligible schools qualify for free and reduced-price meals. But instead of relying on the traditional school-wide application process for federal meal programs, CEP identifies these students through another program with a rigorous eligibility determination process, like the Supplemental Nutrition Assistance Program (SNAP) or Medicaid.

As a result, CEP not only reduces hunger for greater numbers of low-income students, but it also helps food service departments streamline their operations and reduce paperwork. When more children eat, the per-meal cost of serving meals decreases. These economies of scale, combined with administrative simplifications, help to cover the cost of providing meals to students who might otherwise pay. Greater participation, increased federal reimbursements and additional revenue from a la carte purchases have allowed some Kentucky schools to improve meal quality, as well.

Baumann continued, “Kentucky’s early success with CEP and development of best practices since 2011 are good news for schools considering the program in 2014-2015. Adopting the program is an important investment in students who might otherwise struggle to get enough food to eat each day.”

Diaper and Menstrual Product Taxes Worsen Inequity. Some Council Members Want to Pressure the State to End Them

House Bill 4: Changes to Unemployment Insurance Go Into Effect in 2023