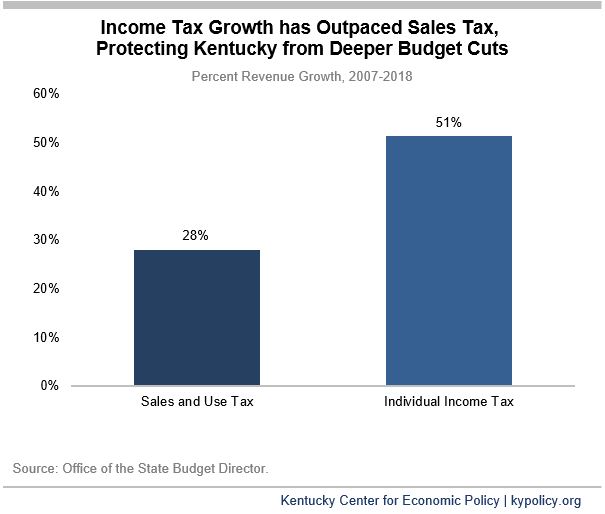 Kentucky ended the 2018 fiscal year with $119.1 million more in the General Fund than was predicted by the official revenue estimate. However, that estimate had been revised downward by $138.5 million in October of 2017, meaning actual 2018 receipts came in below the original forecast. Worse, the October revisions resulted in another round of budget cuts for state agencies on top of 18 prior rounds of cuts. Those cuts were particularly difficult because they came in the second half of the fiscal year.

Total General Fund receipts in 2018 were $10.8 billion, which represents a growth rate of 3.4 percent when compared to 2017. 2018 marks the eighth consecutive year that Kentucky has experienced year over year growth in receipts, though it has been tepid and insufficient to meet necessary expenditures.

Looking at individual General Fund revenue sources in 2018, there were no surprises or significant deviations from projections in the receipts for several relatively small taxes. Coal severance and cigarette tax receipts continued to fall as expected, and the notoriously volatile corporate income tax and limited liability entity tax, which are now estimated together, were just shy of the combined estimate for the two taxes. The lottery also contributed $10 million more than last year based on the strength of product sales.

Our two main revenue sources – the individual income tax and the sales tax –contributed $4.6 billion and $3.6 billion respectively to the General Fund in 2018.  The income tax comprised 42.4 percent of total revenue and the sales tax, 32.6 percent. In terms of growth, both sources performed better than all other taxes in 2018, increasing by 4.8 percent and 3.5 percent respectively compared to 2017, with the income tax’s stronger growth being part of a long-term trend as shown in the graph below.

In a move that does not bode well for future revenue growth, this past session the General Assembly passed tax changes that shift reliance away from our individual income tax to the sales tax. This tax shift – which asks more of low- and middle-income Kentuckians and is a huge tax break for the very wealthy –  was accomplished by using most of the projected revenue from a sales tax base expansion and cigarette tax rate increase to pay for a reduction in the top individual and corporate income tax rates and to provide more tax breaks for corporations. While we know the income tax rate reduction is extremely costly and will grow more so over time, good data does not exist with which to estimate how much will be generated from the sales tax base expansion on services. Despite these uncertainties, the long-term outlook is not positive: the weakened income tax, decreasing revenue from the cigarette tax increase and characteristically slower growth in the sales tax and make more rounds of budget cuts likely going forward.

In the short term, it is difficult to know what to expect from a revenue standpoint. The 2018-2020 budget was balanced by including anticipated revenues from the 2018 tax changes. By statute, the total revenues anticipated by the General Assembly become the official revenue estimate post-session. The new revenue estimates are $11.2 billion for 2019 and $11.5 billion for 2020 – $192.3 million and $197.5 million more respectively than the pre-session CFG estimates – and the total amount has not been allocated among the various revenue sources. These estimates do not incorporate expected additional revenues Kentucky will receive due to a United States Supreme Court decision issued after the session that paves the way for states to begin more broadly collecting sales taxes on on-line purchases.

Later this month, the state will close the books on 2018 and we will then have a better picture of where we stand financially. We may also have more clarity regarding what expected revenues are by tax type, based on amounts included in the enacted budget. In the press release issued with the year-end receipts report, the State Budget Director stated that he will recommend to the Secretary of Finance that any revenues remaining from the surplus after the payment of Necessary Government Expenses (NGEs) from fiscal year 2018 be carried forward in the General Fund Surplus Account. This recommendation runs counter to the language included in the enacted executive branch budget, which requires any excess funds to be applied to the unfunded pension liability of the Kentucky Employees Retirement System nonhazardous pension fund.