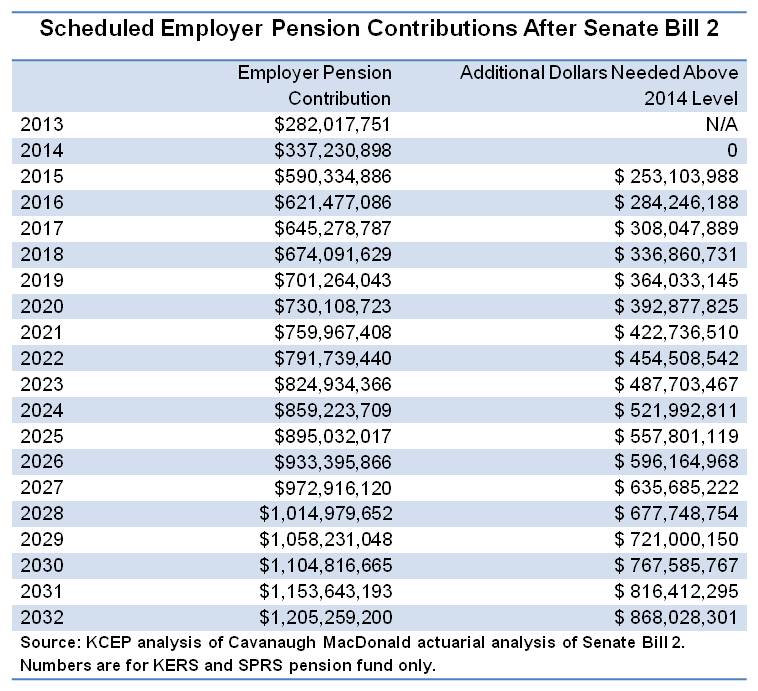 After the General Assembly passed final pension legislation, some proponents of Senate Bill 2 hailed it as “historic.” But the costs Kentucky faces to pay down its unfunded pension liability remain substantial—and the new revenues generated by the General Assembly to make those payments are meager.

After Senate Bill 2 is implemented, the employers that participate in the Kentucky Employees Retirement System (KERS) will need to come up with an estimated $590 million in pension payments in 2015 and $621 million in 2016, an increase of $253 million and $284 million from the 2014 level, respectively.1 As we’ve outlined previously, the revenue bill is expected to generate only $31.7 million in annual net new state dollars.

The remaining employers are wide variety of state agencies—from tourism to energy to insurance regulation—and other entities many of which depend heavily on state dollars, including the regional universities and community college system, various social services organizations, health departments and regional mental health centers.

For example, the Department of Highways is the second-largest KERS employer, as mentioned above, and has nearly $300 million in annual personnel costs but receives no General Fund money. Instead, it relies substantially on the Road Fund which was cut by $34 million in the pension revenue bill. The recent bankruptcy filing of mental health provider Seven County Services suggests how difficult it is for many agencies to make up the liability without more state support—especially given how much their core state funding has been cut.

As the table below indicates, the costs associated with paying the liability are quite large and are projected to grow about 4 percent per year after 2016. And these numbers are lower than they should be if the state was being fiscally responsible, because one measure in Senate Bill 2 extended the time period the state will use to pay off the liability—which is akin to spreading out your mortgage or student loan debt over a greater number of years. While that lowers annual payments, it also increases total long-term costs.

Even before pensions are considered, revenues for the next budget will be far short of what Kentucky needs to roll back painful budget cuts and make the needed investments in schools, health, human services and other areas. The only way revenues will be adequate is through a real tax reform plan that allows the state to meet its promises to workers and its responsibility to the Commonwealth’s future.