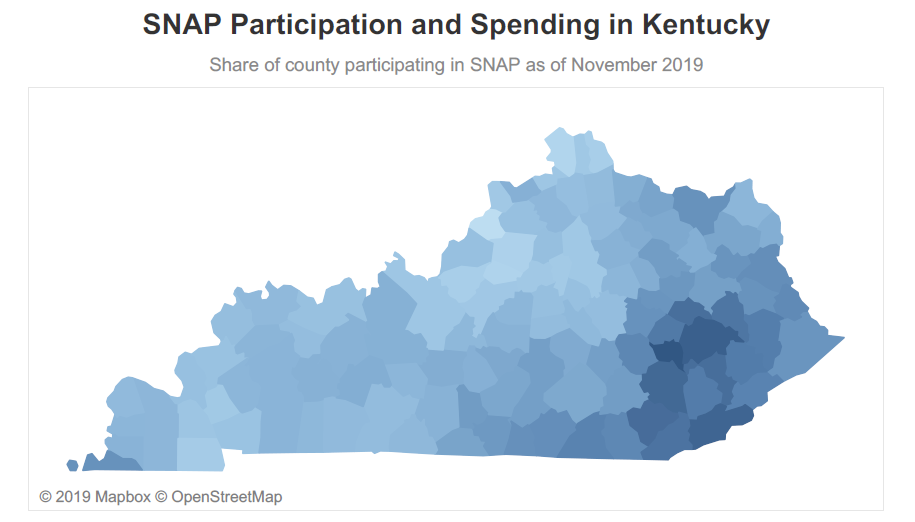 When all Kentuckians are able to meet basic needs and be healthy, they are equipped to contribute to their communities. Thanks to Governor Beshear’s recent withdrawal of a waiver proposal to take away health coverage for people who fail to meet a work reporting requirement, Kentucky has protected health and has become the first state to fully eliminate this threat. Going forward, the state has another important opportunity to make sure Kentuckians’ basic needs are met by reinstating time limit waivers on food assistance in economically struggling counties.

The Medicaid waiver was a counterproductive plan that would have taken health care away from an estimated 100,000 Kentuckians, and its removal returns Medicaid to its original goal of providing medical assistance to those who cannot afford it. Along with protecting Kentuckians’ ability to see a doctor when needed, withdrawing the plan also makes the state more productive. When people can participate in preventive services, get treated when ill, and avoid economic insecurity due to health issues, they are more able to be consistently employed. Decades of evidence shows that work reporting requirements do not improve people’s employment – neither their ability to get a steady job with enough hours, nor the quality of that job in terms of pay and benefits.

Similar to Medicaid, the Supplemental Nutrition Assistance Program (SNAP) has seen federal and state proposals to erect barriers to food assistance based on whether people comply with work reporting requirements. Earlier this month the USDA released a rule restricting state’s flexibility to waive work requirements for adults without a disability or dependents who need food assistance in areas where there are insufficient jobs. Under current rules for SNAP waivers, 114 counties of Kentucky’s 120 could be waived by the state as of November. However, USDA’s new rule starting April 2020 diminishes that number to about 30 counties.

Previously in Kentucky, most counties were exempt from reporting work under the state’s ability to waive the time limit rule, and some counties had always been exempt due to a chronic shortage of work opportunities. But in 2018 the Bevin administration began letting all of these waivers expire, taking food assistance from an estimated 25,400 Kentuckians since January 2018. The eight counties that did not expire initially were part of a federal pilot project and are up for expiration January 1, 2020. As with health assistance, being able to put food on the table improves families’ ability to become and stay healthy, a pre-condition for stable employment.

If the federal rule change is held up in litigation, Governor Beshear will have the opportunity to further support health by reinstating time limit waivers in all but six counties. Doing so would ensure that more Kentuckians’ ability to keep food assistance isn’t contingent on them overcoming many structural barriers to reporting work hours: living in an economically distressed community, race or age-based discrimination, disability status, the collateral damage of contact with the criminal justice system, and inadequate access to internet, to name a few. If the rule change does go into effect, the administration can still reinstate the waiver for the roughly 30 counties that would qualify under the new criteria.

Growing evidence supports most people participating in SNAP who can work, do work, including the adults without a disability or dependents who would be required to comply with reporting red tape under this rule. Over 497,000 Kentuckians participate in SNAP, which is one of the most effective programs shown to directly reduce hunger and combat poverty. Access to food assistance is a lifeline when times are tough and a foundation of an economically secure future.