Governor Bevin suggested in his State of the Commonwealth speech that his tax plan will generate more revenue to help Kentucky pay down its large unfunded pension liabilities. Kentucky needs more revenue to honor those debts and make the public investments that build thriving communities. But there are big questions about what he means by more revenue and whether the kind of tax plan he is talking about will do the job.

There are three ways more money could come up in these discussions, only one of which would actually work to meet Kentucky’s needs.

True tax reform results in additional revenue that is sustainable over time. That happens by ending exemptions, loopholes and tax breaks so revenue better keeps up with economic growth. That means making sure taxes apply to expanding sectors of the economy as well as ensuring those whose incomes are growing the most — the wealthiest people — are chipping in according to their ability to pay.

This report outlines tax reform options that would generate real money, including limiting income tax breaks for those at the top and creating a new income tax bracket for high earners, expanding the sales tax to services, allowing property taxes to grow with property values and closing corporate tax loopholes.

A second outcome is for a tax plan to generate more revenue at first, but for that revenue to fade away over time — at some point resulting in less revenue than if no changes were made at all. That fade away will happen if Kentucky shifts from more productive to less productive revenue sources.

The governor appears to favor an approach that would end up there. Moving from a “production- to a consumption-based tax system,” as he has expressed interest in doing, is another way of saying we should reduce reliance on income taxes and increase reliance on sales taxes. But sales tax revenues have slower growth than income taxes — see the graph below for an example.

Even if Kentucky expands the sales tax base to include faster-growing services, sales tax revenue growth will still lag way behind growth from income taxes. That’s because incomes are growing much more rapidly at the top, and those people spend only a portion of their income — meaning much of it is not subject to sales taxes. Because a shift from income to sales tax means lower taxes where the growth is happening, we end up with less revenue down the road. 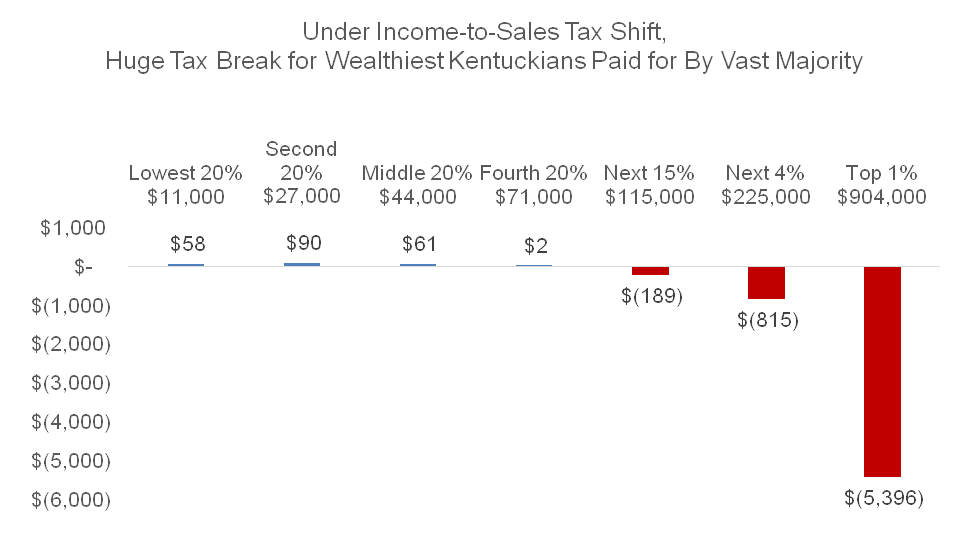 A third way claims an income to sales tax shift will lead to economic growth as a state attracts businesses and entrepreneurs by reducing taxes on high-income people and corporations — ultimately resulting in more revenue to the state. That’s the assumption states like Kansas and North Carolina have used in recent years based on input from people like Art Laffer (who is advising Kentucky’s tax plan). So-called trickle-down theory has been a disaster where it’s been tried, leading to reduced revenue and major budget cuts.

Tax cuts are costly and ineffective at promoting economic growth, and they undermine investments in things like schools, health and roads that create greater prosperity. Tax policy does little to nothing to attract millionaires, entrepreneurs and others. State corporate taxes are also a small part of the cost of doing business, and the vast majority of job growth in a state comes from local start-ups and expanding businesses rather than companies lured to a state. States are smarter to focus on the fundamentals: building a skilled workforce and improving the infrastructure and quality of life (all of which require tax revenues) rather than giving away the tax base.

In short, the idea that reducing certain taxes leads to more revenue is deeply flawed.

When an elected official says they want to raise more revenue through tax reform, it’s important to look at their assumptions and the specifics of what they propose before accepting claims that the plan will mean additional revenue for important investments.