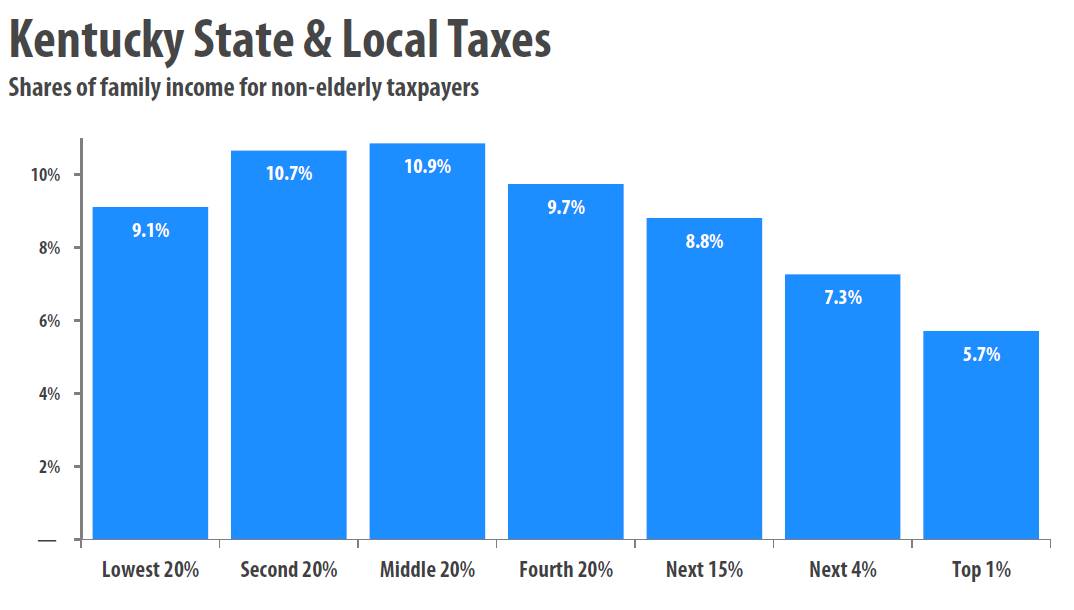 New Report: “Who Pays? A Distributional Analysis of the Tax System in All 50 States”

While the poorest 20 percent of Kentuckians pay 9.1 percent of their income in state and local taxes and the middle 20 percent pay 10.9 percent, the wealthiest one percent pay only 5.7 percent, according to the fourth edition of “Who Pays? A Distributional Analysis of the Tax Systems in All 50 States,” released today by the Washington-based Institute on Taxation and Economic Policy (ITEP).

“Our tax system is upside down,” said Jason Bailey, director of the Kentucky Center for Economic Policy. “It’s the wealthiest Kentuckians who have the greatest ability to pay taxes and whose incomes have grown the most over the past couple of decades. Many poor and middle-class Kentuckians have seen their wages stagnate or decline. Yet the wealthiest pay far less of their income in taxes.”

The tax reform recommendations issued by the Governor’s Blue Ribbon Commission include some measures that would make Kentucky’s tax system less regressive, including a limit on itemized deductions for high-income people, a phase-out of the retirement income exclusion for wealthier retirees and an Earned Income Tax Credit for working poor families. Those ideas should move forward along with other ways to make Kentucky’s tax system fairer while generating the revenues the state needs—including the creation of an additional, higher income tax bracket for wealthier people and the re-establishment of the Kentucky estate tax.

In the debate over tax reform in Kentucky, some have argued that Kentucky should reduce or eliminate its income tax and move toward a consumption-based tax system like Tennessee, Indiana or Florida. But the ITEP report shows that those three states are among the “Terrible Ten” most regressive tax systems in the country. In the Terrible Ten, middle-income families pay up to three times as high a share of their income as the wealthiest families while low-income families pay up to six times as much.

That’s because the sales tax is highly regressive (taking a bigger share of poor people’s income than the wealthy) while the income tax is progressive. In Kentucky, sales taxes take up 5.6 percent of income for the poorest 20 percent of Kentuckians but only 0.8 percent of the richest one percent. “Cutting the income tax and relying on sales taxes to make up the lost revenues is the surest way to make an already upside down tax system even more so,” said Matthew Gardner, Executive Director of ITEP and an author of the study.

The fourth edition of Who Pays? measures the state and local taxes paid by different income groups in 2013 (at 2010 income levels including the impact of tax changes enacted through January 2, 2013) as shares of income for every state and the District of Columbia. The report is available online at www.whopays.org.

The Institute on Taxation and Economic Policy (ITEP) is a 501 (c) (3) non-profit, non-partisan research organization that works on federal, state, and local tax policy issues. ITEP’s mission is to ensure that elected officials, the media, and the general public have access to accurate, timely, and straightforward information that allows them to understand the effects of current and proposed tax policies. www.itep.org.