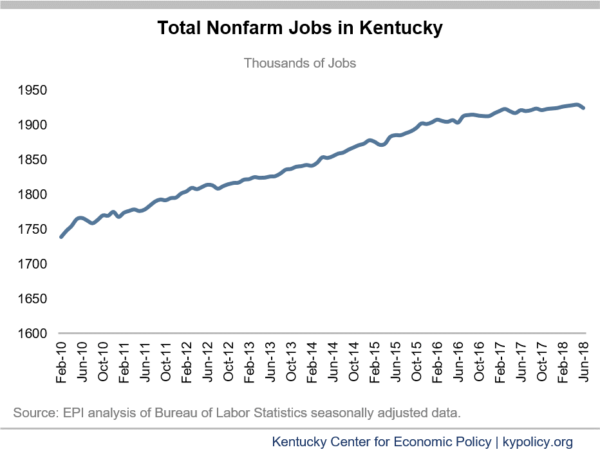 Yesterday, voters in neighboring Missouri rejected the state legislature’s decision to enact a so-called “Right to Work” (RTW) in a landslide referendum, with 67 percent opposing the law. Voters’ opposition should be no surprise given what the research says about such laws, which require unions to negotiate contracts and provide legal representation for employees who do not pay union fees. By making it harder for workers to stick together, these laws lower job quality without growing jobs or strengthening the economy as proponents claim.

RTW has a measurably negative effect on wages, reducing earnings for all workers, even those not represented by a labor union. One important study that controls for more than 40 economic, demographic and other variables across states finds that wages are lower in RTW states than non-RTW states by 3.2 percentage points, and that workers are 2.6 percentage points less likely to have employer-sponsored health insurance in RTW states.

RTW Does Not Propel States’ Economies

RTW has a small, negative to negligible impact on states’ economies. A study submitted in 2008 to Kentucky’s Cabinet for Economic Development by economists from the University of Kentucky’s Center for Business and Economic Research examined the impact of 18 variables on personal income growth and found that RTW has a slightly negative, though statistically insignificant, effect.

RTW Does Not Grow Jobs

Similarly, despite anecdotes about businesses claiming to locate or expand operations based on states’ RTW status, the research shows RTW does not have a statistically significant impact on employment. In other words, RTW does not lead to overall job growth for states that pass it. These findings apply to total job growth as well as manufacturing – the latter a more densely unionized and mobile industry that makes it a good test case for RTW. Other factors appear to matter more in decisions to locate and expand businesses, including the skills of the workforce, quality of infrastructure, quality of life and access to markets and suppliers.

Data from the Bureau of Labor Statistics shows that in the 17 months since RTW passed for which there are data (January 2017 to June 2018), the state has added an average of 441 total nonfarm jobs per month, compared to 1,694 jobs per month in the 17 months before the law was passed (August 2015 to December 2016). The chart below shows that while job growth has been somewhat steady throughout the early part of the recovery, it has tapered off in the last couple of years.

That doesn’t mean RTW caused slower job growth, but it is wrong to accept proponents’ claims that it has resulted in accelerated job growth when, in fact, employment growth has slowed in Kentucky compared to before the law passed and compared to other states.

Missourians saw through the claims about RTW and voted to protect workers and families from the law’s needless harms.