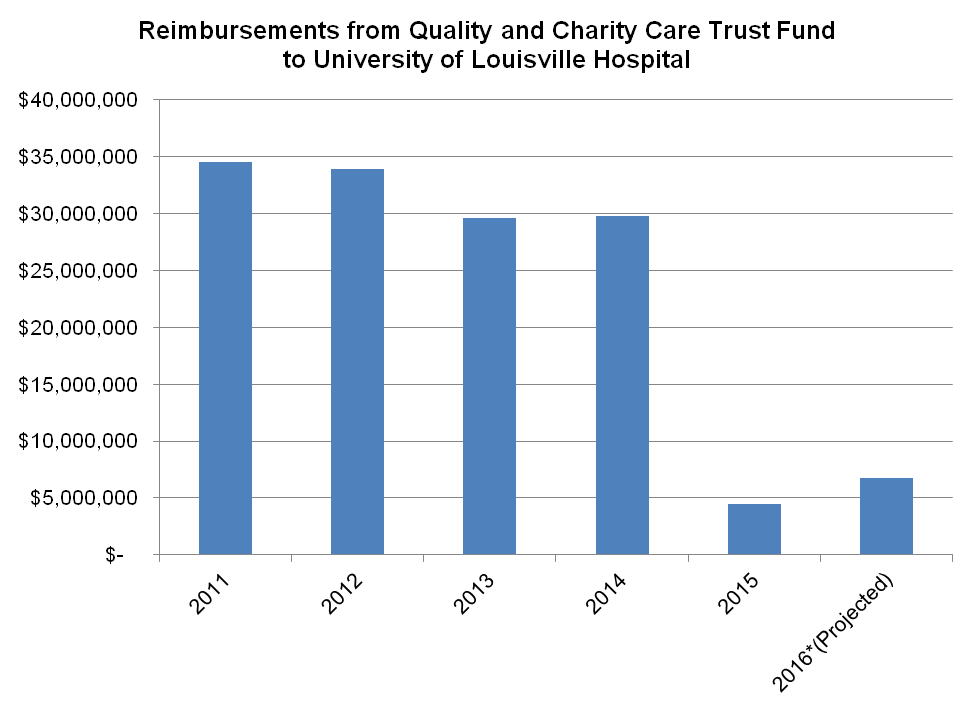 Senate leaders have raised a concern about the House’s inclusion of up to $10.5 million in their budget over the biennium to help cover health care costs for the uninsured at University of Louisville Hospital. They argue that if the Affordable Care Act (ACA) was working so well, that appropriation wouldn’t be needed.

But a look at the data shows costs for the uninsured at the hospital have dropped dramatically since Kentucky created Kynect and expanded Medicaid, saving tens of millions of dollars for the state, the city of Louisville and the university.

The governor’s plans to shut down Kynect and make changes to Medicaid are one reason the state will need to continue putting money into the fund. Those changes could result in fewer Kentuckians with health coverage, driving costs for the uninsured back up.

The Medicaid expansion and other elements of the ACA have made a huge difference in how many University of Louisville Hospital patients have health insurance. The percentage who are uninsured dropped from 25 percent before Medicaid expansion to just 5 percent today, according to a presentation representatives made at the February 25 House Budget Review Subcommittee on Postsecondary Education.

Because so many more people have coverage, the amount the state, university and local government pay for the Quality and Charity Care Trust Fund has fallen to a fraction of its prior level, as shown in the graph below. The total state portion of these costs was only $1.6 million in 2015 and is projected to be around the same amount in 2016.

Kentucky is a national leader for its health coverage gains since the ACA became law. The state’s share of residents who are uninsured fell from 20.4 percent in 2013 to 7.5 percent in 2015, according to a recent Gallup poll — tying Kentucky with Arkansas for the nation’s biggest percentage point decline.

However, the governor’s plans to shut down Kynect and make changes to Medicaid expansion could increase the rate of uninsured over time. Transition from Kynect to a new system will cause disruption, and it’s unclear what level of support will be in place to help people sign up for the coverage they are eligible to receive. Kynect has operated an in-state call center and a community-based outreach network to achieve the gains to date. The most successful states in increasing coverage, like Kentucky, operate their own state-based exchanges but the governor plans to shift to the federal exchange.

Also, future changes to Medicaid the governor has discussed like those Indiana is piloting introduce new cost barriers that have the potential to increase the ranks of the uninsured. Past evidence from states shows that charging premiums to people who live paycheck to paycheck results in some forgoing coverage.

The work of getting people signed up for coverage is an ongoing process, and some inevitably fall through the cracks. That’s part of the reason the state must continue to fund the Quality and Charity Care Trust Fund. But another reason is that more people could end up uninsured due to the changes the administration is considering or putting into place.

In the 2013-2014 biennium, the state had to pledge up to $41.5 million for the Quality and Charity Care Trust Fund, far more than the $10.5 million the House is proposing for the new biennium (and considerably more than is actually being drawn down, which as mentioned is expected to total $3.2 million over the 2015-2016 biennium). Kentucky is saving significant dollars previously spent on the uninsured in its budget because of Kynect and Medicaid expansion, but will spend more in future years if fewer people are covered.