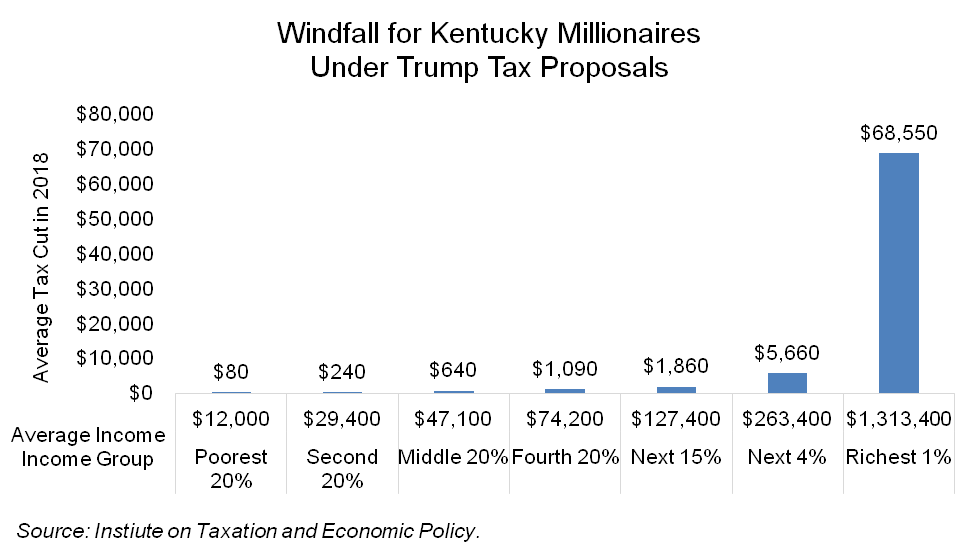 The wealthiest Kentuckians would be winners from the $4.8 trillion in federal tax cuts President Donald Trump has proposed, as shown by a new report from the Institute on Taxation and Economic Policy (ITEP). But as a poor state the tax cuts — coupled as they are with huge federal budget cuts to programs and investments that support our communities — would be an especially raw deal for Kentucky as a whole.

With a smaller share of the nation’s wealthiest people than other states, Kentucky would see relatively little of the total tax break. In fact, ITEP estimates Kentucky is tied for the third smallest share of tax cuts relative to our population.

For people within the state, as the graph below shows, the top 1 percent of Kentuckians, with an average annual income of $1.3 million, would receive an average tax cut of $68,550 in 2018 alone. That is $21,450 more than the average annual income for Kentuckians in the middle 20 percent of the income scale. Kentuckians in the top 1 percent would receive a wildly disproportionate 42.8 percent of the total value of the tax cuts in the commonwealth.

The specific tax changes underlying ITEP’s analysis come from a memo released by the White House in April as well as other hints about the details, including those provided by President Trump last year during his presidential campaign. These proposals include:

They do not include President Trump’s proposal to exempt corporate income characterized as being earned offshore from taxation or his proposal to create a one-time special low rate for corporations to repatriate the $2.6 trillion they currently hold offshore. Both of these policies would disproportionately benefit the wealthiest Americans.