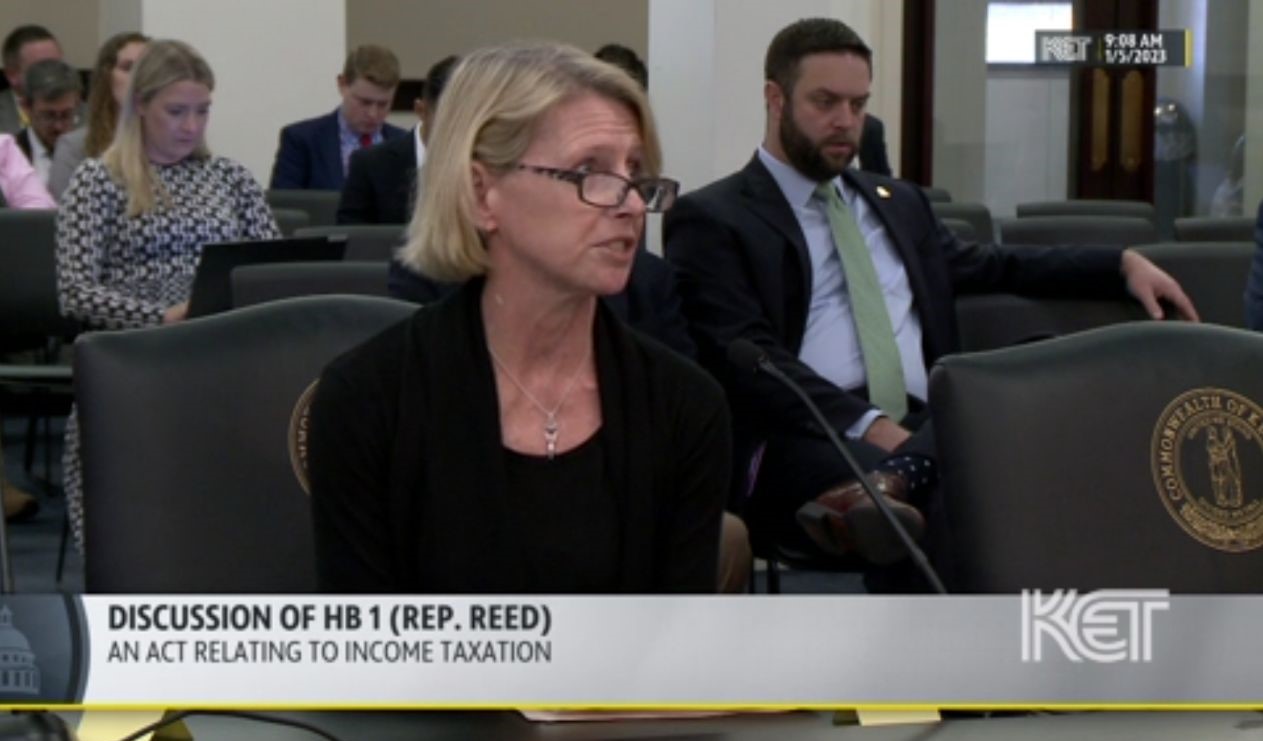 Pam Thomas, Senior Fellow for KyPolicy, delivered the testimony below to the House Appropriations and Revenue Committee on Thursday, January 5. The committee was considering House Bill 1, which would slash Kentucky’s income tax rate to 4% in 2024, threatening to blow a hole in the state budget and spending money that could go to meeting Kentucky’s needs on giveaways to the wealthy.

Chairman Petrie and members of the A&R Committee: Thank you for this opportunity to testify. My name is Pam Thomas, and I am Senior Fellow at the Kentucky Center for Economic Policy. I spent most of my career staffing this committee. I started with A&R in 1991 and retired in 2016. One of my primary roles over all of the years I worked at LRC was to help you understand the policy implications of the decisions you make. And I loved my job because I really felt like I was helping and making a difference.

I come before you today with this background to ask you to reconsider the practical and policy implications of continuing to move forward with additional income tax reductions under HB 1.

From a fiscal standpoint, things are very good right now. Revenues are strong, and the Budget Reserve Trust Fund is at a record level. But that is the case for most states, not just Kentucky. The many billions in federal pandemic aid spurred a fast recovery and inflation is at a higher level than in 40 years, but those causes of higher tax revenues are coming to an end. Forecasters don’t predict the same growth going forward and many fear a recession is on the horizon.

It is interesting to note that without the income tax, we wouldn’t have the significant Budget Reserve Trust Fund balance we have now because the income tax accounted for 47% of revenues above projections.

Last session, you enacted a budget that began to restore some of the funding that had been reduced through the many rounds of budget cuts following the great recession and continuing until just a few years ago. You started to address the state workforce crisis by providing significant salary increases with the promise of more, and made critical investments in many other areas – a great first step in recognizing the importance of investing in the people of the commonwealth.

But much remains to be done. There is a critical teacher shortage, affordable childcare isn’t readily available across our state and the Department of Juvenile Justice and the children it serves are suffering greatly because of the inability to adequately staff facilities. Much more investment is needed to help people in eastern and western Kentucky recover from tornadoes and floods. The list goes on and the needs are great.

My concern about the continued reduction of the income tax rate is that the formula on which the cuts are based is static, backward facing and based on a single year. It doesn’t consider the future or the context within which revenues are raised, and recent elevated collections are temporary and will likely not continue in the future. But the tax cuts are permanent and they will result in a major loss of revenue.

The General Fund will lose over $1.2 billion annually when the cut from 5% to 4% is fully phased in. For scale, that’s more than the $1.1 billion you appropriated to fund the entire system of higher education. It’s a huge hit.

And for most individuals, other than those in the top 20%, the money they keep as the result of the cut is small. Kentuckians who are under the poverty line will receive no benefit at all from the income tax rate cut because they don’t pay income taxes, yet the sales tax is a much bigger share of their family budget than it is for you or I. The typical Kentucky family – those in the middle class – will retain between 38 cents and $5 a week from the rate reduction from 5% to 4%, hardly noticeable in day-to-day life. So there is a huge gap in the loss of revenues at the state level when compared to the actual benefit to individuals and families.

There simply aren’t a lot of other places to go to raise revenue. We don’t have a huge tourist base like Tennessee, Nevada and Florida, and we don’t have oil and gas like Texas, Alaska and Wyoming – six states that do not impose an income tax. Our economy and where the money comes from in Kentucky is very different from these other states and these differences are critically important to consider.

If you ask your constituents, both businesses and individuals, what they want and expect from you as the leaders who decide how state dollars are spent, I believe they will tell you that they want good, strong public schools, access to affordable childcare, safe drinking water and roads that don’t have potholes. They will tell you that they want their fellow Kentuckians who have fallen on hard times and need help to receive help. And when we stop and think about it, isn’t this what we all want for ourselves, our families and each other?

I’ve been part of and observed our state’s budget process for over 3 decades now. Based on that experience, I think there are significant risks that our state’s ability to do those things will be severely compromised moving forward by the cuts to our income tax, the source of 41% of the General Fund, as contained in HB 1.

Thank you for your consideration.