As another college year begins amidst a resurging pandemic, new Census data shows those struggling the most with student debt are also among the hardest hit by COVID-19’s economic impacts. Scholars and advocates continue to call for student debt relief as an effective policy tool for economic stability and recovery.

The COVID-19-related pause on federal student loan repayment has been extended through the end of January, providing some reprieve. But it is only a temporary fix. Follow-through from the Biden administration on forgiving up to $50,000 in student loans would have a profound impact on tens of millions of people, including hundreds of thousands of Kentuckians.

Here’s what to know:

Student loan debt in Kentucky is a crisis. A growing share of individuals and families have taken on debt as the cost of attending college has grown while wages, and also Pell Grant amounts, have not kept pace. Currently, around 616,000 Kentucky residents have outstanding federal student loans, roughly 18% of all Kentuckians over the age of 18 (slightly higher than the national rate). The total principal and interest balance on those loans is $20.5 billion.

Most Kentucky borrowers owe less than $50,000 but still struggle with repayment. The median amount owed in federal student loan debt is around $18,000, but more than 125,000 Kentucky residents owe more than $50,000. The state’s rising loan default rate indicates that even at those lower amounts, borrowers are struggling to repay their loans. The default rate in Kentucky has been rising steadily, from just under 9% in 2013 to nearly 13% at the beginning of the pandemic.

Kentuckians are already doing what they can to reduce and make sustainable the burden of student loan repayment. For example, 20% of Kentucky borrowers, covering 32% of the debt, have already signed up for income-driven repayment plans that cap the monthly payment at 10% or 15% of the borrower’s gross or discretionary income.

Kentuckians with debt are not only young college graduates. Around 20,000 Kentuckians with an average debt of $38,000 are at or near retirement age and likely borrowed to support their children’s education. And many Kentucky students with debt do not have a degree or credential, which could improve their ability to pay down student loan debt. In a dataset of recent Kentucky students at public universities and community colleges (enrolled between 2011 and 2018) who worked in Kentucky during 2019 and 2020, about 62% have not received a degree, certificate or diploma, and 48.6% received federal loans.

Kentuckians with student loan debt have few economic resources with which to pay them back. Over half of the former students in the same dataset had 2020 incomes under $30,000. Compare that, for example, to the $50,000 in annual income a 1-parent, 1-child household in Fayette County needs for a modest yet adequate standard of living.

Institutional failures have made things worse. The student debt crisis has grown alongside steep tuition increases driven in part by declining state investments in higher education. There have been lawsuits against student loan companies for misleading borrowers. And high interest rates, among other student loan practices, make it difficult for borrowers to pay down their balances.

Student debt relief will help white, Black and brown Kentuckians, women and men. Student debt has become nearly ubiquitous, although there are race and gender equity implications for loan forgiveness. Nationally women hold more than two-thirds of all outstanding debt and student loan borrowers who are Black have higher average levels of debt and default. In Kentucky, Black students are more likely to have student debt although median loan amounts are not significantly higher than for white students.

The benefits of debt relief would be life-changing and good for the economy. Student debt forgiveness would make it possible for more Kentuckians to afford basic needs and invest in their futures. They could build financial security by buying a house, start a family and, in some cases, go back to school to complete a degree. That’s good for individuals and families, and good for our economy.

This column ran in the Herald-Leader and the River City News on August 20, and the Courier-Journal on August 24, 2021. 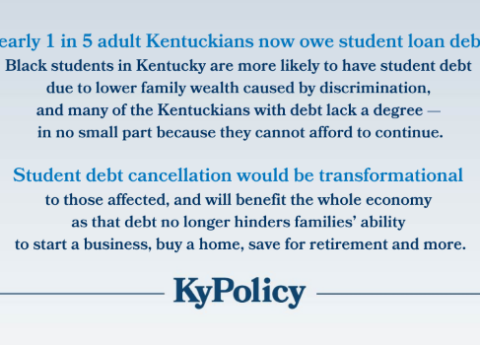