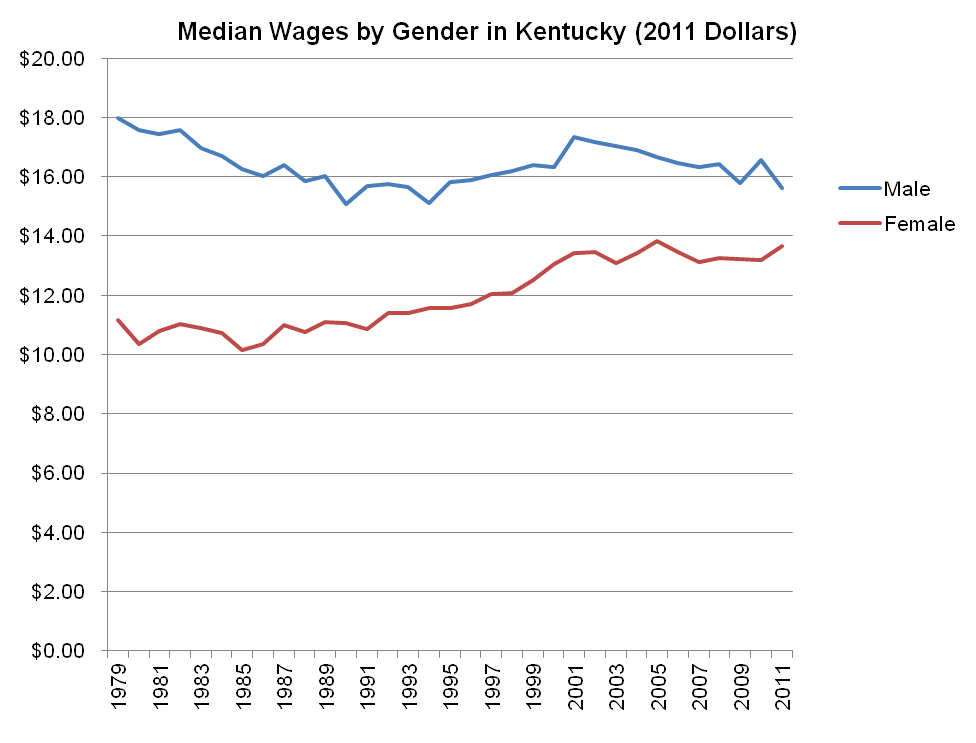 As in the U.S. as a whole, women’s participation in the paid workforce in Kentucky has grown over the last thirty years. Also, the gap in wages between Kentucky men and women, while still large, has been shrinking. However, that gap has narrowed in part because men’s wages have weakened, and male participation in the Kentucky workforce has also been declining.

In recent years, both men and women in the Commonwealth have failed to see progress in wages. Median male wages in Kentucky fell 10 percent between 2001 and 2011, while median female wages grew only 2 percent.

Changing gender roles, demands for two-earner families because of stagnant wages, declines in traditional male job opportunities, and other trends are also leading to a convergence in the share of men and women who are in the paid labor force in Kentucky. The share of working-age Kentucky men participating in the labor force declined from 76 percent in 1981 to 67 percent in 2011, while the labor force participation rate for working-age Kentucky women rose from 50 percent to 56 percent over that period. However, female labor force participation has remained about flat for the last ten years while the male rate has continued to decline.

Due to ongoing discrimination and the persistence of traditional gender roles, women continue to be paid less than men in Kentucky. However, those roles are changing at the same time that opportunities for decent-paying jobs traditionally available to men are in decline. And both men and women continue to struggle in a labor market that simply is not providing enough good jobs.

These realities present the need for state and federal policymakers to further address gender discrimination and gender-based wage disparities—building on the success of the Lilly Ledbetter Act—while doing more to protect and grow good-paying jobs accessible to both women and men.