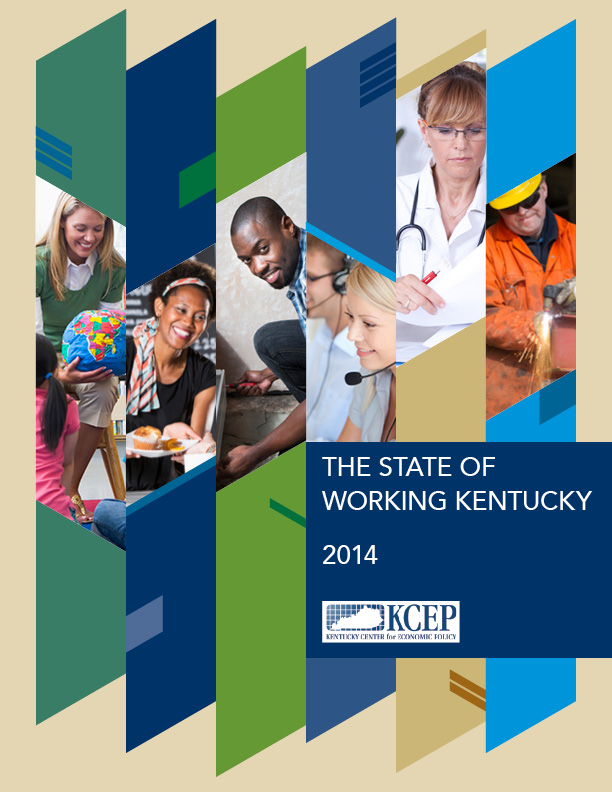 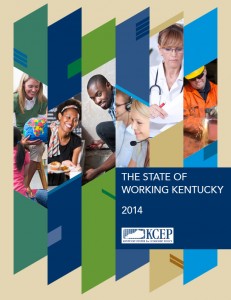 More than five years after the recession officially ended, Kentucky workers still struggle with a scarcity of jobs and face continued declines in real wages, as outlined in KCEP’s new report The State of Working Kentucky 2014.

The report describes the damage done by the Great Recession and the substantial jobs gap that still needs to be closed; examines how today’s economy affects different workers based on age, education, race, gender and other factors; and looks at the disturbing long-term trend in wages that is lowering living standards for many Kentucky workers.

As the report shows, the lack of jobs has led to a decrease in the labor force as many workers have become discouraged from finding work. And even those with jobs face challenges. A record high of nearly one in four Kentucky part-time workers say they would rather have a full-time job if it were available.

Still-high unemployment is a major factor keeping wages down; the late 1990s was the only period in the last 35 years in which Kentucky workers’ wages grew—because the unemployment rate at that time dropped down to four percent. Between 2001 and 2013, the report shows, Kentucky workers’ median wages fell by eight percent after adjusting for inflation, and low-wage workers’ wages fell seven percent. Other factors contributing to sagging wages include the loss of jobs in sectors like manufacturing—and their replacement with low-wage service jobs—and the erosion in the value of the minimum wage.

The report shows that all types of Kentucky workers have been harmed by the shortage of jobs, even those with higher levels of education. It’s been especially painful for people of color, young people and workers with less than a high school degree. Of particular concern are the long-term unemployed, who remain a persistently-high one-third of Kentucky’s unemployed but whose jobless benefits now run out sooner because Congress did not extend them at the end of 2013.

One important countertrend to the challenges faced by Kentucky workers today is the improvement in health insurance coverage as a result of the Medicaid expansion and creation of the state’s new health care exchange, Kynect. Since November 2013, 521,000 Kentuckians have signed up for coverage through Kynect, about 75 percent of whom are newly insured.

There is more the federal and state government can and should do to improve the economic picture for Kentuckians. Policy recommendations in the report include avoiding prematurely raising interest rates and choking off the recovery, putting people to work addressing needs like repairing schools and improving infrastructure, increasing the minimum wage, and passing state tax reform to allow more investments in supports for Kentucky workers.

The State of Working Kentucky 2014