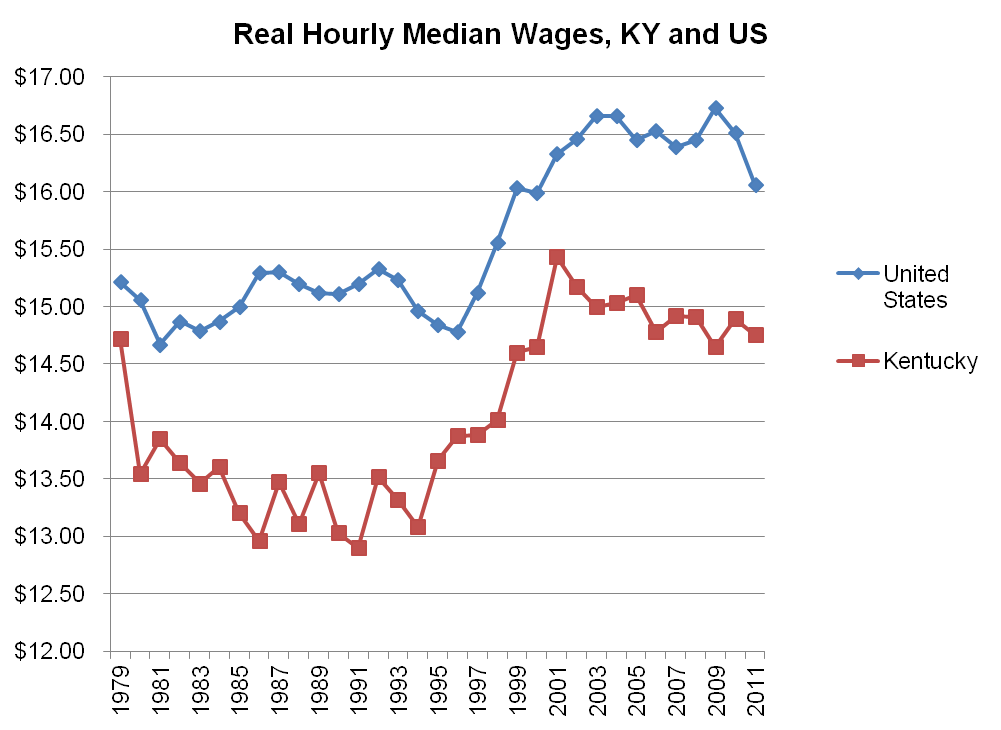 Working Kentuckians have experienced a lost decade in terms of wage growth, a trend that is undermining family economic security across the Commonwealth and will likely persist at least as long as the unemployment rate remains high.

During the last few years of the 1990s and the beginning of the last decade, median wages in both Kentucky and the U. S. climbed considerably. That happened because the nation had practically reached full employment, which by limiting the supply of available workers gave them the ability to obtain somewhat higher wages. The typical worker in Kentucky also gained ground relative to the nation at that time. In 1991, the median wage in Kentucky was only 85 percent of the U. S. average, but by 2001 it was 94 percent.

That progress stopped abruptly with the recession in the early 2000s, and since then median wages have been flat or slightly declining in both Kentucky and the nation. In 2011, real (inflation-adjusted) median wages in Kentucky were 4 percent lower than they were in 2001.

One way Kentucky families are responding to these trends is by simply working more hours. The average two-parent Kentucky family worked 360 more hours a year in 2005 than they did in 1980, an increase of 11 percent.

There are a number of causes of sagging compensation. The two recessions of the last decade and the resulting high unemployment rates play a big role—and will continue to do so until the unemployment rate drops considerably. Declining unionization is also a factor. Unionized Kentucky workers made 37 percent more in 2011 than those workers who weren’t members of a union. Also critical are the weakening of the minimum wage and other labor standards, as well as policies driving globalization and the elimination of good-paying manufacturing jobs.