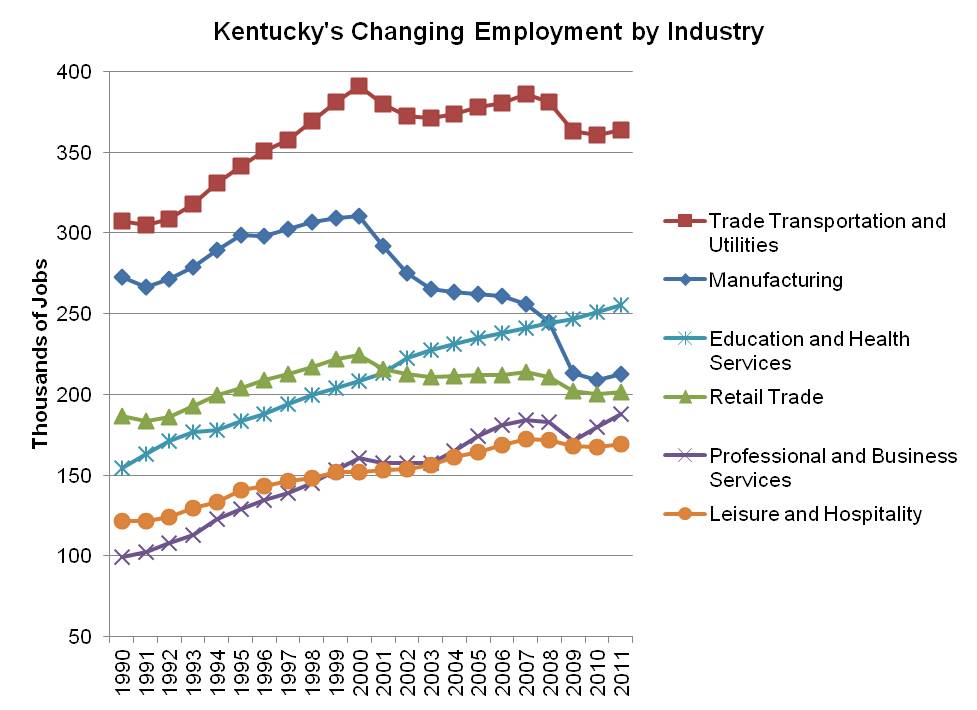 Kentucky’s economy continues to change, with a decline in manufacturing jobs and a shift toward more jobs in the service sector—a trend that has accelerated with the weak economy of the last few years. These changes have big implications for the job quality of Kentucky workers.

Kentucky experienced growth in manufacturing jobs throughout the 1990s, reaching a peak of 310,000 jobs in the year 2000. For about the last ten years, however, manufacturing jobs have plummeted with Kentucky losing nearly one-third of its factory employment over that period. Job loss has been both in durable goods (like appliances and furniture), which declined 35 percent over that time, and in non-durable goods (such as cleaning products and office supplies), which declined 25 percent.

At the same time, service sector employment either grew or remained relatively stable. Employment in education and health services, for example, kept increasing even through the recession-induced period of high unemployment. Professional and business services also experienced only a slight dip in 2008, while the job level for leisure and hospitality services has grown slightly. 201,000 Kentuckians worked in retail in 2011, about as many as worked in manufacturing.

The sector of trade, transportation and utilities is actually Kentucky’s biggest source of employment with 364,000 jobs in 2011, but employment in that sector has been relatively flat for the last ten years. Government employment has also been stable in Kentucky in recent years. Despite the attention given to natural resources and mining, they make up only one percent of state-wide jobs.

There are clear patterns in Kentucky’s changing job mix. Good-paying jobs historically available to those with relatively low levels of formal education, such as in manufacturing and mining, have been declining. Taking their place are service sector jobs, either those that require more education (such as some professional and business services, or in the education and health care sectors) or those that are typically low wage (including retail and leisure and hospitality).

These trends are leading to eroding wages for many low- and middle-income Kentuckians. Yet these changes aren’t entirely inevitable—they are driven substantially by policy decisions at the federal and state levels. Trade and other policies that drive globalization are pitting Kentucky’s manufacturing workers against lower-paid workers in other countries, and few standards apply. Kentucky lacks an adequate state strategy geared toward developing high-wage, high-skill manufacturing jobs, and remains focused primarily on recruiting outside industries based on being a cheap location to do business. The extent of unionization also plays a big role in job quality—the new jobs in the service sector are far less likely to be unionized than traditional jobs in manufacturing.

What’s needed is an approach to building an economy that protects and promotes job quality and economic security for more Kentuckians in all sectors. Otherwise, we’ll see a continuing erosion of what’s left of the state’s middle class.