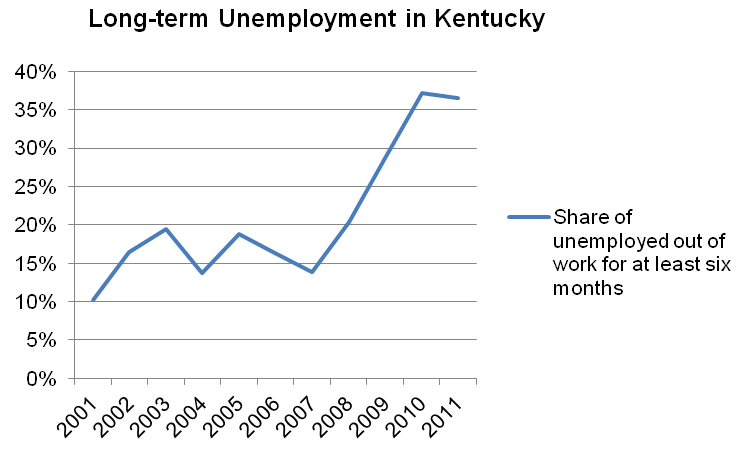 The recession had devastating effects on employment in Kentucky, and the recovery is only gradually lifting the state out of a deep hole. The economy’s collapse drove up the state’s unemployment rate, forced higher levels of part-time work from those who would prefer full-time jobs and led to historically high rates of long-term unemployment.

The length of time that some workers are going without finding work provides an indication of the long-lasting consequences of the recession. Kentucky’s long-term unemployment rate (the share of the unemployed who have been out of work for more than six months) rose from 13.9 percent in 2007 to 36.5 percent in 2011. And while Kentucky’s unemployment rates in recent years are comparable to those in the deep recession of the early 1980s, the state’s long-term unemployment rates from 2009 to 2011 were by far the highest in the past 30 years.

In addition, the underemployment rate was at 15.7 percent in 2011—nearly 70 percent higher than the 9.3 percent rate in 2007. This measure provides a more comprehensive view of the labor market than unemployment as it takes into account workers who have taken part-time jobs to make ends meet but would prefer full-time work; marginally attached workers who would like work but are currently discouraged or are unable to work because of a barrier such as child care or transportation; and those who are unemployed and actively looking for work. The share of unemployed workers who were involuntarily part-time (meaning they would rather have full-time work) in 2011 was 23.1 percent compared to 13.6 percent in 2007.

Kentucky’s economy is in the beginnings of recovery and the unemployment rate is slowly falling, but many of the state’s workers still struggle to find jobs and to obtain full-time work. Most concerning of all is Kentucky’s persistently high long-term unemployment. These workers risk erosion of skills and further harm to employability if overall job growth doesn’t improve more quickly. Kentucky’s jobless will feel the negative effects of continued high unemployment even more deeply if emergency unemployment benefits for the long-term unemployed are not extended past the end of this year.